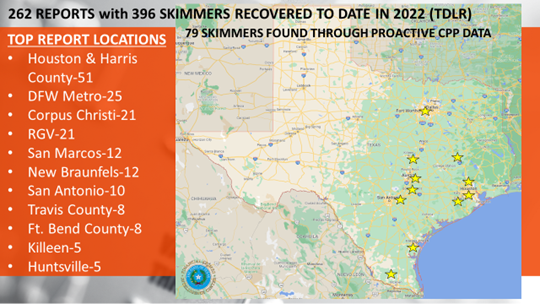 AUSTIN – In its first year, the Texas Financial Crimes Intelligence Center (FCIC) prevented $48,493,324 in monetary losses due to fraud in Texas and recovered 396 credit card skimmers.

The FCIC, which coordinates law enforcement investigations into organized financial fraud, officially opened in Tyler in January 2022. The center – the first of its kind in the United States – was created by House Bill 2106 in the 87th Texas Legislature and operates as a partnership between the Texas Department of Licensing and Regulation (TDLR) and the Smith County District Attorney’s Office. The center’s total two-year budget is $2,650,000.

“The FCIC’s performance in its first year is remarkable. The staff has shown the importance and value of having an intelligence center that concentrates specifically on financial crimes in Texas. As more law enforcement agencies and financial institutions partner with the FCIC, Texas businesses and residents will be safer,” said TDLR executive director Mike Arismendez Jr.

Beyond gas pump skimming, the FCIC has recorded an astronomical amount of fraud from other types of credit card skimming committed by foreign nationals including ATM and point-of-sale skimming that specifically targets state benefit cards.

“The FCIC has put Texas at the forefront of financial crime investigation in the nation. It is the first of its kind and has already proven to be successful for law enforcement and all Texans. Their continued work will prevent millions of dollars in fraud, promote a safe environment for Texas banks and businesses, and deter those who would exploit others from coming to Texas,” said Smith County Criminal District Attorney Jacob Putman.

TDLR provides regulatory oversight for a broad range of occupations, businesses, facilities, and equipment in Texas. The agency protects the health and safety of Texans by ensuring they are served by qualified, licensed professionals. Inspections of individuals, businesses, and equipment are done on a regular basis to safeguard the public. Currently, the agency regulates 37 business and occupational licensing programs with almost 1,000,000 licensees across the state.

Visit TDLR’s website for more information and resources. You can search the TDLR licensee database, and also find past violations in which a final order was issued against companies or individuals. TDLR’s Customer Service line is available anytime between 7 a.m. until 6 p.m., Monday through Friday, at 1-800-803-9202. TDLR representatives are fluent in English, Spanish and Vietnamese.