The Houston Texans closed out their 2022 home game schedule Sunday at NRG Stadium in Houston when they hosted their AFC South rival, the Jacksonville Jaguars.  Houston entered the game a 2-12-1 and Jacksonville came in at 7-8, still alive in the AFC South race.  The division winner will be crowned next Sunday, January 8th when the Jaguars and Tennessee Titans clash in the season finale. 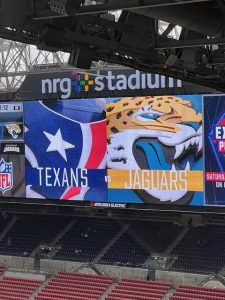 Houston came in hoping to get their first home victory against six home losses and a tie at home.  The game was also the annual Fan Appreciation Day and several big prizes were given away to season ticket holders and there were also a couple of special guests in attendance.

The National Anthem was performed by Kim Cruse, semifinalist of Season 22 of NBC’s The Voice and fans were led on the battle drum by Rico Rodriguez, star of Modern Family and Raini Rodriguez, Rico’s older sister, who is a star of the Disney show Austin and Ally.

Jacksonville won the coin toss to begin the game and elected to defer to the second half to open the game.

Tremon Smith returned Riley Patterson’s kickoff from 2 yards deep in the end zone out to the 26 and Houston set up on their first offensive possession from that point.

As they had done for the previous several games, Houston alternated quarterbacks between Davis Mills and Jeff Driskel to open the game.

The Texans managed to pick up one first down but turned the ball over on downs the next series at their 45 and Trevor Lawrence brought his offensive unit on the field for the first time.

Jacksonville got into the end zone when JaMycal Hasty ran in from the 5 with 8:24 left in the opening quarter.  Patterson added the PAT and the Jags took a 7-0 lead.  The drive was 8 plays, 45 yards and took 3:06 off the clock.

Smith returned the ensuing Patterson kickoff at his 6 and returned the ball up to his 26 and the Texans went back on the offensive for the second time.  It was a quick three-and-out and following a Cameron Johnston punt and a 7-yard return Lawrence and company hit the field again at their 23. 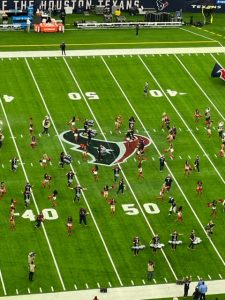 The Houston defense stiffened and forced a Logan Cooke punt from the Texans 40.  The punt was downed at the 1.  The Texans managed one first down due to a pass interference call and then Johnston was forced to punt once again and the Jaguars came out for their third offensive possession of the game at their 35.

On the first play of the possession Travis Etienne, Jr. took a handoff from Lawrence and took it to the house with12:21 left in the first half of play.  Patterson added the point after touchdown and the Jaguars doubled their lead to 14-0.  The drive was just 9 seconds.

On the first play of the possession Davis Mills fumbled the ball and Tyson Campbell grabbed the ball and didn’t stop until he was in the end zone.  Patterson added the extra point and Jacksonville increased their lead to 21-0 with 11:35 left in the first half.

Desmond King intercepted a Lawrence pass at the Houston 21 and Houston had their best starting field position of the game.  They managed to drive down to the Jag 10 and on a 4th and 5 Mills threw incomplete and the Jags took over on their 10.

There was no further scoring in the first half and the Texans headed to their locker room trailing 21-0 with not a lot of positives to focus on from the first half of play.

Jacksonville officially turned the game into a laugher on their first possession of the second half after getting the ball at their 25 following a touchback.  They moved 75 yards in 11 plays over 5:32 and 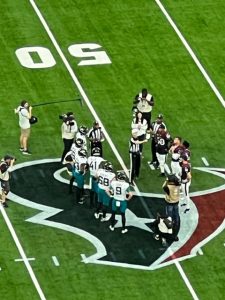 capped the possession off with a 3-yard TD run by Snoop Conner with 9:28 left in the third quarter.  Patterson added the extra point and the visitors led 28-0.

Houston got down to the Jag 38 on their next possession before they were forced to call on Ki’imi Fairbairn for a 56-yard field goal attempt.  The kick was good was 5:49 left in the third quarter and home team fans cheered as their team got on the board to avoid a shutout, but they still trailed 28-3.  The drive was 7 plays, 37 yards and took 3:39.

On their next possession Jacksonville switched to C.J. Beathard.  He drove the Jags down the field, but made a huge mistake at the Texans 5 when Jalen Pitre picked off a pass intended for Marvin Jones, Jr.  He returned the ball up to the 10 and Houston got a chance to try to cut their 25-point deficit once again.

They moved the ball to their 49 but turned the ball over on downs when a Mills pass on 4th and 4 fell incomplete, sending boos ringing down from the stands and fans heading for the exit as they realized there was no possible chance for a comeback for their team.

There was no further scoring in the game and the Jags headed home with a 31-3 laugher over the Texans.  The win evened the Jags to 8-8 on the season while the loss dropped Houston to 2-13-1.  Houston will close out their dismal 2022 season on the road in Indianapolis against the Colts next Sunday.

It was a very disappointed Coach Lovie Smith who faced the media following the humiliating loss.

“Of course, the plan was for us to play a lot better than we did today. We’ve been playing better football than we played today, all three phases. Defensively, we got to tackle better. That’s been a tough spot for us a lot of the year. We had opportunities. These explosive runs, we had been playing them better, but today we didn’t. Too many missed tackles which lead to big plays like that. Offensively, we have to get some points on the board. We were never able to really establish the run. Pass-wise, for protection to just the entire passing game, it wasn’t our day today. Kind of as simple as that.” 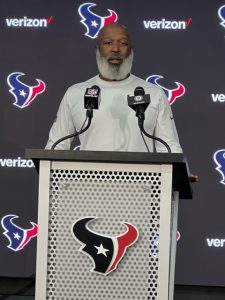 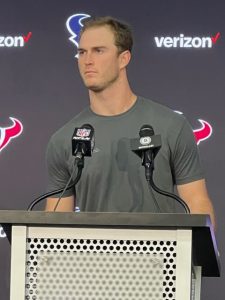 been on him personally.

“It’s tough. You make it so far. You make it to the NFL, and you expect that you’re going to have a chance to win every game. And it’s just been a struggle. The record doesn’t show how talented and how good this team is. We found ways to fight and play teams really close all season long. Just haven’t really had a chance to finish games. That’s something we continue to work on. We have another opportunity to do that next week in a big divisional game versus Indy.”

Hopefully the team can find a way to win the last game of the season against the Colts next week, but even if they do, sadly it will most likely be a one and done scenario for Lovie Smith, which is sad, but the NFL is all about winning.