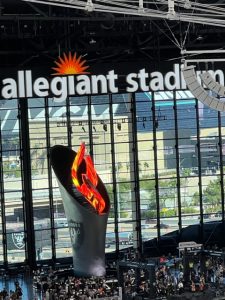 The 1-3-1 Houston Texans traveled west Sunday to take on the 1-4 Las Vegas Raiders at Allegiant Stadium.

Houston won the coin toss and elected to defer to the second half.  Ka’Imi Fairbairn kicked the ball away and it was returned to the Raiders 24 where Derek Carr and company began their first drive of the day.

They managed one first down but Carr suffered a wrist injury on his throwing arm after throwing the pass and was tended to on the field before being ushered to the sideline.

He was replaced by Jarrett Stidham for one play and then Carr returned to the lineup.  Carr moved the team down to the Texans 32 and on 4th and 8, Daniel Carlson nailed a 50-yard field goal with 9:54 left in the first quarter, giving the home team an early 3-0 lead. The drive was 12 plays, 54 yards and took 5:14. 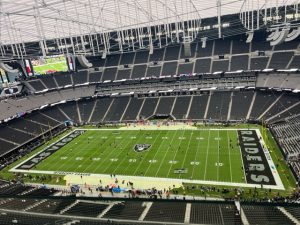 Carlson kicked away to Houston and after the ball landed in the end zone Davis Mills brought the Houston offense on the field for the first time at the Houston 25.

Mills led his unit to the Raider 21 where the drive stalled and on 4th and 6 Fairbairn missed a 39-yard field go, leaving Vegas with the 3-0 lead and Carr and his offensive unit came back on the field and set up on their 29 for their second possession.  The drive was short-lived as the Texans defense swarmed the Raiders and it was a quick three-and-out.

AJ Cole punted the ball away and Houston set up for their second possession at their 40.

Mills led the team down the field and into the end zone for the game’s first TD.  The score came on a 14-yard pass from Mills to Chris Moore with 11:17 left in the first half.  Fairbairn booted the extra point and Houston led 7-3.  The drive was 14 plays, 62 yards and took 6:22. 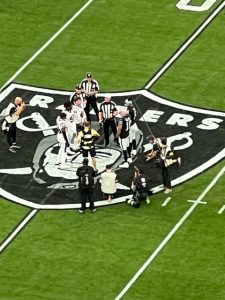 After forcing another punt the Texans moved down the field and with 4:57 left in the first half, Fairbairn connected on a 55-yard field goal to put Houston up 10-3.  The drive consisted of 7 plays, 62 yards and 2:31 off the second quarter clock.

Not to be outdone, Carr led the Raiders on an 82–yard drive that took 12 plays and 4:32.  The drive ended with 25 seconds left in the half when Carr hit Mack Hollins on a 26-yard TD pass.  Carlson added the PAT and the game was tied 10-10.  Houston ran 1 play and the half ended with the two teams tied at 10.

Las Vegas kicked off to Houston to begin the second half.  The Carlson kick was returned to the 16 and Davis Mills led his offense on the field for their first possession of the second half.  He moved the team into field goal position and after 4:01, 9 plays and 67 yards, Fairbairn drilled a 35-yard field goal with 10:59 left in the quarter, putting the Texans up 13-10.

Derek Carr and his unit were not to be outdone and they marched right down the field and the possession ended when Josh Jacobs ran into the end zone for a TD with 5:48 left in the third quarter.  Carlson added the extra point and Vegas recaptured the lead, 17-13.  The drive was 12 plays, 75 yards and took 5:11. 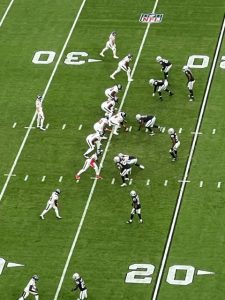 The Texans played tit for tat as they came right back with a TD of their own on their ensuing possession.  The score came with 3:14 left in the third quarter when Mills hit Phillip Dorsett from 25 yards out, ending an 8-play, 74-yard drive that consumed 2:34.  Fairbairn added the point after and Houston regained the lead, 20-17.

Thanks to a false start on a 4th down play, it was a three-and-out for Houston and they had to punt the ball away with 11:29 remaining and down by 4 points.

The Raiders put the game on ice with 7:06 remaining in the game when Jacobs picked up his third TD run of the day, taking it to the house from 15 yards out.  Carlson added the extra point and the Vegas lead advanced to 31-20.  The drive was 9 plays, 76 yards and took 4:15.

Houston got a good drive going on their next possession, but Duron Harmon grabbed an interception off Mills at his 28 and returned it 72 yards for a pick-6.  Carlson made the extra point and the Texans trailed 38-20.

The Texans got the ball back at their 20 after the Carlson kickoff for what would be their last possession of the game.  Carr moved the team down the field to the Raider 14, but a 4th and 6 pass play was incomplete and the ball turned over on downs with 1:07 left in the game.

Carr went into victory formation, running 2 plays and the game ended with the Texans coming out on the short end, 38-20.

A very disappointed Coach Lovie Smith pretty much summed up the game in his opening statement when he met with the media following the loss.

“You know, coming off the bye week, it can go a couple of ways.  I thought we had a good week of practice, whatever a good week of practice means.  I thought we were ready to play and we did some good things, especially offensively because it’s the most production we’ve had offensively, passing the ball, running the ball.  We made some plays, and all the receivers, we spread the ball around.  We did a lot of good things; didn’t finish the way we needed to.  Late in the game when we needed another drive and some more points, the penalty was big of course on fourth down.  Of course, the interception for a touchdown was also.  Offensively, we saw signs of what we can be.  Defensively, we just didn’t play well enough.  It’s kind of as simple as that.  I thought first half-wise we were in pretty good shape; second half we didn’t do what we needed to.  They got the run going and of course Jacobs is a heck of a back, but breakdowns, tackles, just weren’t physical enough and there’s a lot of things.  You’ve got to give them a lot of credit for that.  It doesn’t help when you miss a field goal too.  We left points on the board there.  They definitely deserved to win today.  We’ll keep pushing on.  We get a chance to go into our division next week, but right now of course, a lot of disappointment.”

The Texans will host the Tennessee Titans next Sunday at 3:05 PM at NRG Stadium in Houston and they hope to get things turned around and grab a victory.  They desperately need one!