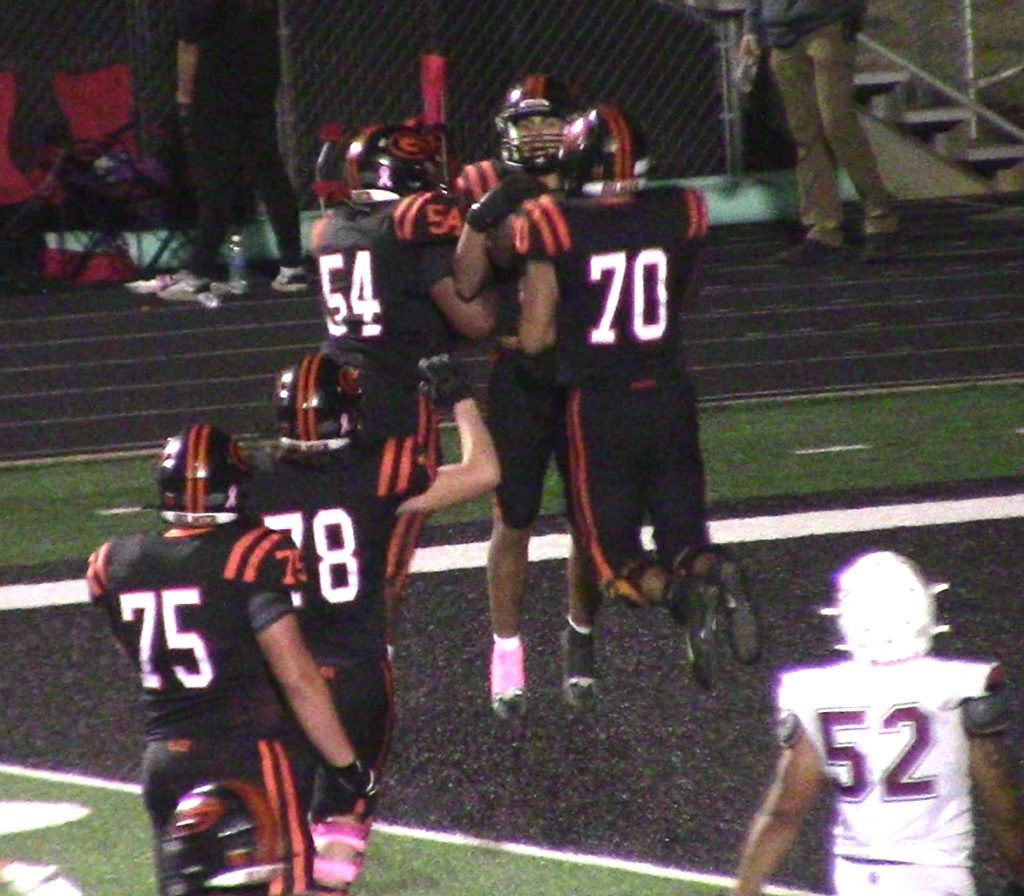 The Gilmer Buckeyes advanced to 6-0 on the season and 2-0 in District 7-4A DII action Friday night at Jeff Traylor Stadium in Gilmer with a 59-20 walloping of the Liberty-Eylau Leopards. With the loss, L-E drops to 5-2 on the year and 1-1 in district action.

To begin the game, the Leopards received the opening kickoff after winning the coin toss and electing to receive.

Jose Govea booted the ball down to the L-E 28 and after a fair catch the visitors began their first possession from that point.

On the first play of the game, Jaydin Hampton hit Telly Wells on a 72-yard TD strike, taking just 12 seconds off the clock and putting the Buckeyes behind 6-0 with 11:48 left in the first quarter. The PAT attempt was no good as the Bucks stormed kicker WT Jones.

Cameron Hadaway kicked off to Gilmer after the score and the ball was returned to the Gilmer 31 by Amauri Hamilton. The Bucks uncharacteristically failed to pick up a first down and turned the ball over on downs at their 31.

The Black Flag Defense came through and got the ball after a turnover on downs by the Leopards.

Realizing they needed to hit the pedal full throttle, Cadon Tennison led the offense on a 4-play drive in 1:14 to get into the end zone for the first Gilmer score with 6:45 left in the opening frame. After an incomplete pass to start the drive Tennison hit Hamilton on a 69-yard pass to the L-E 6 and after a 3-yard penalty for a horse collar the Bucks had a first-and-goal at the 3. Two plays later Ashton Haynes ran in from the 3 to tie the score at 6-6. Govea nailed the PAT and Gilmer led 7-0.

Coach Alan Metzel chose to kick onside following the score and Gilmer’s Will Henderson recovered at the Leopard 48.

It took just 1:27 and 5 plays for Gilmer to find the end zone for the second time in the game. The score came on a 21-yard run by Henderson with 5:18 left in the first quarter. Govea added the extra point and the Buckeyes led 14-6.

The Leopards began their next drive on their 28. The Black Flag forced a three-and-out and following a booming 48–yard punt by Hagen Power, the Bucks set up on their 19.

Tennison and company picked up one first down and then punted the ball back to the Leopards at their 30. The Black Flag forced another three-and-out and following a 29-yard punt, Gilmer set up shop on their 37.

It took just 2 plays and 41 seconds for the Buckeyes to find the end zone for the third time. Will Henderson picked up 2 yards on the first play and then Tennison hit Rohan Fluellen on a beautiful 61-yard pass and run into the end zone. Fluellen cut across the field and outran the L-E defense for the score with 11:04 left in the first half. Govea added the extra point and Gilmer moved out to a 21-6 lead.

The visitors marched right back down the field on a 2-play 66-yard TD drive that took just 1:07. The score came on a 63-yard pass from Hampton to Dequane Prevo. A 2-point conversion attempt was no good and the score moved to 21-12 with Gilmer still in the lead.

Both teams went three-and-out on their next possessions, and L-E punted from their 1 to their 36 where Rohan Fluellen grabbed the ball and outran the defense 36 yards into the end zone for the fourth Gilmer TD of the night. Govea added the point after and the Gilmer lead moved out to 28-12 with 6:15 left in the first half of play.

The Leopards got the ball at their 44 after the next kick and return and moved the 56 yards into the end zone in just 1:29 and 4 plays. They went for a 2-point conversion once again and the kick was good, closing the Leopard deficit to 28-20 with 4:46 left in the half.

After beginning on their 31 on their next possession, it was a quick three-and-out and after a 39-yard Guillen punt, the visitors were back in business at their 25 with 2:31 left in the half.

Hampton moved his team down the field and it looked like they might find the end zone again, but Cade Bowman had something else in mind. He intercepted Hampton at the L-E 12 and returned the ball 88 yards down the left sideline into the end zone with 18 seconds left in the half. Govea added the extra point and Gilmer moved ahead 35-20. Bowman’s pick-6 was the LONGEST in Buckeye football history, as he surpassed the previous record of 81 yards on a pick 6 by Lamar Harris. Thanks to Cade’s dad, former GHS Principal Brian Bowman, for providing that information to us after seeing it posted on Smoaky.com.

The Leopards fair caught the kick at their 27 and Hampton took a knee and the half ended with Gilmer back to a semi-comfortable 35-20 lead and the team knew they would be receiving the second half kickoff.

Rohan Fluellen took the second half kick at the Gilmer 2 and returned the ball to midfield where Tennison and the offense set up shop for the first time in the half.

It only took 2 plays and 51 seconds for the Buckeyes to move the 50 yards and find the end zone yet again. Haynes ran for 4 on the first play and followed that up with a 46-yard TD run with 11:09 left in the third quarter. Govea was true on the kick after the score and the lead advanced to 42-20.

The Black Flag forced another three-and-out following the kickoff after the score and after a 25-yard punt to the L-E 38 Gilmer was in business again.

The Bux managed another TD on the possession. The drive was a 6-play, 38-yard affair that consumed 1:30 off the third quarter clock. The score came with 7:40 left in the quarter when Tennison hit Eliez Castillo from 7 yards out. Govea added the PAT once again and Gilmer had a 49-20 blowout lead.

To add insult to injury, on the ensuing popup kickoff the ball bounced in front of a Leopard player and Jamar Byrd recovered the ball and Gilmer went back on offense at the L-E 28.

Once again, the offense found the end zone again. This 28-yard drive was 6 plays and took 1:48 off the clock. The score came on a 4-yard run by Haynes with 5:49 left in the quarter. Govea was true on the point after touchdown and the game officially became a laugher with Gilmer leading 56-20.

The Black Flag forced another three-an-out and after a long punt Gilmer set up on their 16 with 2:26 left in the quarter.

The Buckeyes chewed up yardage on the ground, moving 80 yards in 12 plays over 6:38. The drive had second team players in the better part of the drive. The possession ended with a Govea 21-yard field goal with 7:48 left in the game, moving the score to 59-20.

The ensuing kickoff was muffed by the Leopards and the Buckeyes recovered the pigskin at the L-E 39. Gilmer went for a first down on 4th and 6 and fell 3 yards short and L-E took over at their 32.

The Black Flag forced a three-and-out and took over for their last possession of the night at their 41. After picking up one first down on the possession the ball turned over on downs on the next series.

L-E managed a 12-yard run and then the clock ran out with the Buckeyes claiming the 59-20 impressive victory.

We talked with Coach Alan Metzel after the big win and asked his thoughts on the game.

“They came out and made some really good plays. I thought we at times were a little bit more uninspired than I would like and we had to get some of that fixed at halftime. I thought that the seniors took over at halftime and said ‘hey, men, this isn’t the standard we want.’ They came out and took it up a couple of notches and took care of the game.”

We asked the coach if he agreed that the turning point of the game was the 88-yard pick-6 return by Cade Bowman.

“Oh no doubt; they’re over there in plus territory and Cade makes a great read, makes the catch and then you see the Buckeyes running down the field and he’s following them the whole way. Great job. It just goes back to they do that every week and they did it when they needed it right there before half. It was a big boost.”

We asked Coach Metzel if he felt maybe there was a bit of a letdown by the Black Flag Defense in the first half before they stormed back lights out in the second half.

We also discussed that following the pick-6 and the score to begin the third quarter that everyone felt the game was over at that point.

“I think so. It was one of those where you could feel the momentum at that point had come our way and our guys felt the confidence and they felt a little deflated, so at that point you can just feel the shift.”

We mentioned that L-E Coach Dewaski Davis was to be commended for the fantastic job he has done in just his third season at the helm of turning the Leopards into a sportsmanlike team that is totally different from the team he inherited when he went to Texarkana.

“(I have) nothing but respect for the man. He does it the right way. He’s a first class act to work with all through the week talking, during the game. He’s in the same business we are; trying to grow men. I can’t compliment him enough.”

We also talked about the fact that the offense had their best output of the year and was clicking on all cylinders in the second half.

“We made some little adjustments in our blocking. Our O’line took it up. The backs, they were really hitting the hole hard in that second half and burst into the secondary. It was just fun to see us get untracked.”

As is the case almost every week, we had to ask Coach Metzel his thoughts on Cadon Tennison and Rohan Fluellen’s performance in the game.

“It’s just amazing. You know, Ro, he just led. He led with his actions. He does it every week thought. Cadon’s continuing to grow. I felt like in a lot of ways, and these were things that you would have to be on the sideline, in his confidence and the way he’s seeing the game, he’s really improving. His confidence is growing, but having that 1-7 (Fluellen’s number) to go to out there when you need him, that’s a big help.”

When we asked his thoughts about the fact that after moving to 2-0 and playing the two teams closest in talent level to the Bucks if he agreed that the district championship was pretty much sewed up, his response was, “Well our focus is getting better. That’s going to be our focus this whole week, Monday, Tuesday and Wednesday and then you’ll have the Yamboree, you’ll have all sorts of things going on. (There’s) lots of potential distractions. Can we stay focused? Can we take another step up from that rung where we want to be when the playoffs start, etc.? We’re grateful that we’re 2-0 against two really good teams, but then again, we’ve got to defeat ourselves next week, and I mean from the standpoint of we want to be better than we were this week.”