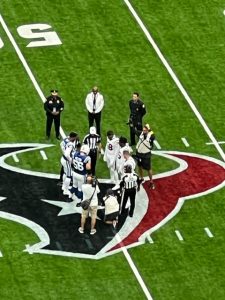 The Houston Texans officially began the Lovie Smith era at NRG Stadium in Houston on Sunday when they entertained their AFC South rival the Indianapolis Colts.  They were hoping to start the season with a win, but after building up a 20-3 lead the game was tied at the end of regulation.  Neither team managed to light up the scoreboard and the game ended in a 20-20 tie.

The game had a lot of electricity for a couple of reasons.  To begin with it was the anniversary of 911 back in 2001 when the Twin Towers were destroyed and lives lost due to the horrific terrorist attack on the US.

Additionally, the Texans honored First Responders at halftime of the game, and most significantly, the team flew the Uvalde High School football team was flown to Houston for the game by the Texans and treated to the game in a suite with food and beverages.

Houston won the coin toss and elected to defer to begin the game.  Indy went three-and-out and the Texans followed on their first possession going three-and-out as well as the defenses dominated early on.

The Colts began the scoring with a 45-yard Rodrigo Blankenship field goal with 5:13 left in the first quarter, capping off a 12-lay, 47-yard drive that consumed 6:46 off the clock and gave Indy a 3-0 lead.

Houston went three-and-out again on their second possession and following a Cameron Johnston 49-yard punt and 9-yard return, Indianapolis and Matt Ryan making his debut at quarterback for the Colts went back to work again.

The Houston defense stepped up big when the stacked up the Colts at the Houston 4 on a 4th and goal with 14:10 left in the first half.

Following a touchback on the ensuing kickoff Ryan and company set up on their 25.  The colts moved down to the Houston 25 when Jerry Hughes intercepted Ryan at his 28 he and returned the pick to the Texans 42 with 4:26 left in the half.

Houston got a break on the possession when Indy was called for 33-yard defensive pass interference, setting the ball on the 16.  They took advantage of the turnover when Mills hit OJ Howard from 16 yards out with 2:37 left in the first half  Fairbairn added the extra point and Houston took a 10-3 lead.  The drive was 4 plays, 58 yards and took 1:49.

Indy began their next drive at their 25 following a touchback on the kickoff.  Ryan led the Colts down the field with the two minute offense, hoping to get into the end zone to tie the score before the half.  It looked as though that might be the case, but the Houston defense stepped up and forced a punt and following a fair catch the Texans took over on their 14 with 38 seconds left in the first half of play.

Unlike his predecessors Bill O’Brien and David Culley, Lovie Smith didn’t take a knee and end the half.  He tried to move the ball into field goal range.  The plan didn’t work, but Mills led the team up to the Houston 48 when the half came to a close with the Texans leading 10-3 and getting the ball to begin the second half of play.

After a touchback on the kickoff Houston set up shop on their 25 and Smith got into his bag of tricks and called a flea-flicker and it worked, gaining all the way down to the Indy 33.  The drive stalled, but Fairbairn booted a 43-yard field goal with 12:17 left in the third quarter, extending the Texans lead to 13-3.  The drive was 5 plays, 50 yards and took just 4:43.

The Colts were moving on their next possession when Christian Kirksey recovered a fumble at the Houston 42 and Mills and company got the ball back again.

Mills and the offense moved methodically down the field and the drive ended when Mills tossed his second TD pass to OJ Howard with 7:16 left in the third quarter.  Fairbairn added the extra point and Houston advanced the lead to 20-3.  The 58-yard drive consisted of 4 plays and took just 1:40 off the clock.

Fueled by the success of the offense, the defense came to life again on the ensuing Indy possession and it was a quick three-and-out.  Matt Haack boomed a 70-yard punt that put Houston in a precarious passion at their 1.  The managed to get out of the jam and moved the ball down to the Colts 42, but the drive stalled and Johnston punted the ball away and Indy took over at their 15 as the fourth quarter began.

Ryan finally got his offense on track on the possession as he found openings in the Houston defense and threaded the needle numerous times on a drive that concluded with a Blankenship 27-yard field goal with 10:44 left in the game after another great defensive stand by the Texans.  That closed the gap to 20-6.  The drive was 11 plays, 76 yards and consumed 4:02 off the fourth quarter clock.

DeForest Buckner recovered a Mills fumble on the next Houston possession at the Houston 20 and the Colts had new life with 9:49 left in the game.

It didn’t take long for Indy to score their first TD of the day when Jonathan Taylor ran into the end zone from 2 yards out with 7:42 left in the game.  Blankenship added the point after and the Colts were within striking distance, trailing 20-13.

The Texans got the ball back at their 25 following a touchback of the next kick knowing that they urgently needed to move the ball and put points on the board to take the momentum back.  After picking up one first down Johnston was forced to punt the ball away again.  The 49-yard punt was returned from the Indy 13 up to the 20 and the Colts got the ball back with momentum and a chance to tie the game with a TD and extra point.

The ensuing Blankenship kickoff went out of bounds at the Houston 1 and the Texans got a much needed break with the ball being spotted at their 40 to begin a critical drive.  Unfortunately, the offense was able to gain only 4 yards on the possession and Johnston punted the ball away.  There was a fumble but the Colts recovered at their 9 with 1:16 left in the game.

The Houston defense forced a much-needed three-and-out and Haack punted the ball out of bounds at the Houston 19 with 11 seconds left in regulation play.  Mills took a knee and the game headed for overtime with the teams tied up 20-20.

Houston won the overtime coin toss and elected to receive.  The kick went out of bounds for a second time at the 2-yard line and Houston had a second chance to start with a break with the ball moving out to the 40.

It was a sad possession as the Texans lost 7 yards on the first play and Blankenship had to punt away on 4th and 25.  Following a short return the Colts took over at their 31 needing just a field goal to make an unlikely comeback and pull off the road win.

Ryan picked up a first down on a rush on the first series of the possession and Indy was on their way to victory.  The Colts move down to the 24 and on 4th and 10 Blankenship attempted a 42-yard field goal to end the game.  The kick went wide right and was no good and the Texans got the ball back at their 32 with 1:57 left in overtime.

After picking up 8 yards on first down Houston was called for a false start.  They managed to get a first down on the series and began to move the ball.  A bad decision on 3rd down on the next series forced a 2-yard loss and a Houston punt.  Johnston booted the ball down to the Indy 6 and the Colts had one last chance with 20 seconds left in OT.

The Colts ran the first play and gained 1-yard and called a time out with 2 seconds left and gained 10 yards on the last play of the game, ending the contest in a 20-20 tie.  The tie was the FIRST tie in Texans history.

When he addressed the media following the game, Coach Lovie Smith said he was disappointed in the outcome considering the fact his team had built a 20-3 lead before the Colts made their big comeback.

“To start the game off, you want to have a winner, you want to play well. We had our opportunities. We talk a lot about finishing. We didn’t finish the way we would like. 20-3 lead at home, you would like to think you could finish that off, but we didn’t. Some good things we did early on to get 20 points. Offensively, O.J. Howard coming in, making an impact right away the way he did. But never really got the running game going completely, so the passing game can help an awful lot. Passing the ball though. And I thought the big sack there where we had turnover, I think we were plus two at the time, turnover ratio-wise, that really gave them momentum going the other direction. They were holding on at the end. Both teams were a little tired there at the end. We had control, they had control, of course, with the field goal, and once they missed it, we had an opportunity. On the third-down play before the fourth-down play we had, the plan wasn’t to lose yards on that, and I made a decision on 4th-and-3. And there’s a lot of football left going into the season. It’s kind of simple as that. I felt like a tie was better than a potential loss. Defensively, we weren’t really stopping them an awful lot there at the end.”

Houston doesn’t get a break as they travel to the Mile High City Sunday to take on Russell Wilson and the Denver Broncos.  Hopefully they will be able to get a lead next week and close things out and head back to Texas with a win.