The Gilmer Buckeyes traveled to Tyler Friday night to open the season against the Chapel Hill Bulldogs in a much-anticipated game with statewide interest. 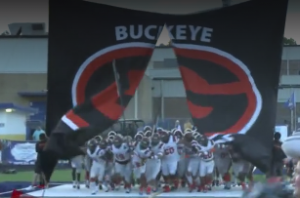 Gilmer came into the contest as the #2 ranked Class 4A-DII team in the state while Chapel Hill came in as the #3 ranked Class 4A-DI team.  The game was tabbed as one of the Top 10 games in the state and the contest lived up to its billing.  Gilmer was tabbed as a 7-point favorite by the matchup predictor calpreps.com, but when the final gun sounded the Buckeyes had created an amazing 7 turnovers and cruised to a 51-27 victory in the first start at quarterback for Cadon Tennison who did an admiral job in his debut  replacing his brother Brandon.

The CH offense moved the 62 yards into the end zone for the first score of the game in 8 plays that took 2:42 off the clock.  The score came on a 5-yard TD run by Rickey Stewart with 7:38 left in the opening quarter.  After a successful PAT by Aiden Campo Chapel Hill led 7-0.

It didn’t take long for the Buckeyes to respond, as Ta’Erik Tate took the ensuing kickoff at his 21and returned it 79 yards into the end zone for a touchdown.  The play took just 7 seconds.  Jose Govea booted the extra point and the game was tied 7-7 and the Buckeyes took command from there.

The ‘Dogs began their second drive at their 24.  On the second play of the possession Aron Bell intercepted a Brisbon pass at the Chapel Hill 21 and returned the pick to the 5.  It took just 2 plays for Gilmer to find the end zone again when Ashton Haynes ran in from the 7 with 6:01 left in the first quarter.  Govea added the extra point and Gilmer had their first lead of the night, 14-7, and a lead they would never relinquish.

After a fair catch of the next Govea kickoff at the Bulldog 28 Brisbon threw another pick at his 41 to Ta’Eric Tate who returned the pick to the 21.

It took just 1 play and 1 second for the Buckeyes to get into the end zone again.  Cadon Tennison hit Ashton Haynes for the 21-yard score.  Govea added the extra point and Gilmer was up 21-7 with 4:24 left in the 1st quarter.

Chapel Hill responded with 62-yard drive in 3:40 over 7 plays to light up the scoreboard for their second touchdown.  The score came on a 1-yard TD run with 44 seconds left in the quarter.  The extra point was good and the Bulldogs closed the gap to 21-14.

It was a quick three-and-out for Gilmer on their next possession, but after setting up on their 40 following an Orona punt, Brisbon threw his third pick of the night to Rohan Fluellen at the Gilmer 23 with 10:20 left in the first half of play.

Tennison came in and led the offense on a 5-play, 77-yard scoring affair that took 2:04 off the clock.  The score came on a 2-yard run by Tennison with 8:16 left in the half.  Govea added the point after and Gilmer extended the lead to 28-14.

Chapel Hill picked up one first down on their next possession before punting the ball back to the Buckeyes at their 38.  It took just 6 plays and 1:53 for the offense to move the 62 yards for their fifth TD of the game.  The score came on a 32-yard pass from Tennison to Tate with 3:59 left in the half.  Govea’s kick sailed just right of the goal post but Gilmer advanced the lead to 34-14.

The Bulldogs began their final drive of the half at their 31 and got a good drive going, picking up two first downs before Brisbon threw another pick to Fluellen at the Gilmer 17 with 27 seconds left in the half.

The offense came out and Tennison took a knee and the teams headed to the locker room as the first half came to a close.

Govea kicked off to the Bulldogs to begin the second half of play.  Following a 29-yard return the ‘Dogs began their first drive of the second half at their 30.  Brisbon led his unit down the field, moving the 70 yards in 8 plays and 4:02.  The drive ended with Brisbon closing it out with a 5-yard run into the end zone with 7:58 left in the third quarter.  Campos added the extra point and the Buckeye lead was down to 34-21.

The Buckeyes punted the ball away on their ensuing possession and after a fair catch at the 7 Brisbon led his troops on the field again.  On the third play of the possession the Black Flag Defense recovered a loose pigskin at the Chapel Hill 8 and the Tennison and the offense were back to work once again.

The Bulldogs began at their 28 on their next drive and moved the ball 72 yards in 8 plays and took 2:09 off the clock before Brisbon tossed a 2-yard TD pass with :16 left in the third quarter.  A try for a 2-point conversion was no good, but CH was back in the game, trailing 37-27.

The two teams then exchanged punts before the Bucks set up on their 5-yard line for what would be an amazing 9-play, 95 yard TD drive that took 3:01.  The score came on a 9-yard run into the end zone by Ashton Haynes with 6:47 left in the game.  Govea kicked the extra point and Gilmer was back in full control by the score of 44-27.

Things got worse for the hosts when on the second play of their next possession they put the ball on the ground again and Gilmer recovered at the Bulldog 22.

The Buckeyes took 4 plays and 1:23 to move the 22 yards into the end zone for their final score of the night.  The TD came on a 10-yard run by Ke’Vion Brinkley with 4:44 left in the game.  Govea was successful on the extra point attempt and Gilmer led 51-27.

The Bulldogs fumbled the ball away again on the third play of their next possession and the Black Flag recovered once again but it was a quick three-and-out before Govea had to punt the ball away one last time.  Chapel Hill ran 4 plays and the game ended with the Buckeyes claiming the impressive victory.

According to Gilmer Buckeye Historian Joe Dodd this was the 9th meeting between the two teams and Gilmer is now 9-0 in those contests.  The win was the 21st consecutive opening game win for Gilmer, with the last loss being 20-14 to Gladewater in 2001.

Following the big win we visited with Defensive Coordinator Tommy Edwards and we began by asking him if he had ever seen a more complete Black Flag ball hawking unit than the 7 turnovers the defense forced in the game.

“I haven’t to be honest with you.  I’ve been around for a while but I have not seen the tenacity that we had and the turnovers that we caused.  We knew coming in we had to get some takeaways and put them in some long downs.  They’ve got some dudes over there and we got sloppy there for a while and missed tackles and had blown assignments, but we never strayed the course.  We stayed on course and did what we were coached to do and it showed in the end.”

We pointed out that the performance was particularly impressive since it came against a #3 ranked team.

“We’re continuing to build up the depth.  We’ve got to get the depth, especially early in the year when it’s so hot.  We played a lot of kids tonight.  I know the defensive line played at least 9 kids.  That’s a tribute to the defensive line coach.  You look at other teams and they play the same kids all the time.  Getting 9 guys to play, that’s impressive.  We’ve got to keep getting

better and better each week and not rest on this.  Great win; unbelievable win, so proud of the kids, but we’re looking at Kilgore right now.”

When we visited with Head Coach Alan Metzel we first asked his thoughts about the Black Flag forcing 7 turnovers against a Bulldog team that made it to the State Semi-Finals in Class 4A-D1 last year and returned 10 starters.

“(It was) just an amazing job.  Number 1, Coach Edwards did a fantastic job scheming what they did.  There were so many things where he had guys where they didn’t know we would have people, and so they’re throwing a pass and we had a guy sitting there.  It’s like they were throwing it to us.  That is an example of a lot of studying, film work, so it was a super job on his part.  And then you’ve got guys who went out and executed it.  And then on top of that you had many guys who were going down with cramps and fatigue and we’re throwing in new guys and we talked the other day about how we’re going to play a lot of people and they just came in and made plays.  That fires me up as much as anything about the defense.  You’re talking about a large number of people who made plays tonight and that’s very impressive.”

We also asked the coach if in his wildest dreams he would have thought the Buckeyes could have put up 51 points on the Bulldogs in the game.

“Well let’s just say I wasn’t going to hold my breath on that!  I know that we have skill players but I also knew this was going to be a big stage for a lot of guys who hadn’t been playing.  I’ll tell you, I thought our line, 4 out of 5 new starters, man; very few miscues, doing a great job giving us time, creating holes, getting a push.  You saw we used just about everybody on the sidelines.  We had a stable go out there.  Tremendous job; tons of things to work on, but hey, what a great start to start building on!”

We asked Coach Metzel if he wouldn’t agree that the Black Flag was in mid-season form, to which he replied, “I have high expectations of them and they lived up to every single one of those tonight.”

We concluded by pointing out that the offense suffered no turnovers in the game.

“That was huge, and they had like 7!  When you win the turnover battle like 7 to 0, you’re probably going to win the game.  It’s a testimony to their talent that they just kept on making plays, you know.  They weren’t going to ever make it easy for us.  Credit to Jeff Riordan and the Chapel Hill guys.  They’re going to have a great year.  They are very talented.”

After the big opening game of the season the Bucks will have their home opener next Friday, September 2 when they host the Kilgore Bulldogs at Jeff Traylor Stadium.  They opened the season ranked #9 in Class 4A-DII, but they will most certainly drop after being blown out by Carthage Friday night by the score of 45-10.

We want to thank the Army of Buckeyes for showing up en masse for the game and ask you to be sure to be in your seat when the Bucks grab their second victory of the season at home against Kilgore.