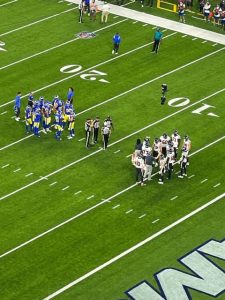 Fresh off their eleventh hour preseason come from behind 17-13 victory over the New Orleans Saints last Saturday night at NRG Stadium in Houston, the Texans took to the road Friday night as they travelled to Los Angeles to take on the World Champion Rams at SoFi Stadium for their second of three preseason games.  The Rams defeated the Chargers at SoFi last Saturday night.

Houston won the coin toss and elected to receive to begin the game.  Following a 23-yard return the Rams set up shop at their 19.  John Wolford started at quarterback for LA.  Matthew Stafford was not suited up for the game.  The possession was a three-and-out.  Riley Dixon punted the ball back to the Houston 20, but Houston was called for offsides on the play, giving the Rams a first down. Once again the Texans forced a three-and-out.  Dixon punted the ball down to the 20 once again where Desmond King returned it to his 32.

Starting quarterback Davis Mills began the game under center.  The offense picked up a couple of first downs and then they were forced to punt the ball away from the Ram 40.  Cameron Johnston’s punt went into the end zone and LA took over on their 20.

Wolford led is unit down the field but Houston came up with a couple of big stops and forced a 43-yard field goal attempt by Matt Gay.  The kick was good with 4:49 left in the first quarter, giving the hosts a 3-0 lead.  The drive was 8 plays, 55 yards and took 3:25.

There was no further scoring in the opening frame and the second quarter began with the Rams up 3-0.

The contest turned into a defensive struggle as several substitutions came in for both teams in the second quarter and neither team could put a sustained drive together.  Tragedy hit Houston when Rex Burkhead fumbled the ball away to Derion Kendrick who returned the ball to the Houston 20.

The Houston defense took care of business and forced a 36-yard Gay field goal attempt.  The kick was good and the Rams took a 6-0 lead with 40 seconds left in the first half of play.  The drive was 4 plays, 2 yards, 50 seconds.

Following Gay’s kick out of the end zone Houston began at their 25.  Mills hit Philip Dorsett for 32 yards and a 15-yard late hit penalty was added to the play, setting Houston up with a first down on the LA 18.  On the next play Mills hit Nico Collins for an 18 yard TD pass with 1 second left in the half.  Ka’imi Fairbairn added the extra point and Houston led 7-6.  Following

an onside kick by Fairbairn that was recovered by LA, Houston took a 7-6 lead in the locker room at halftime.  The drive was 7 plays, 75 yards and took 39 seconds.

The Texans received the second half kickoff and Kyle Allen came in at quarterback.  It was a quick three-and-out after the kickoff and after a Johnston punt and Rams return LA set up shop on their 22.

Bryce Perkins took over at quarterback for the Rams on their first possession of the half.  They also had a quick three-and-out and after a Dixon 54-yard punt and 30-yard return the Texans set up shop on the LA 48.

Allen moved his unit down the field toward the end zone and the drive ended when Allen hit Teagan Quitoriano from 6 yards out with 5:58 left in the third quarter.  Fairbairn added the PAT and Houston extended their lead to 14-6.  The drive was 10 plays, 48 yards and took 5:48 off the clock.

Things went south quickly for the Texans.  The forced a Rams punt but Chester Rogers fumbled the ball away after a hard hit by Duron Lowe.  Roger Carter, Jr. scooped up the loose pigskin and ran it into the end zone with 3:11 left in the third quarter.  Gay hit the extra point and the Houston lead was cut to 14-13.

The Texans went back on offense at their 25 after Gay’s kickoff went out of the end zone  Allen moved the offense down the field and at the end of the third quarter the Texans had a 1st and 10 at the Rams 38.

They managed one more first down before the Rams shut the door on any Houston hopes of a TD on the possession.  On 4th and 7 from the LA 24 Fairbairn came in to kick a 42-yard field goal that moved the score to 17-13 in favor of the visitors with 12:46 left in the game.  The drive was a 12-play affair that covered 51 yards and took 5:25 off the clock.

LA got the ball back at their 25 after Fairbairn’s touchback kick.  Perkins led the offense methodically down the field, aided by a face mask call and the drive ended when Trey Regas ran into the end zone from the 7 with 5:11 left in the game.  Gay added the PAT and the Rams reclaimed the lead, 20-17.  The drive was 13 plays, 75 yards and consumed 7:35.

Jeff Driskel came in at quarterback on the ensuing Houston possession.  He led his unit on a 12–play, 82-yard drive that consumed 4:06 off the clock for what would be the winning score.  The TD came on an 8-yard pass from Driskel to Mason Schreck with 1:05 left in the game, and was aided by a 46-yard pass interference call against the Rams.  Fairbairn added the extra point and the Texans led 24-20.

The defense did their job following the kickoff and the clock expired, giving Houston the 24-20 win that moves them to 2-0 in the preseason with one more game left next Thursday night, August 25th at NRG Stadium in Houston when they will host the San Francisco 49ers.

We asked Coach Lovie Smith in his post-game press conference what it did for the confidence level of the players even though it is still in the preseason to win the game two weeks in a row on the last offensive possession.

“You’re right; it’s a preseason game.  We realize that and we’ll start over in a few weeks, but the way we’re playing, it is important.  You talk about the way we do things; it helps when you have positive results at the end, so that’s all good.  For me and our team and our coaching staff, we played a home game and then to go on the road and I guess nine times we’re going to go on the road this year, that was big also.  I liked the way the guys carried themselves and they do what we ask them to do.”

We also asked how big it was that starting quarterback Davis Mills moved the team 75 yards in just 39 seconds before the TD score with just 1 second left in the half.

“It was big.  It’s about those situations at the end of the half, end of the game where you can earn your money.  You want your quarterback, you know to have that opportunity, and of course to produce, and they did.”

We asked Mills when he addressed the media how it felt to play the entire first half of the game.

“It was good; obviously more playing time than last week.  I felt good out there.  I missed a couple of throws that I would like to have back.  I thought we played well; full team effort, ran the ball well and made plays on the edge.  The defense made some big time stops.”

We also asked him is thoughts on the 75-yard drive before the half and he responded, “it was awesome.  Obviously, we made some big time plays.  We didn’t have much going on before that, so it was kind of nice to end the half with a score.”

It is just preseason, but having observed the team in Training Camp and watching the first two preseason games in person, this writer believes if the confidence continues to grow that Houston has a realistic shot to win 8 or 9 games this season.  Time will tell if that comes to fruition!