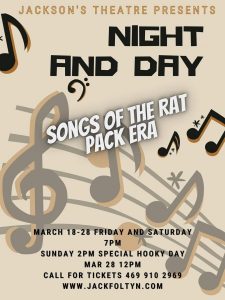 Jackson’s Theater in Gladewater, TX along with Britt’s Wine and Dine of Kilgore, TX will host a tribute show called Night and Day featuring Rat Pack and the Big Band Era. Audiences will hear the songs that made music history including some crooning along with Frank Sinatra’s and Dean Martin’s most popular hits. Several of the World Famous Kilgore College Rangerettes will also be on hand as a welcome to opening night at the theater.

“This will be a tribute to all songs of the Big Band Era. There will be some campy, some comedy and wholesome music arranged by David Morris and myself,” said Jackson Foltyn. “We are trying to bring a more culturally diverse show to the area. Not everyone is an Elvis impersonator fan or a Johnny Cash fan. “We want to be a little different, bring a good show and a good laugh.”

Three other singers will be joining him including Peter Gerbine III from Gladewater, Gary Eoff, and Randi Meryl from the Dallas area accompanied by a 7 piece band. One of the band members will be Dallas Hart from Gladewater, who played the piano at the former Opry House.

The historical Opry House that had once featured such artists as Elvis Presley, Jerry Lee Lewis and Johnny Cash was purchased by Jackson Foltyn in the latter part of 2021. Expect tradition with a contemporary twist and an upscale atmosphere with more to come.

Tickets for Night and Day A Tribute to the Rat Pack and Big Band Era at https://www.eventbrite.com/cc/night-day-160049 or 903-702-0020 and at the door. A portion of all ticket sales will go toward Autism Research and Development.