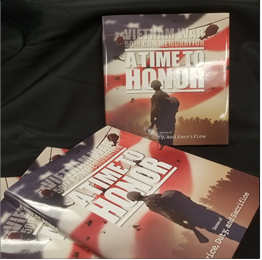 AUSTIN, TX – National Vietnam War Veterans Day, March 29, is a day to thank and honor our nation’s Vietnam veterans and their families for their service and sacrifice and to remember those still listed as missing in action. The day honors the millions of servicemembers and women who served in Vietnam, provides further remembrance of those who became prisoners of war; and commemorates the more than 58,000 who paid the ultimate sacrifice and the more than 1,600 who are still missing in action.

Commemorations and ceremonies are planned across various cities throughout Texas and the nation. Texas is home to 1.7 million veterans. Over 500,000 Texas veterans, both men and women, served in Vietnam.

To honor the Texans who served in Vietnam, a special Texas limited edition Vietnam War commemorative book A Time to Honor: Stories of Service, Duty, and Sacrifice is available to them, through the Texas Veterans Commission, compliments of Governor Greg Abbott. Whether you served during Vietnam or had a family member who did, this book honors that service. To receive the book, send your request to comm@tvc.texas.gov .

The book details heroic actions and sacrifices made in Vietnam, chronicles the events of the time, provides modern day reflections of veterans, and pays tribute to all who served in Vietnam.

Helping veterans starts here. The Texas Veterans Commission advocates for and provides superior service to veterans that will significantly improve the quality of life for all Texas veterans, their families, and survivors. The TVC assists veterans with receiving their benefits, provides funding to agencies which provide direct services to veterans and administers the Hazlewood Act education benefits. Learn more at www.tvc.texas.gov .