By Emily Hernandez, The Texas Tribune

“Air Force ordered to pay $230 million to Sutherland Springs shooting survivors and families of slain victims” was first published by The Texas Tribune, a nonprofit, nonpartisan media organization that informs Texans — and engages with them — about public policy, politics, government and statewide issues.

The U.S. Air Force was ordered to pay more than $230 million to survivors and families of those killed in the 2017 mass shooting at the First Baptist Church of Sutherland Springs, a federal judge ruled Monday evening.

Judge Xavier Rodriguez had previously found that the military branch was mostly at fault for the mass shooting because it did not report the gunman’s previous assault conviction to the FBI, which could have prevented him from purchasing the assault rifle he used to kill 26 people.

In the deadliest mass shooting in Texas history, Devin Patrick Kelley opened fire on more than 450 attendees at the church’s Nov. 5, 2017, Sunday service, injuring 22 and killing 26. He died later that day from a self-inflicted gunshot wound after two men chased him out of the church with firearms of their own.

Last July, a federal judge ruled that the U.S. government was “60% liable” for the church mass shooting because the Air Force didn’t report Kelley’s assault conviction. This should have logged his history of violence into the National Criminal Information Center database, which would have prevented him from buying the assault rifle from Academy Sports and Outdoors.

In November, the U.S. Department of Defense released a report that found the Air Force failed six times to report information that may have prevented Kelley from purchasing a firearm, according to the Associated Press.

The U.S. Department of Justice asked for $31.8 million to be distributed to the survivors and victims’ families during court arguments at the end of November, while the lawyers for those affected asked for $418 million, according to the Associated Press.

The 80 claimants in the lawsuit include relatives of those killed in the shooting and 21 survivors.

This article originally appeared in The Texas Tribune at https://www.texastribune.org/2022/02/07/sutherland-springs-shooting-air-force/. 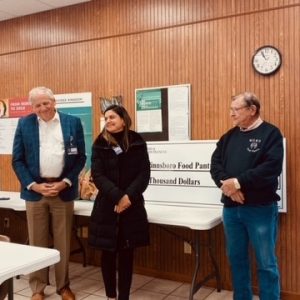