FORT WORTH, TEXAS, January 22, 2022 – Katie Cooley, a member of Union Hill FFA, caught a calf during the Fort Worth Stock Show & Rodeo’s Calf Scramble January 21, earning a $500 purchase certificate for a show heifer and the chance for up to $16,000 in scholarship awards. Cooley’s parents are Gay and Thomas Cooley of Gilmer. Cooley’s award was sponsored by San Jose Cattle Company – Island Division. 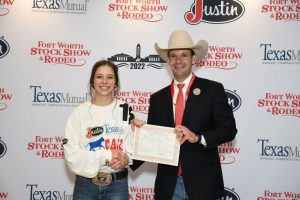 Katie Cooley won a $500 purchase certificate toward a beef or dairy heifer for a 4-H or FFA project for exhibition at next year’s Fort Worth Stock Show & Rodeo. The certificate, presented by Stock Show Calf Scramble Committee Chairman, Paxton Motheral, was sponsored by San Jose Cattle Company – Island Division.

One of the Stock Show’s most iconic and popular events, the Calf Scramble gives 20 students an opportunity to catch 10 calves during one of 23 performances of the legendary Fort Worth Stock Show & Rodeo held January 14 through February 5. Those not catching calves receive a pair of Justin Boots courtesy of the iconic western footwear maker. Justin Boots and Texas Mutual Insurance Company are overall underwriters for the legendary Calf Scramble Program.

Since the Fort Worth Calf Scramble began in 1987, the program has distributed almost $4 million to nearly 8,000 Texas students providing funds for the purchase of their beef or dairy heifer and more than $3.6 million in scholarships has been awarded to more than 1,600 students in recognition of their hard work and completion of the program. Katie Cooley will use the purchase certificate toward the cost of a heifer that she will raise and exhibit at next year’s Stock Show. Exhibitors that submit monthly reports and a final essay may be eligible for scholarship awards that can range between $500 and $16,000.

Preparations are underway so you can rise and shine at the 2022 Fort Worth Stock Show & Rodeo. With rodeo in the amazing Dickies Arena as well as livestock and horse shows, carnival midway, shopping, music and food at the Will Rogers Memorial Center – we have something for practically every taste at Fort Worth’s largest and oldest public event. It’s not too early to start making plans by visiting www.fwssr.com. Get ready for a legendary good time at the Fort Worth Stock Show & Rodeo – January 14 through February 5, 2022. This thing is legendary®.