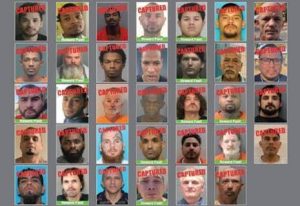 AUSTIN – The Texas Department of Public Safety (DPS) is pleased to announce that in 2021, it had the highest number of Most Wanted Offenders captured in a single year since the program’s inception in 1993. Last year DPS, in cooperation with state, federal, local and Mexican authorities,* captured a record 34 fugitives and sex offenders. This breaks the previous record of 32 captures that was set in 2013. Additionally, $71,500 in rewards was paid in anonymous tips that resulted in arrests.

The 34 people captured in 2021 includes 12 gang members and 17 convicted sex offenders. 14 people were captured within just two months, from Oct. 13 through Dec. 13.

“The public plays an integral role in the captures of these offenders, ensuring we have a successful Texas 10 Most Wanted Program and making our communities, and all of us, safer,” said DPS Director Steven McCraw. “I’m proud of this program and would like to thank all of our law enforcement partners who helped successfully bring these criminals to justice.”

DPS investigators work with local law enforcement agencies to select fugitives for the Texas 10 Most Wanted Fugitives and Sex Offenders lists who pose the most significant threat to public safety in the state. You can find the current lists — with photos — on the DPS website.

Texas Crime Stoppers, which is funded by the Governor’s Criminal Justice Division, offers rewards to any person who provides information that leads to the arrest of one of Texas’ 10 Most Wanted Fugitives or Sex Offenders.

For more information on the fugitives captured in 2021 as part of the Texas 10 Most Wanted program, visit the captured fugitive archive.