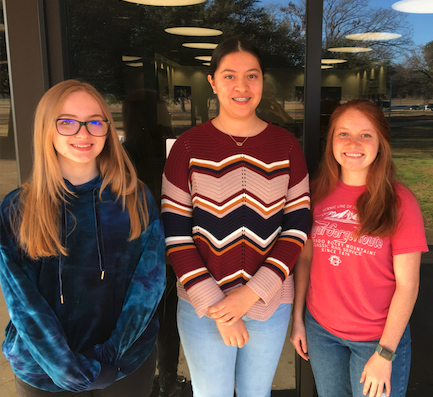 It has been said that “creative people try to do the unexpected.” During the past fall semester, three Honors Scholars in the NTCC honors program, Honors Northeast, emerged as fall showcases of achievement at NTCC, Alyssa Ochoa, Neida Perez, and Madellynn Smith.  All three exhibited a level of academic excellence equivalent to the top-tier of the NTCC honors program.  The Honors Committee of NTCC, therefore has recently promoted the three to Presidential Scholar.  With this, their institutional honors scholarship tripled, and their possibility of winning other amenities and awards greatly improved.

The Honors Program at NTCC is composed of two levels, Presidential Scholars, and Honors Scholars.  The ten scholars of the former group are now generally winning either a regional or national accolade during their two-year stay at NTCC.  In January of 2023, for example two NTCC Presidential Scholars, Skylar Fondren, and Jordan Chapin, are the regional student leaders of the Great Plains Honors Council, and the Texas Phi Theta Kappa. However, the Honors Scholar-group at NTCC, the second tier, is also composed of a very competitive group of rising scholars. This made the accomplishments of Ochoa, Perez, and Smith doubly significant.

In addition to assiduous coursework, all three wrote significant article-length essays. Ochoa completed a pathbreaking work on the history of the Texas dairy business. Perez wrote a pioneering work on the historical response of Texas to pathogens, and Smith re-engaged a former theme of NTCC scholarship—Professor Ollie Theisen’s work on artist, John Biggers, with a new point of view about the significance of his work.

Honors Director, Dr. Andrew Yox notes that it “was exciting watching the successes and surprising thresholds reached by Ochoa, Perez and Smith this past semester.  All three excelled not only in erudition, but in scholarship. They acquired an expertise that gives them something to talk about, and I believe we will be hearing more of what they have to say in the months ahead.”

Applications to enroll in the coming 2023-24 school year of Honors Northeast are now available online at www.ntcc.edu/honors One may also address questions or obtain a real application from  Dr. Andrew Yox at ayox@ntcc.edu. The due date for honors scholarships is 1 March 2023.