The 12-5 Dallas Cowboys traveled to Tampa Bay to take on the 8-9 Tampa Bay Buccaneers Monday night in the sixth and final Super Wild Card Weekend game.  The winner advanced to take on the San Francisco 49ers on Sunday, January 22nd while the loser was done for the year. 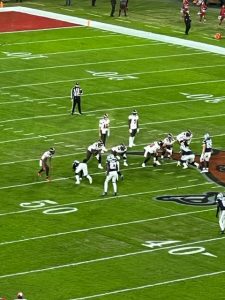 Tampa Bay won the opening coin toss and elected to defer to the second half.  Following a touchback Dallas began their first drive at their 25 and it was a quick three-and-out.  After a Bryan Anger punt the Bucs set up for their first possession at their 35.

The Dallas defense rose to the challenge and forced a three-and-out of their own and Jake Camerada’s punt was taken by KaVontae Turpin at his 22 and he returned the ball up to the 29 where Prescott and company set up shop for their second possession.

For the second time in as many attempts, Dallas went three-and-out once again and Anger punted from his 24.  The punt went down to the 34 and was returned to the 40 and Tom Brady brought his unit out once again.

The Dallas defense shut the Bucs offense down once again and following a touchback of the fourth down punt Dallas went on the offensive for the third time from their 20.

Prescott and the offense finally got things going offensively and was aided by a 15-yard roughing the passer.  The drive ended when Prescott hit tight end Dalton Schultz on a 22-yard TD pass with 6:28 left in the first quarter.  Sadly, Brett Maher’s PAT kick sailed wide left, but Dallas had a 6-0 lead.

Maher’s ensuing kick went out of the end zone and Tom Brady and company set up on their 25 for their third possession.

Brady got his offense moving methodically down the field on the possession.  Brady simply wore out the Dallas defense and when the first quarter ended the Bucs were on the Dallas 5.  Two plays later Jayron Kearse intercepted Brady in the end zone and the ‘Boys thwarted the Bucs and took over on the 20.

Prescott and the offense picked up right where they left off at the end of the scoring drive.  The found the end zone once again when Prescott ran in around the left side untouched from the 1 with 6:13 left in the first half, pushing the lead to 12-0.  Maher’s extra point attempt was wide left this time, leaving him 0 for 2 on extra points.  The drive was 18 plays, 80 yards and took 8:38. 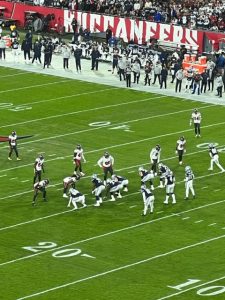 They did just that, as Prescott hit Schultz on a 11-yard TD pass with 27 seconds left in the half, pushing the lead to 18-0.  Maher missed the extra point wide left for the third consecutive time, leaving everyone scratching their heads.  The drive was 11 plays and 95 yards and took 3:05 off the clock.

Maher kicked off one more time in the first half, and has was the case every other time, the ball went out of the end zone and the Bucs began at their 25.  The Dallas defense held and the Cowboys went into the locker room leading 18-0 and feeling good about everything except for Maher.

Maher kicked off to the Bucs to begin the second half.  The ball was taken at the 3 and returned to the 27.  The Dallas defense forced yet another three-and-out and Turpin watched the punt go out of bounds at the Dallas 14 and the Cowboys went back on offense once again.

Prescott moved the offense the 86 yards into the end zone again, scoring with a 2-yard TD pass to Michael Gallup with 10:04 left in the game.  The drive was 8 plays took 4:07 off the clock.  Maher missed the extra point attempt once again, but Dallas led 24-0.

Brady and company began their next drive at the 19 after a short return.  After picking up one first down, Dallas forced a punt on the second series and Turpin was tackled at the Dallas 22 and Prescott and the offense it the field yet again.

They could not get a sustained drive going and Anger punted the ball away for only the second time on the night.  The kick was downed on the Bucs 5 and Brady hit the field again with 3:09 left in the third period knowing his team HAD to get a score on the possession if they had ANY hope of getting back into the game.

The Tom Brady that fans have seen through the years finally showed up on the possession and he drove his team 95 yards in 10 plays over 3:09.  The score game on a 30-yard pass to Julio Jones on the last play of the third quarter. The try for a 2-point conversion was no good when Brady’s pass fell incomplete, but Tampa Bay had a glimmer of hope, trailing 24-6.

Turpin took Camarada’s kickoff at the goal line and returned the ball up to the 34 and Prescott brought the offense on the field to try to get points again. 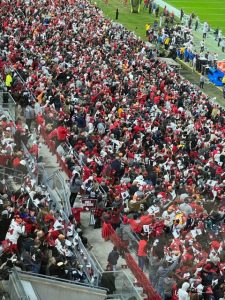 The Bucs began their next drive at their 15.  Brady drove his charges down to the Dallas 2 and on third down he was sacked back at the 12.  Brady threw incomplete and Dallas took over on downs at the 12 with 6:20 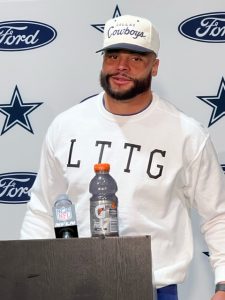 remaining in the game.

Dallas had a quick three-and-out and Anger punted away with 4:53 left in the game.  The kick went to the 40 and was returned to the Bucs 48 and Brady hit the field again with 4:43 left in the contest.

The Bucs found the end zone for the second time when Brady hit Cameron Brate on an 8-yard TD pass with 2:04 left in the game.  A 2-point conversion pass to Mike Evans was good and the Buccaneers cut the deficit to 31-14.  The drive was 11 plays, 52 yards and took 2:39.

As expected, Tampa Bay kicked off onside and they recovered the ball at midfield at the two minute warning.

Brady moved his team down to the Dallas 35 but a fourth down pass fell incomplete and Dallas took over with 1:08 left in the game.  Prescott took a knee two time and the game ended with Dallas securing the 31-14 victory.

When Coach Mike McCarthy faced the media after the big win he focused on the both the offense and the defense.

“To a man, everybody had confidence in what we needed to do tonight and I thought the offense and defense played at a very high level.  The key was just really staying true to the game plan.  We wanted to be balanced on offense and we accomplished 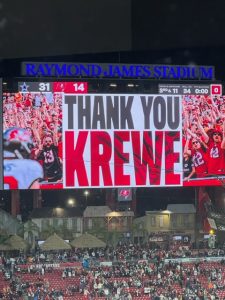 that.  Once we settled in I felt that we did what we needed to do.  They challenged us in the box and we were still committed to the run game, and defensively, I just thought that we were all over them.  Our defense set the tempo for the game and had a couple of three-and-outs to start the game and just did a great job.”

When quarterback Dak Prescott came in for his postgame press conference he was asked if he knew coming in that he was about to have the type of game he had. 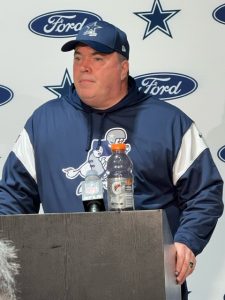 He was asked if his poor play a week earlier in Washington motivated him for the game against Tampa Bay.

“In a sense, yeah; I got away from the way I play this game and got greedy.  I tried to just force some throws and tried to take the big ones and that’s not who I’ve been throughout my career.  I think it was uncharacteristic, so yeah, I’m sure it was a way for me to just dial back in.  I wiped that clean; I knew what this game meant.”

The team hopes and plans to keep rolling when they face San Francisco in Santa Clara, CA next Sunday night, January 22nd at 5:30 PM Central Time in the Regional Playoff.  The winner of that game will face the winner of the New York Giants at the Philadelphia Eagles in the NFC Championship Game a week later.  That game will be played at 7:15 PM on Saturday night, January 21st.

Dallas will go into the game with two days less to prepare than San Fran, but the Cowboys are confident they will be ready for the challenge and want to pay the Niners back for defeating them in Dallas in the first round of the playoffs last year.  Hopefully, they will be able to accomplish that goal!

Congratulations to Jake Shannon and Boston Seahorn of the Harmony Eagles

Congratulations to our Lady Buckeyes