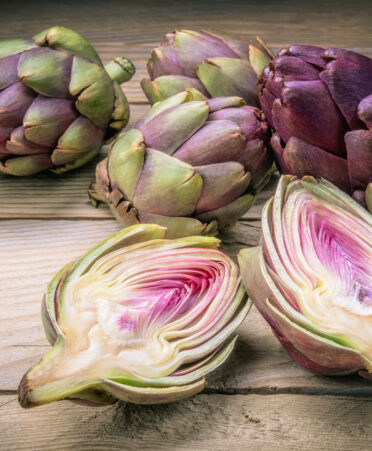 (WACO) – Artichokes and asparagus are not as scary as they look.

Students start working with the vegetables in the program’s second-semester Food Preparation II class. They learn that artichokes are part of the thistle family and asparagus is in the lily family.

In Texas, asparagus is in season in March and April, with artichokes coming into season in April and May, according to the Texas A&M AgriLife Extension Service.

Artichoke seeds can be planted at a time in late summer when the temperature will not rise above 85 degrees Fahrenheit in Central, North and West Texas, according to the extension service. Ray said artichokes can be killed if the temperature falls below 20 degrees.

“They can grow pretty quickly,” he said. “They take a while to mature.”

Kate Whitney, a horticulture extension agent for the Williamson County Texas A&M AgriLife Extension Service in Georgetown, said research centers in Uvalde and Weslaco are having some success growing artichokes in the heat of South Texas.

To cook artichokes, cut about three-quarters of an inch off the tip and trim the points off the leaves.

“When you peel a couple of the toughest leaves off, you can turn the artichokes upside down and boil them until the leaves fall off easily,” Ray said.

Asparagus crowns that are up to two years old can be bought at garden centers, nurseries and through seed catalogs and planted in January or February, according to the extension service.

“It does well with temperature and weather,” Whitney said of asparagus. “The one challenge we have is that it likes well-drained, sandy soil. That is not what we have in Williamson County. It can be done, but you have to do some preparation work in the planting bed. You have to work in compost, organic matter and mulching and try to do what you can to improve drainage.”

The states growing the most asparagus are California, Michigan, New Jersey, and Wisconsin. Asparagus is also imported from Chile, Mexico and Peru, according to the Agricultural Marketing Resource Center.

“Asparagus is probably one of the easier vegetables to cook,” Ray said. “You can rub it with oil and put some salt and pepper on it and grill or steam it.”

Ray said an asparagus can be bent and where it naturally breaks can mark the cutting spot. The longer asparagus is cut, the tougher it becomes.

Asparagus is high in iron, fiber, and vitamins A and C, according to the Agricultural Marketing Resource Center.

January is National Artichoke and Asparagus Month, which brings attention to the vegetables so that more people can cook and eat them.

For more information on TSTC, go to tstc.edu.