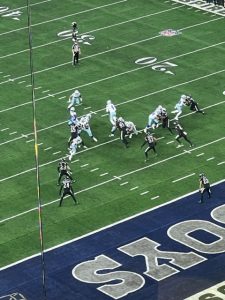 December 18 to the Jacksonville Jaguars on the road after blowing a 17-pont lead.  The loss dropped the Cowboys to 10-4 on the season while the Eagles came into the game with the NFL’s best record, 13-1.  The game also was made a little less of a big game due to the absence of starting quarterback Jalen Hurts who was sidelined after suffering a shoulder injury six days earlier.  Gardner Minshew started at quarterback in place of Hurts. 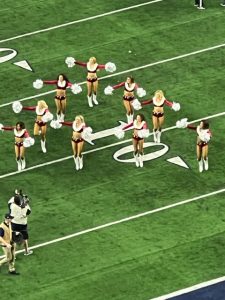 Dallas won the coin toss to begin the game and deferred to the second half.

Bret Maher’s kick went out of the end zone and the Eagles began from their 25 for their first offensive possession.

Minshew connected on a 48-yard pass to AJ Brown on the drive, putting the ball on the Dallas 11.  The Cowboy defense stiffened and on a 4th and 6 from the 7, Jake Elliott came in to attempt a 25-yard field goal.  The kick was good with 11:16 left in the opening frame and Philly took an early 3-0 lead.  The drive was 7 plays, 68 yards and took 3:44.

Elliott’s ensuing kick went out of the end zone and Dallas went on offense the first time from their 25.

The Cowboys managed one first down before Dak Prescott threw a 42-yard pick-6 to Josh Sweat with 9:18 left in the opening quarter.  Following Elliott’s PAT the Philly 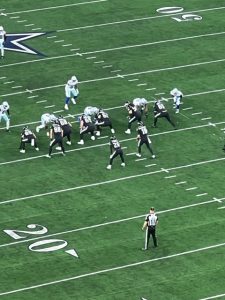 Elliott’s kick went out of the end zone and Dallas began their second drive at their 25.

Prescott looked totally in control on the drive and moved the offense the 75 yards into the end zone for the first Cowboys score of the day with 1:52 left in the first quarter.  Maher added the PAT and Dallas closed the gap to 10-7.  The drive was 14 plays and took a whopping 7:26 off the clock.

Maher booted his next kickoff out of the end zone and the Eagles began at their 25 once again.

Philly was moving until Jayron Kearse intercepted a Minshew pass at his 48 and returned the pick to the Eagles 47 and Dallas was in business again. 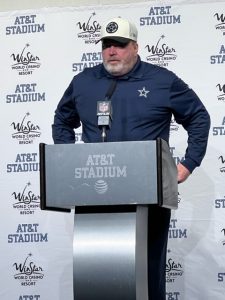 Thanks to a flea-flicker gone wrong, Prescott was dropped for a 10-yard loss on first down.  Mike McCarthy opted to go for a 4th and 8 on the possession.  A Prescott pass was incomplete but the Eagles were called for defensive holding, giving the ‘Boys new life.

They took advantage and scored their second TD of the game with 11:34 left in the first half when Prescott connected on a 36-yard TD pass to CeeDee Lamb.  The drive was 6 plays and it took 3:18 to cover the 47 yards for the score.  Maher added the extra point and Dallas led for the first time in the game, 14-10.

Maher’s next kickoff was returned to the 26 and Minshew and company went on the offensive once again. 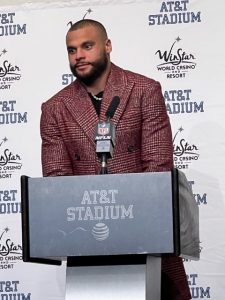 On the first play of the possession Minshew hit Dallas Goedert for a 20-yard gain.  He followed that up with an 18-yard completion and the Eagles were in great position at the Dallas 30.  The Dallas defense had no answer and Philly got into the end zone on offense for the first time in the game with when Minshew ran in from 1 yard out with 7:08 left in the first half.  Elliott added the point after and Philly regained the lead, 17-14.  The drive was 10 plays, 72 yards and took 4:26 off the second quarter clock.

The Eagles began on their 25 on their next drive after a touchback of Maher’s kickoff.

Minshew drove his charges down the field, but the Dallas defense rose to the occasion, forcing an Elliott 47-yard field goal.  The try was good with 6 seconds left in the half and the Eagles jumped ahead once again, 20-17 and led by that score at the half.  The drive was 10 plays, 72 yards and took 1:43.

Dallas received the second half kickoff and despite a great return, a holding call pushed the offense back deep into their end of the field, resulting in a three-and-out.  After a Bryan Anger punt the Eagles set up for their next drive at their 23.

Minshew chewed up yards against the soft Cowboys defense and drove the 77 yards for their third TD of the game.  The score came on a 14-yard Minshew pass to DeVonta Smith.  The drive was 11 plays and burned 4:37 off the clock.  Elliott added the PAT and the Eagle lead moved to 27-17.

Dallas came back on their next possession with a 10-play, 49-yard drive that consumed 3:59 off the clock.  The drive ended with a Maher 45-yad field goal with 5:01 left in the third quarter and cut the Eagles lead to 27-20.

On the ensuing Philadelphia possession, Kearse got his second turnover of the game, recovering a fumble and returning the ball down to the Eagle 31.

Prescott led the offense into the end zone, tossing a 12-yard TD pass to Michael Gallup with 2:12 left in the third quarter.  Maher split the uprights on the extra point try and the game was tied 27-27.  The drive was 5 plays, 31 yards and took 1:59.

The visitors came right back down the field on their next possession and Minshew connected with Smith once again, this time on a 9-yard TD pass with 9:59 left in the game.  Elliott nailed the extra point and the Eagles took the lead once again 34-27.  The drive was 13 plays, 75 yards and took 7:13 off the clock.

Dallas faced a 3rd and 29 on their next possession when Prescott hit new acquisition and former Indianapolis Colt T. Y. Hilton down to the Eagles 19.  The drive culminated when Prescott hit Lamb on a 7-yard TD strike with 5:49 left in the contest.  Maher hit the extra point and the game was tied at 34-34.  The drive was 8 plays, 75 yards and took 4:10 off the 4th quarter clock.

DaRon Bland intercepted Minshew on the ensuing Eagles possession at the Dallas 40, give the Cowboys a chance to chew up the clock and secure the win in the final home game of the season.

On their next possession, there was a fumble by Miles Sanders and Anthony Barr recovered for Dallas on the Eagles 21 with 2:07 left in the game.

After yet another touchback of a Maher kickoff, Minshew and company got the ball back at their 25 needing a TD and an extra point to win the game with one time out left.

Minshew quickly led the Philly offense down the field, but a 4th down pass at the Dallas 20 into the end zone fell incomplete and Dallas took over with 14 seconds left in the game.  Prescott took a knew and the Cowboys escaped with the 40-34 win, moving to 11-4 on the year.  The loss dropped Philadelphia to 13-2 on the season.

A very happy Coach Mike McCarthy faced the Dallas media after the game and talked about how Prescott responded after throwing the early pick-6.

“I don’t know if he could respond any better.  I think his performance, going 15 completions in a row, just played at a huge level tonight.  They crashed the run game.  Their run defense was really good, but the most important thing, I thought Kellen (Moore) did a really good job staying the course getting the running attempts and making sure Tony (Pollard) and Zeke (Elliott) were touching the football.  Obviously, we got it done through the passing game today.”

Prescott was asked about the pick-6 when he held his postgame presser and responded, “Yeah, I was chasing him (Sweat) down and I was going ‘is this really happening?’  I’ve just got to go look at it.  Long guy, big and obviously tall arms and I guess I just misjudged his length.  He made a great catch and I don’t know if he’s had an easier interception and return than that one.  I just thought ‘let me get back on the field and get this thing rolling.’”

Dallas will have a short week as they travel to Nashville on Thursday night to take on the Tennessee Titans on Thursday Night Football on Amazon Prime.