The Houston Texans, coming off possibly their best game of the year despite a loss to the Dallas Cowboys a week earlier, faced another almost impossible to defeat team, the Kansas City Chiefs, at NRG Stadium in Houston Sunday.  The Texans came in at 1-11-1 on the year 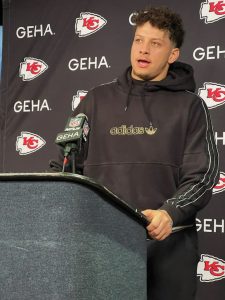 while the surging Chiefs entered the game at 10-3 on the season. 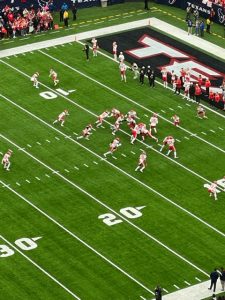 Kansas City won the coin toss and elected to defer to begin the game.  Harrison Butker kicked the ball out of the end zone and Houston began their first drive at their 25 yard line.

Jeff Driskel began at quarterback for the Texans on the drive.  After picking up one first down, Houston was forced to punt away on the next series.  Cameron Johnston punted away from his 36 to the KC 19 and Patrick Mahomes and the Chiefs offense came on the field for the first time.

The Chiefs moved the ball to the KC 48 before Tommy Townsend punted away to Desmond King, II.  After a short 3-yard return, Houston set up on their 15.

The Chiefs defense was swarming on the possession and Houston had a quick three-and-out.  Johnston punted from his 15 to the KC 38 where Kadarius Toney returned the ball up to the 40.

The Houston defense rose to the occasion, dropping Mahomes for an 11-yard loss on second down and ultimately leading to a three-and-out.  Following a punt Houston went back on offense at their 20.

Davis Mills and Driskel alternated behind center and led the offense down the field and the drive culminated when Mills hit Teagan Quitoriano on an 8-yard TD pass with 1:01 left in the first quarter.  The drive was 11 plays, 80 yards and took 5:42.  Ka’imi Fairbairn added the PAT and Houston led 7-0.

Unfazed by the Houston score, Mahomes led the Chiefs on a 75-yard scoring drive that ended with a 20-yard TD pass to Jerick McKinnon with 12:27 left in the first half.  Butker added the extra point and the game was tied 7-7.

The Texans managed one first down on their next possession before being forced to punt away, but on the third play of their ensuing possession, Isiah Pacheco fumble the ball and Houston recovered and went back on offense at the Chiefs 17.

After throwing incomplete on first down Mills ran 17 yards into the end zone for a TD with 9:19 left in the half.  The drive was just 2 plays and took only 9 seconds off the second quarter clock.  Fairbairn added the point after and Houston reclaimed the lead, 14-7. 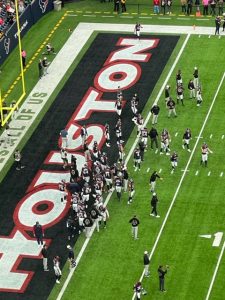 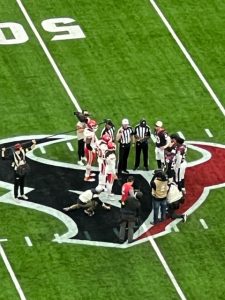 There was no further scoring until Mahomes led his offense down the field with the 2-minute offense.  The score came on a 4-yard TD pass from Mahomes to Marquez Valdes-Scantling with 14 seconds left in the half.  Butker missed the extra point but KC closed the gap to 14-13.

After a touchback on the kickoff the Texans took a knee and the half ended with Houston on top 14-13.

KC received the opening kickoff and began their first drive of the second half at their 25 and Mahomes drove the offense down to the Houston 9 before the Chiefs were forced to call on Butker for a 27-yard field goal attempt.  The kick was good and with 9:05 left in the third quarter the Chiefs had their first lead of the day, 16-14.  The drive was 11plays, 67 yards and took 5:55 off the third quarter clock.

The Texans got a break on a challenge after recovering a fumble by KC and began a drive toward the goal line.  The possession ended when Mills hit Jordan Akins on a 13-yard TD pass with 1:25 left in the third quarter.  Fairbairn added the extra point and Houston went back in the lead 21-16.  The drive was 7 plays, 49 yards and took 4:18.

The Chiefs came right back and took the lead once again on their next possession when Mahomes ran into the end zone from 5 yards out with 11:57 left in the game.  A try for a 2-point conversion was good on a pass from Mahomes to McKinnon, putting KC up 24-21.  The drive was 11 plays, 84 yards and took 4:28.

Houston marched right back down the field on their next possession but the drive stalled at the KC 10, bringing Fairbairn out for a 29-yard field goal attempt.  The kick was good and the score was tied at 24-24 with 5:11 left in thegame.  The drive was 17 plays, 51 yards and took 6:46.

Mahomes led the Chiefs down the field on their next possession, but the Houston defense stiffened and forced a 51-yard Butker field goal with 12 seconds left in regulation.  Butker missed a PAT earlier in the game and the kick for the win was wide right and Houston took over at their 41 with 8 seconds left in the game.  Mills took a knee and the teams prepared for OT tied at 24-24.

The Chiefs won the coin toss and elected to receive to begin the overtime period.  Fairbairn kicked the ball down to the 3 where it was returned to the 23, but a 10-yard penalty for holding moved the ball back to the KC 9.

The Texans defense rose to the occasion and forced a punt after sacking Mahomes on third down and following a Townsend kick, King fair caught the ball at the Houston 13 and the offense hit the field knowing they would win the game with a field goal. 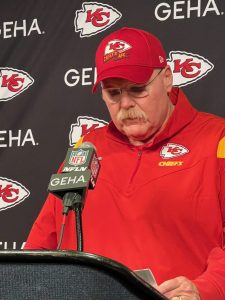 Things didn’t work out like they had hoped, as the Texans fumbled the ball and KC recovered on the Houston 26.

It didn’t take but 1 play for the Chiefs to claim the victory.  McKinnon took the ball around left end and ran untouched 22 yards into the end zone for the winning TD with 5:13 left in the overtime period, and Kans

as City got the 30-24 win moving their season record to 11-3.  The loss dropped Houston to 1-12-1 with three games remaining in the season.  The Texans will travel to Nashville this weekend to

take on the Tennessee Titans Saturday in a Christmas Eve game. 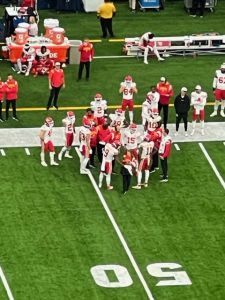 Texans Coach Lovie Smith summed up the game in his opening statement when he faced the media after another close loss.

“That team out there today has won one game, but they’re not playing like that. They’re showing up every day, taking coaching, trying to get better. They’re coming to the games and giving ourselves a chance to win it at the end. We still haven’t finished a game the way we need to get a win, but we’re building. Offensively, when it comes down right up until the end, and you have over 20 points on the board, there are some things that we’ve done well. Throwing the football, our two-quarterback system did some good things. I thought Davis (Mills) did some good things throwing it. Our play when Dameon (Pierce) went down, as you saw was to move Royce Freeman up. He is a good football player, been on our practice squad and can do some things. I thought he ran the ball well throughout. This week, we knew who we were playing. Chris Jones, I think is as good a defensive player as there is in the league, so we thought that moving Tytus (Howard) to the guard position would help us in a lot of different ways. I thought that gave us a chance. Defensively, whenever you can take the ball away, it was going to be one of those kind of games. Patrick Mahomes is as good as there is. (Travis) Kelce, Hall of Fame tight end. They have outstanding skill throughout, so we knew it would be tough duty. I thought the guys fought, hung in there. The takeaways always give you a chance, and special teams too. We fought hard. I understand it’s still a loss. We’re going to keep showing up is what we’re going to do. Next, it will be on to Tennessee on a short week.”

Chiefs Coach Andy Reid was obviously in a much better frame of mind when he faced the media following the game, as the Chiefs clinched their seventh straight 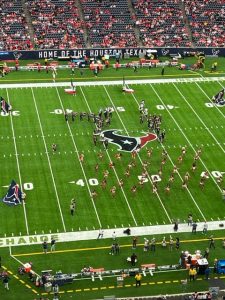 AFC South title with the victory. 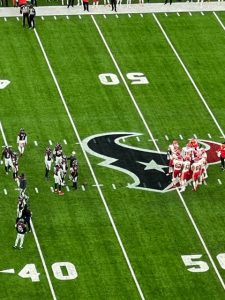 “No injuries to talk about. Listen, our fans were unbelievable today. I think we had more fans than maybe what the Texans had. It was great to see all that red, and I think that helped us with the support down in that overtime. It was a weird game. My hat goes off to Lovie (Smith) for the great job he’s done here. I mean, you’ve seen it the last two weeks. It’s a hard job, and it takes time as a head coach. Lovie, my word of advice is just give him time. He’s a tremendous football coach. I’ve had a chance to compete against him for a number of years and just rock-solid football teams. The thing I was proudest about our guys was they kept playing. They didn’t let anything hinder them, whether it was calls, whether it was fumbles, whatever. They kept playing. Defensively that was a real strength.  And then Frank (Clark) at the end, that relentless pursuit making the play like he did. Willie (Gay) getting under the pile there and making sure we got that football in hand. Then offensively between Pat (Mahomes) and (Travis) Kelce and (Isiah) Pacheco and (Jerick) McKinnon, they had a great day. Quez’s (Valdes-Scantling) catch before the half, I thought was phenomenal.  Just all around a good fight. We’ve got to do better in the penalty area, turnover area. We’ve got to make sure we fix this. We’ll get back on that. The important thing is we won the game, and they’re tough to get in this league. We’re going to enjoy this one on the way home, and then we’ll get ready for a good Seattle team coming in on Christmas Eve.”