A series of tornadoes that struck Northeast Texas in early November damaged timber on more than 10,000 acres. The timber was worth an estimated $13 million. 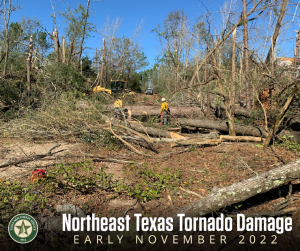 Storms that tracked across North Texas on Nov. 4 resulted in seven tornadoes, five of which impacted timberland in Bowie, Cass, Henderson, Morris and Red River counties, according to a Texas A&M Forest Service assessment of the damage. One person died as a result of the storm in Morris County.

The damage assessment used forest inventory data collected by Texas A&M Forest Service foresters and technicians as part of the Forest Inventory and Analysis (FIA) program. The data, including forest health, tree numbers, size and condition, was used along with satellite imagery from before and after the storms to estimate damage to timber. The FIA data is updated on an annual basis.

Damaged trees were uprooted, snapped off below the crown or leaning significantly. Most of the damage to timber was on private property.

In Bowie County, an EF-2 tornado with peak winds around 125 mph stretched for 15.7 miles and was 1,200 yards across at its widest point. The tornado damaged 2,279 acres of timber — 624 acres of pine forest, 1,327 acres of hardwood forest and 328 acres of mixed pine-hardwood forest. The total value of damaged timber in the county is estimated at $2.7 million.

In Cass County, an EF-1 tornado with peak wind speeds of 110 mph damaged 3,250 acres of timber along its path of more than 20 miles. The damage included nearly 1,626 acres of pine forest, 1,149 acres of hardwood forest and 476 acres of mixed forest. The total value of damaged timber in the county is estimated at $4.1 million.

Damage in Henderson County was linked to an EF-2 tornado with estimated peak winds of 115 mph. That tornado tracked more than 16 miles and damaged 194 acres of predominantly hardwood forest with an estimated value of $235,120.

In Red River County, an EF-3 tornado with estimated top winds of 150 mph cut a half-mile path at its widest point and had a 58-mile track of damage, stretching into Oklahoma. The tornado damaged 3,606 acres of timber — 816 acres of pine forest, 2,217 acres of hardwood forest and 573 acres of mixed forest — worth an estimated $3.9 million.

Stottlemyer said similar damage assessments, using a combination of satellite imagery and on-the-ground observations along with Forest Inventory and Analysis data, can be used to determine the toll of hurricanes, wildfires and other major events on trees across the state.

“We’ve developed protocols for rapidly assessing timber damage following major disasters that have become a model for similar efforts across the South,” Stottlemyer said. “Our agency performs this work as a service to the people of Texas.”