Tyler (November 29, 2022) — Ollie Flores always had a calling for helping others, knowing he wanted to work in healthcare from a young age. But after a challenging few years working as a traveling nurse during the height of the COVID-19 pandemic, 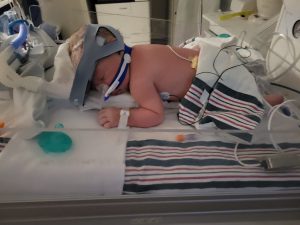 he was facing burnout and had started to think about leaving the profession altogether.

But then his son, Teddy, was born requiring immediate care in the UT Health Tyler neonatal intensive care unit. Witnessing the NICU team’s skilled, compassionate care for his son and their enduring teamwork reignited his passion for the profession, leading him to not only stay in a nursing career but join the UT Health Tyler NICU team.

Prior to that, the majority of Flores’ work had been in critical care. He met his wife, JoEllen “Jo” Flores, while he was in nursing school and working in the emergency room and she was working as a bedside nurse in the cardiovascular ICU. After Flores’ critical care residency at Parkland Memorial Hospital in Dallas, they decided to pursue travel nursing in 2018 to help save money for their wedding and a house. They eventually returned to Texas and had settled in Bullard when the COVID-19 pandemic hit, and Flores returned to the traveling circuit. 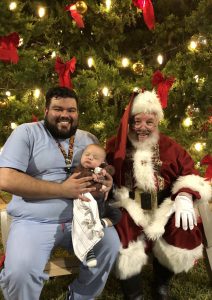 “These were the sickest patients I had ever worked with, but my mind thrived because I thrive in that critical care setting,” Flores said. “I was opening up a part of my brain, and I was happy to be involved in interdisciplinary, team-oriented healthcare.”

Eventually, his travels brought him back to the Tyler area when COVID-19 was surging last summer. The stress of the past few years had begun to take its toll when he and Jo, who had faced struggles conceiving, learned she was pregnant in December. Flores was on the verge of looking for another profession when Jo gave birth via C-section on Aug. 18.

“I wasn’t sure what was supposed to happen, but when they pulled Teddy out, you could hear a pin drop in the operating room. I go to look at him, and he was purple,” Flores said. “He wasn’t turning pink, he was not a healthy baby. He sounded very junky in his lungs.”

Flores realized just how precarious things were when he was told they were calling a neonatologist, and Teddy was whisked away to the NICU, where he was placed on his stomach and hooked to a CPAP (continuous positive airway pressure) machine to help him breathe.

“All I did for the last year and a half was prone my patients, so watching him proned on the CPAP was really difficult,” Flores said.

Teddy continued to struggle to keep his oxygen levels up, so the care team began discussing with the Floreses the possibility of intubation. 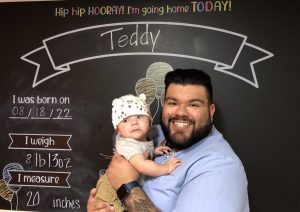 “We didn’t know what to expect. When you intubate, there’s always the fear that you’ll never come off of it and I had just gone through this with COVID.  I intubated a lot more than I brought off, and I can still remember all of their names,” Flores said. “We prayed. We were really defeated at that point, but then we walk back into the NICU, and we see night nurse Laura Ryan holding him and feeding him with no oxygen. He had turned a corner.”

Flores’ interaction with the NICU team sparked in him something the grueling years of COVID had almost extinguished — the curiosity and passion that drove him into nursing in the first place.

“At this point, the care that we were receiving was so tailored to our needs, and everyone was so personable,” he said. “I had never really worked in a unit where nurses were able to spend that quality time with their patients. They had rounds with all of us together, which was nice to see because in critical care setting you don’t always have the ability for nurses round with patients and their families.”

One day during rounds, he met Jordan January, clinical manager for the NICU, which opened earlier this year.

“I said, ‘This would be a good situation. You took care of my son so why can’t I do that for someone else,’” he said. She encouraged him to apply for the job, and he started in the NICU in mid-September.

Flores said what he enjoys the most about his new role is the ability to help other NICU parents who are feeling as vulnerable as he did when Teddy was born.

“What I love the most is being there for the first-time dads because I’m able to put them at ease for what they’re going through. I tell them, ‘I was in your exact spot. My kid was in Bed 1. I have been where you have been,’” Flores said. “I constantly tell them, ‘I’ve been there. It’s going to be OK, and we’re going to do everything in our power to make sure you guys graduate from the NICU.’”

Teddy graduated the NICU with flying colors, and on Nov. 29, two days before he turned 15 weeks old, helped flip the switch on the UT Health Tyler Christmas tree, an honor given to a former patient each year.