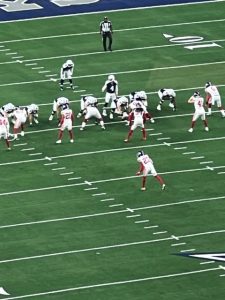 The 7-3 Dallas Cowboys hosted their NFC East rival the 7-3 New York Giants in the Cowboys traditional Thanksgiving Day home game Thursday.  With the Cowboys blowing past the Minnesota Vikings in Minneapolis four days earlier while the Giants were losing at home to Detroit, Dallas came in ahead of the New York by virtue of the their victory in the Meadowlands earlier in the season.  The winner of the game would be in great position, at 8-3, two games behind the 9-1 Philadelphia Eagles going into Sunday, while the loser would drop to 7-4, three games out with five games remaining in the regular season.  Dallas came into the game as a 10-point favorite.  Although they didn’t play a very consistent first half they exploded for 21 consecutive points in the second half before the Giants added a TD in garbage time.  The Pokes now have 10 days off before their next game.  They will host the Indianapolis Colts on December 4th.

Dallas won the coin toss and elected to defer to the second half to begin the game.  Brett Maher kicked the ball out of the end zone and following a touchback the Giants set up on offense at their 25.

Daniel Jones hit at 20-yard pass on the first play from scrimmage and the Giants were off to a fast start.  The drive stalled at the Cowboy 48 and Jamie Gillan punted the ball away.  The kick barely went into the end zone and Dallas began their first offensive possession at their 20.

CeeDee Lamb gained 12 yards on a reverse on the first play of the possession, as Dallas set up.  Mike McCarthy gambled on a 4th and 1 on the possession and the Giants stopped the play for no gain and New York took over on the Dallas 40.

NY got a 23-yard pass on the first play after taking over.  On the second play Jones hit Isaiah Hodgins on a 24-yard scoring strike but the Giants were called for an ineligible man downfield, negating the TD.  Things went downhill from there, and Graham Gano nailed a 57-yard field goal with 9:44 left in the first quarter and the visitors led 3-0.  The drive was 5 plays, 1 yard and took 1:51.

Dallas began their next drive at their 25 following a touchback.  After moving down to the Giants 43, Dak Prescott was intercepted by Rodarius Williams at the Giant 25 and he returned the pick to the 31 and Jones and his unit hit the field again.  The Dallas defense got the job done and it was a quick three-and-out.

Following another Gillian punt and a holding call on Dallas during the kick, Prescott had to bring his teammates out at his 7 to start the next possession.

Prescott led the offense on an impressive 11-play, 93-yard drive that took 6:03 off the clock.  The drive culminated when Ezekiel Elliott ran for a 6-yard TD with 14:55 left in the first half.  Maher added the PAT and Dallas led 7-3.

The Giants took over at their 25 and moved down to the Dallas 1 after a 44-yard connection from Jones to Darius Slayton.  Two plays later Saquon Barkley ran into the end one from 2 yards out with 9:28 left in the first half.  Gano added the extra point and New York led 10-7.

The ‘Boys moved down to the Giant 31 but a pass intended for Lamb was mishandled and went off his hands into the waiting arms of Julian Love and the pick was returned to the Giant 27 with 1:50 left in the half.

Jones led his unit down to the Dallas 27 and clocked the ball with 3 seconds left, setting up a Gano 47-yard field goal attempt on the last play of the half.  The kick was good, and the half ended with the Giants leading 13-7.

Dallas received the second half kickoff and Gano’s kick sailed into the end zone and Prescott brought his offense back on the field for their first possession of the second half at the Cowboys 25.

Prescott moved the team down the field the 75 yards into the end zone for a touchdown in 14 plays over 7:39.  The score came on a 15-yard pass from Prescott to Dalton Schultz with 7:21 left in the third frame.  Maher split the uprights and Dallas re-took the lead, 14-13.

The Giants moved the ball up to their 44 and the Dallas defense held on a 4th and 1 and Prescott and company went back to work with 4:07 left in the third frame.

It took the offense just 2:05 and 6 plays to move the ball the 44 yards into the end zone for the third TD of the day for Dallas.  The score came on a 6-yard TD pass from Prescott to Schultz with 2:02 left in the third quarter.  Maher was successful on the extra point try and the Cowboys led 21-13.

The G-men began their next drive at their 25 after another touchback, and after moving the ball to midfield, they were shut down by the Cowboys defense and had to punt the ball away with 14:44 remaining in the game.  Dallas took over at their 20 after a touchback on the punt.

The offense clicked on all cylinders on the drive and the team moved the 80 yards into the end zone in 10 plays and took 5:51 off the fourth quarter clock.  The score came on a 2-yard TD run by Peyton Hendershot with 8:53 left in the game.  Maher nailed the extra point and the Dallas lead increased to 28-13.

New York moved from their 25 after a touchback on the ensuing Maher kickoff to the Dallas 38 and the ‘Boys defense held on a 4th and 9 and Prescott and company took over at that spot with 3:12 left in the game.

They moved the ball down to the Giants 28 but the drive ended when Maher missed a 36-yard field goal with 1:13 left in the game, turning the ball over the New York at their 36.

Jones drove the Giants the 64 yards into the end zone for a TD when he hit Richie James on a 1-yard TD pass with 8 seconds left in the game.  The extra point kick was good, but Dallas still led 28-20 and secured the win.  The 64-yard drive took 1:05 and 7 plays.

“We played our best game of the year four days ago. (Against Minnesota with a 40-3 victory on the road.)  Getting ready for this game was a challenge.  New York had a dozen or so guys that were left home and we half a dozen or so guys that were fighting through an illness, so it was important for us to get healthy over the weekend, really all the way up to Wednesday.  We’ll get some Zoom calls next week because its flu and cold season and we were hit pretty good the last couple of days.  I’m proud of the team for getting it done today, division game.  There was a lot of back and forth, and I don’t want to get into it, but to win a game when you have 2 to 1 penalties to your opponent that’s obviously not where you want to be.  I think it speaks to our capability as a team.”

When quarterback Dak Prescott came in for his postgame presser he was asked about the slow start in the first half by the team.

“Yeah, we got off on the wrong foot.  We stopped ourselves, making self-inflicted mistakes.  We didn’t turn the ball over and were able to get into that rhythm that I’ve talked about in the past.  Our standard and expectation is pretty much going on every drive.  That’s what we’re capable of doing when we’re focused, executing and finishing.  That is our standard and that’s what we’re going to hold each other to.  When you’re not doing that in the first half it’s tough, but we understand that this is the NFL and it’s tough.  It’s not always going our way and always be perfect but we’ve got to be committed to each other and committed to our game plan and just stay at it.”

In their final six games of the regular season the Cowboys will host Indy, and then host the Houston Texans.  Then the travel to Jacksonville, host Philadelphia on Christmas Eve in a key NFC East showdown.  Then they have a Thursday night showdown on December 29th in Nashville against the Titans before closing out on the road against Washington.

Looking at that schedule, Dallas SHOULD be 4-2 at worst, and they have a great chance to go 6-0 IF they can continue to play the way they have the last couple of games.  It will be very interesting to see how things play out.

KC Esports has best season on record, will compete for conference championship this week