As expected, the Gilmer Buckeyes took care of business Friday night at Mesquite Memorial Stadium, defeating the Gainesville Leopards by the score of 60-20.  Ashton Haynes score 4 rushing TDs on the night and Will Henderson added to TDs via the running game.  The win moves Gilmer to 11-0 on the season and the loss ends the Leopards season with a 5-7 record.  The Buckeyes will now move on to face 12-0 Carthage, a 61-30 winner over Van Alstyne in their Area contest.  The game will be played Friday, Nov. 25, at 6 p.m. at Lobo Stadium in Longview and Gilmer will be the home team.  Without a doubt, the team that wins this game will be highly favored to win the Class 4A DII State Championship three weeks later.

Although the weather was chilly again, there was no rain in the contest and Mesquite Memorial didn’t have the wind factor the Buckeyes faced a week earlier at Rose Stadium in Tyler.

Gilmer won the coin toss and elected to receive to begin the game.  Jose Govea kicked the ball to the 7-yard line and D’Marion Haley returned the ball up to his 23 where Cade Searcy, Son of Gainesville Coach Neil Searcy.

The Leopards took just 5 plays and 2:40 to move the 77 yards into the end zone for the first score of the game, shocking the Buckeyes.  The score came on a 6 yard run by Searcy with 9:20 left in the opening quarter.  Romeo Cancino added the PAT and Gainesville took an early 7-0 lead.

The Leopards tried an onside kick off but Gilmer recovered the ball at the Leopard 49 and set up shop for the first time on offense with Rohan Fluellen at quarterback filling in for Cadon Tennison who was nursing a slight ankle sprain from the Rusk game.

The offense didn’t miss a lick as the Bucks moved the 49 yards in 8 plays and took 2:50 off the clock, scoring in an 11-yard pass from Fluellen to Ta’Erik Tate with 6:30 left in the first quarter.  Govea added the extra point and the game was tied, 7-7.

The ensuing Govea kick traveled down to the Gainesville 18 with no return.  The Black Flag forced a quick three-and-out and after a 31-yard punt to the 36 and a 19-yard return by Tate to the 17 Gilmer was in business again.

It took just 1 play and 7 seconds for the Buckeyes to find the end zone for the second time.  The score came on a 7-yard run by Ashton Haynes with 4:32 left in the first quarter.  Govea nailed the extra point and the Bucks led 14-7.

On their next possession Tre Bell fumbled the ball and Geramiah Noble recovered for the Black Flag on the Gilmer 43.  Sadly, it was three-and-out and after a punt the Leopards took over at their 15.

Gilmer began their next drive at their 30 and took 1:36 and 4 plays to move the 70 yards for another score.  The TD came on a 3-yard run by Haynes with 8:40 left in the half.  Aron Bell ran in for the 2-point conversion out of the swinging gate and Gilmer regained the lead 22-14.

The Leopards began their next drive after the score on their 38 and on the first play of the possession Searcy fumbled the ball and Alec Sims recovered on the Gainesville 36.

It took just 1 minute and 4 plays for Gilmer to move the 36 yards for another TD.  The score came on a 5-yard run by Haynes with 7:33 left in the half.  Govea added the extra point and the Gilmer lead advanced to 29-14.

After a 22-yard return on the next kickoff the Leopards moved down to the Gilmer 12 and on 4th down Cancino attempted a 30-yard field goal that was wide left and Gilmer took over on their 20 with 3:59 left in the half.

Fluellen led the offense on an 80-yard touchdown drive that took 2:58 off the clock and was 10 plays long.  The drive ended when Haynes ran into the end zone from 6 yards out with 1:01 left in the half.  Govea’s extra point try was good and Gilmer led 36-14.

It was obvious on their next possession that the Leopards were highly overmatched, as they fumbled the ball away to the Bucks on the second play of the possession when Searcy was hit and the ball bounced backwards.  After a scramble, Gilmer recovered at the Leopard 12 with 28 seconds left in the half.

Fluellen got into the end zone on a 12-yard run on the first play, but the Buckeyes were called for holding.  They also had another penalty for a false start but managed to overcome both penalties and get into the end zone again with 5 seconds left in the first half.  The score came on a 7-yard pass from Fluellen to Tate.  Govea was true on the extra point kick and Gilmer in total command leading 43-14.

Gainesville ran 1 play and the half ended with the Buckeyes feeling much better about their early struggles.

Gilmer received the second half kickoff from Cancino.  The kick was onside and Gilmer fair caught the ball at their 46.

It didn’t take long for Gilmer to get into the end zone yet again, as they moved the 46 yards in 2 plays and just 17 seconds.  The first play was a 35-yard run by Will Henderson and he ended the drive with a 21-yard run for the TD with 11:43 left in the third quarter.  After Govea booted the extra point the Buckeyes led 50-14.

There was no further scoring until the Leopards went on a 57yard drive that took 7 plays and 3:56.  The score came on a 17-yard TD pass from Searcy to Luna with 3:53 left in the third quarter.  Cesar Dela Rosa’s extra point try was no good after having been partially blocked and the score was 50-20.

Gilmer took over on their 38 after a pooch kick following the Gainesville score, and on the first play of the possession Will Henderson blasted around left end for 62 yards into the end zone for another Buckeye TD with 3:35 left in the third quarter.  Govea added the point after and the Buckeye lead advanced to 57-20.

Gilmer got their final tally of the night with 4:31 left in the game after a 32-yard Govea field goal, capping a 14-play, 42-yard drive that consumed a whopping 7:45 off the clock, making the score 60-20 in favor of Gilmer.

Each team had one more possession with the Bucks kneeling in victory formation three times before punting the ball away.  Gainesville got the ball back, ran one more play and the game ended with the Buckeyes claiming the Area championship 60-20.

We caught up with Rohan Fluellen after the huge victory and said that his performance looked like at quarterback looked like he had been starting all year long.  He humbly replied, “Yes, sir.  I just felt like I had to step up and it was something that I had to do for the team, for the team’s sake and I loved it.”

We asked Rohan if the team didn’t feel like this was the year the Buckeyes would take Carthage down.

When we talked with Coach Alan Metzel we had to first ask his thoughts about the great job Fluellen did taking over for Cadon Tennison and getting the job done in a major way.  He agreed that Rohan looked like he’d been starting all year.

“You’re absolutely right.  What he was able to do tonight, I don’t know that people really understand.  He made it look so natural.  It’s just a testimony to the gifts he has.  God blessed him, no doubt.  Then on top of that, his mind.  We always brag about the way he plays in his mind.  He had to do all the stuff.  To be able to pull off tonight what he did, I’m so proud of him.  He led, just an amazing job and his guys followed him; a lot of fun to see this happen.”

We also asked Coach Metzel how much it helped Rohan since he was a wide receiver and knew the plays by heart.

“When you tell him once he knows it.  We went through the week and Coach (Kerry) Lane was talking about ‘hey, you know, you got it this week?’ and he said ‘coach I’m going to make you famous!’  He plays with a swagger and I can’t say enough about him.”

We pointed out that just as Coach Searcy had stated, the Leopards were not intimated by the Buckeyes and they never gave up.

“His son is just a great athlete and a baller.  He’s their Rohan and just plays so well.  Coach Searcy was nothing but class the whole time with me dealing with him and so forth, so they came out to play and they were aggressive, so hats off to them on that.

We also asked the coach’s thoughts on the play of the team once they got past the somewhat slow start early on.

“Some of that (the early struggles) is attributed to the changes we had to make this week.  It took us a little while for everybody to fit into it because we attacked it different.  It was a different type plan.  Once we kind of got that settled then I felt like we hit a groove.  Ashton just was dominating.  Man he was dominant, so that’s another person we can really brag on.  I’m really proud of the seniors and how they stepped up.”

We brought up the fact that the Black Flag Defense forced 3 turnovers in the game and that they just keep playing lights out.

“They do, they’re people that we can lean on week in and week out and when you’ve got a good defense it helps you to be able to adjust your game plan because you’re confident you’re going to get opportunities.  I’m just thankful that we came up and took care of business.  I think there’s a temptation to look at a Carthage and everything and our guys really focused on play this week.  I think having some of the injuries made them think 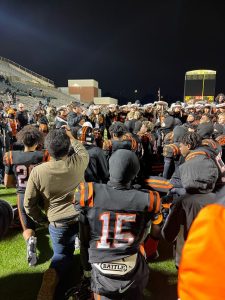 they had to do the job.  We took care of this week.  We played it, we lived in the moment, and that’s what you want.  Now we’ll go tackle the challenge that’s ahead.”

We ended by asking if he agreed that this 2022 Buckeye team is confident that they can take on Carthage and come out on top next week.

“That’s right; I don’t even need to elaborate.  We feel confident that we can go play next week and we’re going to do that.”