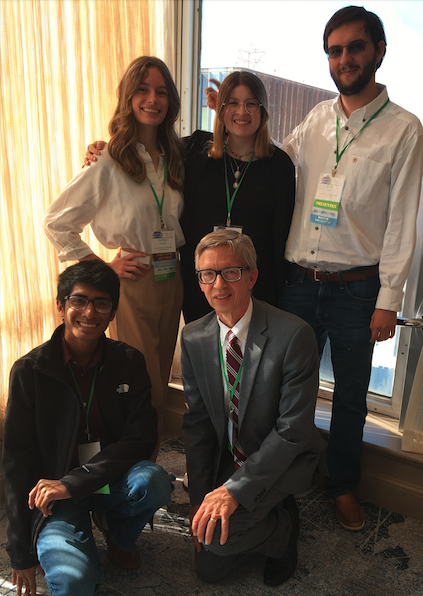 Every year since 2008, NTCC Presidential Scholars have qualified to present work at the annual conference of the oldest intervarsity honors organization in the United States, the National Collegiate Honors Council.  This year five sophomores presented alongside a cast comprised overwhelmingly of university upperclassmen from New York City to San Francisco.

The NTCC group included scholars who also have received a significant amount of private and institutional support.  For the first time, the NTCC presenters included a Dr. and Mrs. Bradley Witt Scholar—in this case, Evan Sears, thanks to generous support from the Witt family.  Other presenters included the Russell Mowery Scholar, Jordan Chapin, the Texas Heritage National Bank Scholar, Skylar Fondren, and the James and Elizabeth Whatley Scholar, Victor Diaz.  An Honors Scholar, Amy Lopez, also made the cut to present.

For the ninth time, NTCC’s film panel specializing on regional legends was accepted as one of the fifty general sessions of the conference.  The four state Caldwell Awards generated by the film initiative at NTCC, as well as the many awards and publications secured by film scholars have helped make Honors Northeast, the honors program at NTCC, into a showcase of creative endeavor, and community development.  This year, Victor Diaz, the producer of the Carroll Shelby film, Dr. Andrew Yox, Honors Director, Skylar Fondren, the writer and director of the current film on Minnie Fisher Cunningham, as well as key participants, Jordan Chapin and Evan Sears presented the film work.  The panel included highlighted segments of the Carroll Shelby film, and assessments of the community-forming potential of niche cinema. 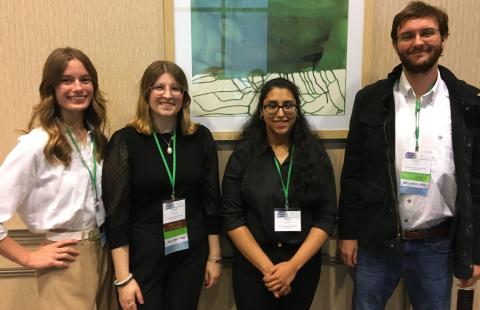 Four NTCC sophomores—Jordan Chapin, Skylar Fondren, Amy Lopez, and Evan Sears, also presented posters at the Dallas conference. Chapin, currently President of Phi Theta Kappa in Texas, presented her work on Legendary Housewives in Northeast Texas for the sixth time in a public venue.  Along with Skylar Fondren, and Evan Sears, Chapin comprised the panel that secured NTCC’s first Portia Gordon Award, for the best student panel, at the East Texas Historical Association in October. Skylar Fondren presented her Britt-Award winning work on the making of news deserts. The Carroll Shelby film scholar, Evan Sears presented his work on the emissary of the muscle car.  Finally, Amy Lopez was able to attain a national accolade with her steadfast work in two courses at NTCC last year on South Texas as a political harbinger for what Texas will become.

Just as Chapin heads a large regional collegiate association, Fondren heads a large regional intervarsity association. As the student representative of the Great Plains Honors Council (GPHC), one of the six regional divisions of the NCHC, Fondren met in Dallas with the council’s executive committee. The NTCC student leader joined a professional board consisting of four other regional professors and administrators from Oklahoma State, Midwestern University, Brazosport College, and Hutchinson Community College of Kansas.  Fondren and Yox also attended the plenary meeting of the GPHC at the NCHC Dallas meeting.

Honors Director Dr. Andrew Yox noted: “the NTCC presence at the NCHC dates back to former president, Dr. Charles Florio’s enthusiasm for this association, and his hope that NTCC would be involved.  Since then, we have had a stalwart student minority in honors who have risen to the occasion each year.  The systematic support of the whole college community has been their foundation, and the college’s mission of ‘student success’ their guiding star.”

Texas’ rural hospitals are — once again — at grave risk of closing