Despite sporting a disappointing 1-4-1 season record, the Houston Texans are still in the running to win the AFC South Division, something that most Houston fans haven’t even thought about.  Coming into Sunday’s game the Texans’ opponents, the Tennessee Titans, 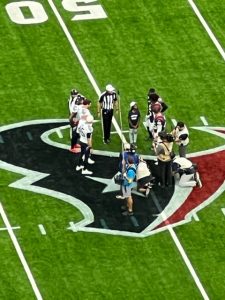 were at 2-0 and on top in the division.  The Jacksonville Jaguars were sitting at 1-2 and in third in the division while Indianapolis Colts were at 1-3-1 in fourth place, and the Texans were in second place at 1-0-1.  That made the game a HUGE one for Houston, because IF they could pull off a win they would be 2-0-1 in the division and Tennessee would be at 2-1, thus putting the Texans in first place in the division and giving them momentum going into this coming Thursday night’s game against the undefeated Philadelphia Eagles.  Even with so much to play for, it wasn’t in the cards.  When the dust cleared, the Titans claimed a 17-10 win and remained atop the division. 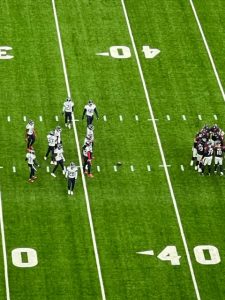 Houston won the coin toss and elected to defer to begin the game.  Ka’Imi Fairbairn kicked the ball out of the end zone to begin the game and Malik Willis in relief of an injured Ryan Tannehill brought the Titans on the field to begin their first drive at their 25.

As expected with Tannehill out, the Titans relied on their All-Pro running back Derrick Henry to begin the game.  He carried the ball the first 2 plays and moved his team down to the Houston 32 before the Houston defense dropped Willis for an 8-yard loss.  Tennessee was unable to bounce back from the loss, forcing a 48-yard Randy Bullock field goal attempt.  The kick sailed wide right and was no good and Houston began their first drive at their 33.

Davis Mills drove the Texans down to the Titan 31 where he was intercepted; ending the drive and setting the visitors back up at their 31 for their second possession of the day.  The Houston defense forced a three-and-out and following a Ryan Stonehouse punt and an illegal block on the return, Houston began their second possession at their 6 in a precarious position.

They didn’t turn the ball over, but managed only 2 yards in 3 plays, forcing Cameron Johnston to kick the ball away on 4th down.  The ball was fumbled and Dare Ogunbowale recovered for Houston at the Titan 41.

The great field position meant nothing, as the Texans couldn’t manage a first down on the possession and Johnston punted the ball away once again.  After a fair catch, Tennessee took possession back at their 7.

After picking up two first downs, Houston’s defense rose to the occasion and intercepted Willis and the ball was returned down to the 11-yard line.

Sadly, the inept offense lost yardage on the possession, but Houston was able to salvage, something off the theft, as Fairbairn nailed a 43-yard field goal with 10:40 left in the first half of play, giving the Texans a 3-0 lead.  The drive was 4 plays, -13 yards and took 1:11 off the clock.

Tennessee started their next drive at their 18 following a 17-yard return of the kickoff. 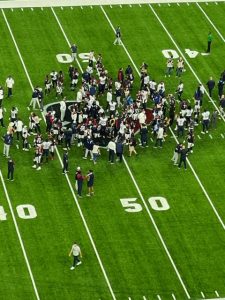 Houston forced a three-and-out on the possession and after a 55-yard Stonehouse punt Mills and the offense were back on offense at their 10, but they couldn’t muster 10 yards in 3 plays and ended up punting the ball back to the Titans.  The kick was returned to the Houston 38 and Willis brought his unit back on the field.

The Titans used the legs of Derrick Henry and got into the end zone on the possession when he ran for a TD of 29 yards with 4:20 left in the first half of play.  Bullock added the PAT and the Titans took the lead, 7-3.  The drive was 3 plays, 37 yards and took just 53 seconds off the clock.

After the ensuing Bullock kickoff was returned to the 18, Houston went back on the offensive again.  Once again, it was three-and-out for the anemic Houston offense.  Johnston punted the ball down to the 18 where it was fair caught with 1:53 left in the half.

The Texans defense rose to the occasion and forced a punt with 20 seconds left in the half.

There was no further scoring until Derrick Henry ran into the end zone from the 1 with 6:31 left in the third quarter.  Bullock’s extra point kick was good and the Titans increased their lead to 14-3.  The drive was 9 plays, 65 yards, and took 6:19.

Mills completed two long passes on the Texans final possession of the game with less than a minute left and quickly the team had first-and-goal at the 3.  On the next play Mills hit Dameon Pierce for a 3-yard TD and after Fairbairn’s PAT kick cut the deficit to 17-10 with just 17 seconds left in the game.  The drive was 12 plays, 90 yards and took 3:46.

An onside kick by Fairbairn was recovered by Robert Woods at midfield and the Titans took a knee out of victory formation to end the game and give Tennessee the 17-10 victory.

Coach Lovie Smith summed up the game with his opening comments when he faced the media after the deplorable loss.

“When you get dominated on both sides of the football, I’m talking about, up front, it’s going to be a tough day. It was bad football today we played, and you end up with a game like that.

You look at the score and you say, ‘Hey, you had a chance to win.’ Never really were in it. Early on, of course, the interception was big where we had a little momentum to be able to get something going then. Good play on the punt return to get the ball out. Good play by Steve Nelson to intercept the ball. But besides that, just not a whole lot to talk about. Defensively we haven’t been able to really stop the run all year, and today that definitely showed up. And on the other side of the football too. We say we want to run the football, and it’s hard to get anything going when you can’t run it.”

Things don’t get any easier for Houston as they will be hosting the undefeated Philadelphia Eagles at NRG Stadium on Thursday Night Football in just 4 days.  All they need is a miracle to have a chance in that game.