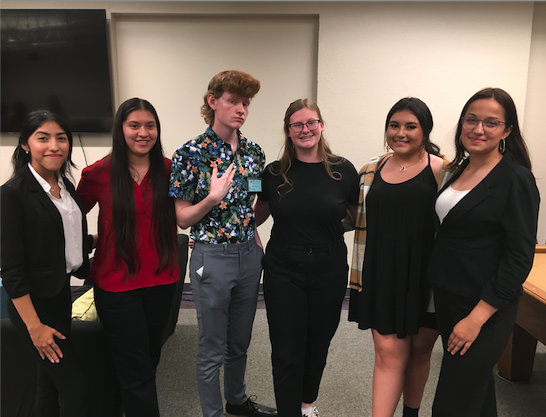 The NTCC Webb Society, comprised mainly of students of Honors Northeast, presented their eighth trailer of an upcoming film at a fall meeting of the State Walter Prescott Webb Society, 14 October, in Nacogdoches.   The trailer and coming film are entitled, “Texas Suffragette:  The Minnie Fisher Cunningham Story.”  The film was written and directed by Texas Heritage National Bank Scholar, Skylar Fondren. The group is working to premiere this spring, the first feature-length film on the surprising victory of the Texas suffragettes.  In June of 1919, thanks to their efforts, Texas became the ninth state in the union to adopt the Nineteenth Amendment. It was also the first southern state to bolt from an anti-suffragette coalition led by the former Confederate states.

The Walter Prescott Webb Society, initiated in 1973 by University of Texas Professor, Joe Frantz, is the collegiate auxiliary of the Texas State Historical Association.

Six first-year scholars of Honors Northeast discussed the making of the film about Cunningham, and the development of her story. Michelle Calderon highlighted the beginnings of the film initiative with an early-June of 2022 trip to the University of Houston.  Film scholar, Keren Valencia, discussed the indirect brand of politics that made the Texas women successful. Aubrey Watkins discussed the response of students to the sudden imperatives of acting.  Victoria Matiz covered the role of students handling camcorders, and boom mics for the first time, and Neida Perez, the tight itinerary of film week that began at the Whatley Center and ended in Fredericksburg.  Finally, Sam Pollan, the film producer, showed the film trailer that he had edited.  The trailer highlights the challenges faced by Cunningham.

This year’s film trailer owes a great deal again to Texas composer Kenny Goodson.  He created the film score after watching the footage compiled by Pollan.  Goodson also plays a role in the film as the minister who presides over the marriage of Cunningham and her husband.  The trailer center-stages Honors Student, Skylar Hodson, who played the lead role as Minnie Fisher Cunningham.  but also features Sam Pollan, who played the role of her estranged husband, B.J., Dr. Maryna Otero, now an adjunct at NTCC and also the ESL Director at Mount Pleasant High School, has a prominent role in the trailer as Annette Finnegan, who galvanizes Minnie Fisher Cunningham to head the Texas movement. 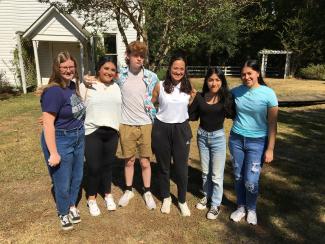 Texas’ rural hospitals are — once again — at grave risk of closing