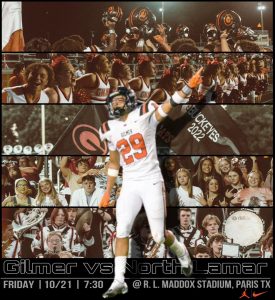 The Gilmer Buckeyes made the 90-mile voyage north on Highway 271 to Paris Friday night and moved their season record to 7-0 and their District 7-4A DII record to 3-0 with a blasting of the North Lamar Panthers during Yamboree week.  The loss drops North Lamar to 3-5 on the year and 1-2 in district competition.

A good group of the Buckeye Army made the trip to Paris and we want to encourage everyone to be at Jeff Traylor Stadium Friday night for Senior Night and the unveiling of the new orange uniforms the team will be wearing for the game against the Spring Hill Panthers.

As for the North Lamar game, Gilmer won the coin toss and elected to receive to begin the contest

Garrett Russell kicked away to the Gilmer 41 where Cade Bowman pounced on the ball and Gilmer set up for their first possession.

Cadon Tennison led his team down the field and into the end zone for the first score of the game with 9:59 left in the first quarter.  The score came on a 4-yard TD run by Will Henderson, capping off a 6-play, 59-yard drive that took 2:01.  Govea nailed the PAT and Gilmer took an early 7-0 lead.

Govea kicked the ball down to the 10 where it was fair caught and it was brought out to the 25 and Blake Hildreth brought his offensive unit on the field for the Panthers first possession of the night.

The Black Flag forced a quick three-and-out and following 33-yard Russell punt Gilmer was back on offense for the second time at their 37.

Tennison led the Bucks into the end zone once again, taking 2:11 and 5 plays to move 63 yards for the score.  The TD came on a 13-yard run by Rohan Fluellen with 5:10 left in the opening frame.  Aron Bell ran into the end zone for the 2-point conversion out of the swinging gate and Gilmer increased the lead to 15-0.

The Black Flag forced another three-and-out on the Panthers and following a short punt the Buckeyes were on the offensive again at the NL 46.

It took just 12 seconds and 2 plays for Tennison to lead the offense into the end zone once again.  The first play was a 44-yard pass from Tennison to Geramiah Noble and on the next play Will Henderson ran into the end zone from the 2 with 2:53 left in the first quarter, pushing the Gilmer lead to 21-0.  Govea was true on the extra point and the Bux led 22-0.

After once again calling for a fair catch, the Panthers began on their 25, but they had the same three-and-out and Gilmer went back on offense at the Panther 48 following the Russell punt.

On the first play of the possession the Buckeyes fumbled the ball away and North Lamar recovered at the Gilmer 48.

The Panthers got a good drive going and looked as though they would get into the end zone, but the Black Flag came up big with a tremendous goal line stand and turned North Lamar, taking over on their 1 on downs.

The offense got a good drive started and then were pushed back by a 15-yad penalty.  They overcame the penalty plus another questionable penalty and move 99 yards in 12 plays over 3:58.  The drive ended when Ke’Vion Brinkley found the end zone from 1-yard out with 1:22 left in the first half.

After another fair catch the Panthers began their next drive from the 25.  They ran 3 plays and the half ended with Gilmer leading 29-0.

Govea kicked off to begin the second half and once again North Lamar began at their 25 after a fair catch.

Just as they began the game, the Black Flag Defense forced a three-and-out once again.  Russell punted the ball from his 7 up to his 47 and the Buckeyes went back on offense.

The possession didn’t last long as Tennison was intercepted on the first play of the possession by Cael Del Toro.  During the return Gilmer was called for a 15-yard personal foul, setting the home team up with a first down at the Gilmer 47.

The Black Flag rose to the occasion and forced yet another three-and-out.  The Bucks ere called for another questionable personal foul on the punt and after the mark off the offense began at their 12.

Govea’s ensuing kickoff went out of the end zone and the Panthers began once again from their 25.

After another three-and-out by the Black Flag, the Panthers punted away again.  The punt traveled from the Panther 28 to the Gilmer 34, setting Tennison and company up once again.

By this time the Buckeyes were playing a ton of backup players and after moving down to the Panther 26 Gilmer turned the ball over on downs at that point with 10:41 left in the game.

North Lamar drove 74 yards in 10 plays in 5:48 against almost totally backup players to find the end zone for the first time in the game.  The score came with 4:53 remaining in the contest when Quay Mason ran in to the end zone from the Gilmer 3.  The PAT by Russell was low and no good, making the score 35-6 in favor of the Buckeyes.

The Russell kick went out of bounds but Gilmer was called for roughing the kicker, so there was a re-kick from midfield.  The next kick was returned from the end zone by Will Henderson up to the 28 but the Bucks were called for holding, moving the ball back the Gilmer 11.

Jaden Edmond came in to relieve Tennison at quarterback on the possession.  He led the offense on a 7-play, 89-yard drive that took 3:08 off the clock.  The score came on a 22-yard TD run by Alex Simms with 46.9 seconds left in the game.  Govea’s kick after the TD was good and Gilmer led 42-6.

Following the kickoff, the Panthers took over one last time at their 32-yard line.  They ran 3 plays and the game ended, giving the Buckeyes a 42-6 win.

We visited with Coach Alan Metzel after the game and asked him despite the low score against an undermatched team if he didn’t feel he accomplished what he wanted to in the game, getting a lot of playing time for a number of backup players.

“Absolutely, you know you’ve got to get to a certain place in the game where you go, ok, we’re taking guys out and we’re putting other people in.  We’ve got to get other guys ready.  They go through a progression of mistakes and making plays and so forth, so that’s all part of it.  Honestly, the score is really not the issue; it’s not that we’re not going to win.  Once you get it to a certain point, we’re trying to create improvement in our depth.  We were able to do that tonight, so I am pleased with that.”

We had to ask the coach his thoughts on the lights out performance once again by the Black Flag Defense.

We also asked Coach Metzel his thoughts on the fantastic job that backup quarterback Jaden Edmond did leading the team on an 89-yard TD drive.

“Jaden is very capable.  We were able to get Alex Simms in there; Brayden Rash in there with some reps, Kivi (Ke’Vion Brinkley) got a handful of reps that we were wanting throughout the game, so it gave us a chance for those guys to have to run the offense and move the ball down the field.  I think they did a great job of staying focused.  They converted some big plays and got the ball in the end zone.”

We concluded by asking the coach if he agreed besides getting backup players some quality experience if it was also important to get the key players out after a certain point to make sure the team didn’t lose any of them to an unnecessary injury in a game that was never in doubt.

“That’s for sure something you’ve got to factor in.  Again, that’s part of how long are we going to play them, when are we taking them out and so forth.  That’s just part of a game like this that you have to manage.  I think we’re going to be ok.”

HEAD COACH ALAN METZEL at right ponders the call the officials just made.

The only disappointing things about the game were the referee who threw several flags against the Buckeyes that were highly questionable and the fact that the hosts turned the lights out very quickly after the end of the game as the band and Stars were trying get their things together and to the buses that were parked a long distance from the stadium.  One would think that those in charge of the lights would have been more sportsmanlike since the Buckeyes didn’t run up the score on them.  Shame on you, North Lamar!  Rant over, Buckeye fans.