Every now and again, both during and after his two-term presidency, Bill Clinton espoused sound immigration thoughts that focused on the nation’s best interests. Most recently, Clinton, without naming Joe Biden, took direct aim at the sitting president’s open border fiasco.

On a CNN podcast, and in response to a question about economic migrants who are, in the host’s description, “gaming” the asylum system, Clinton replied that “there’s a limit” at which point open borders will cause “severe disruption.” Clinton added that the established immigration protocols, presumably a reference to the traditional agencies that assist incoming immigrants, function on the assumption that border conditions would “be more normal.”

“Severe disruption” may be the kindest way to describe the chaos in the Rio Grande Valley and other entry points along the Southwest Border. And severely disrupted is an understatement to define the conditions in sanctuary cities New York, Chicago and Washington, D.C. where the mayors are grappling unsuccessfully to accommodate the migrants that Texas and Florida governors Greg Abbott and Ron DeSantis send north. New York Gov. Kathy Hochul summoned the National Guard to help Adams with his plan, still in flux, to relocate the migrants to a Randall Island tent city. Adams, who declared the incoming migrants’ need for assistance “a humanitarian crisis,” pleaded to no avail with Biden for a minimum $500 million emergency aid infusion. Having no money to deal with incoming migrants is as disruptive, to use Clinton’s word, as conditions get.

Clinton has long been aware of over-immigration’s effect on American citizens. In his 1995 State of the Union address, given shortly after Republicans picked up eight Senate seats and a net 54 House seats post a GOP mid-term rout to win congressional control for the first time in four decades, Clinton spoke about the anxiety Americans experience during periods of unchecked immigration. Clinton listed many dangers that illegal immigration presents to Americans that included illegal hiring, the subsequent U.S. job losses and providing costly social services. Clinton’s word-for-word conclusion: “It is wrong and ultimately self-defeating for a nation of immigrants to permit the kind of abuse of our immigration laws we have seen in recent years, and we must do more to stop it.” 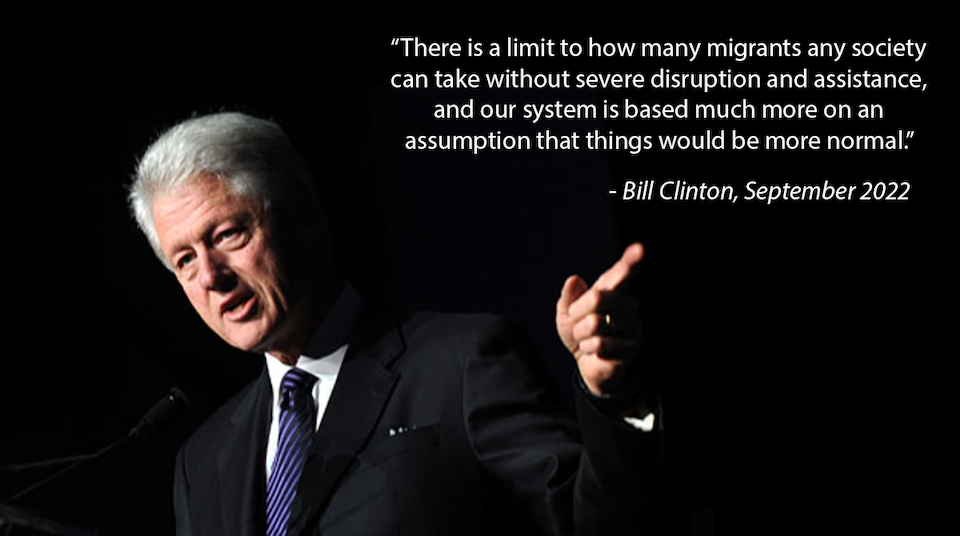 During his SOU speech, Clinton mentioned Barbara Jordan, the former U.S. representative who chaired the U.S. Commission on Immigration Reform. The commission’s goal was to establish “credible, coherent immigrant and immigration policy.” The African-American Democrat from Texas endorsed significant legal immigration reductions with an emphasis on high-skilled admissions, fewer refugees, more deportations and a chain migration overhaul that would limit sponsorship to nuclear family members. Jordan distilled her immigration vision in a sentence: “Those who should get in, get in; those who should be kept out, are kept out; and those who should not be here will be required to leave.

However, Jordan died just months after releasing her report, after which a civil rights, Hispanic advocacy coalition opposed to Jordan’s immigration goals strong-armed Clinton into backing away. Had Jordan lived, her presence would have kept Clinton committed to her commonsense immigration reform rules.

Should the GOP manage to recapture Congress, no sure thing, the results won’t spawn a 1995-style immigration awareness in Biden similar to Clinton’s. As Vice President, Biden continuously hailed “constant” and “unrelenting” immigration stream “in large numbers” as America’s source of strength. Given the red carpet welcome Biden has extended to millions of illegal immigrants and got-aways, complete with, in many cases, parole and work authorization, a presidential immigration awakening is highly improbable.

Joe Guzzardi is a nationally syndicated newspaper columnist who writes about immigration and related social issues. Joe joined Progressives for Immigration Reform in 2018 as an analyst after a ten-year career directing media relations for Californians for Population Stabilization, where he also was a Senior Writing Fellow. A native Californian, Joe now lives in Pennsylvania. Contact him at jguzzardi@pfirdc.org.

Video: Why I Choose to Live a Simple “BORING” Life Over Hustle Culture