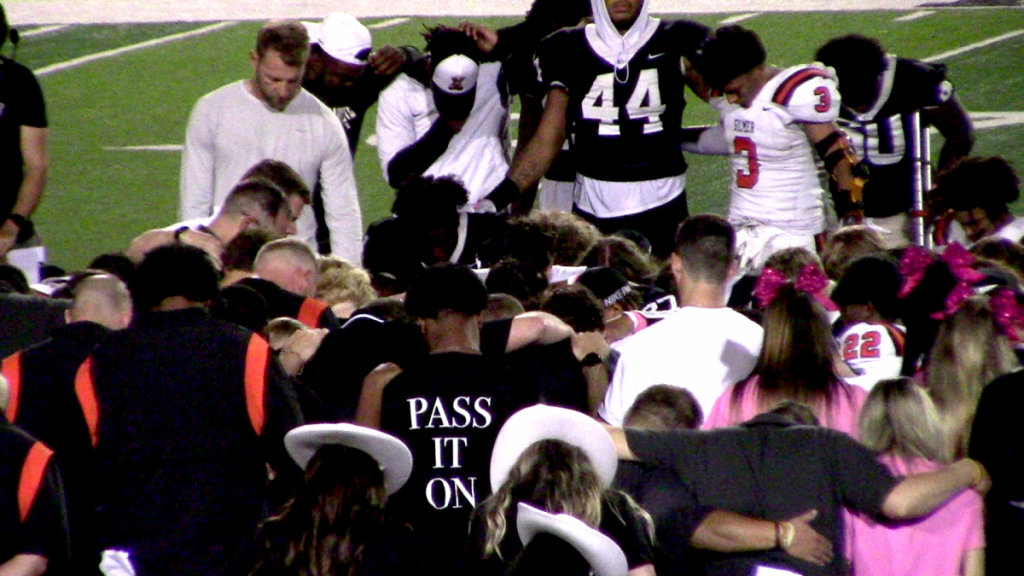 THE TWO TEAMS meet at midfield after the game to reflect upon the intense competition they have just experienced and then pause for a moment of prayer and meditation. Pleasant Grove head coach Josh Gibson has his arm around Gilmer head coach Alan Metzel, a sign of the tremendous respect the two programs have for one another.

The Gilmer Buckeyes traveled to Texarkana Friday night to take on the Pleasant Grove Hawks in the District 7-4A DII opener.  Gilmer led the series all-time 11-6 going into the contest.

The Buckeyes came into the game with a 3-game winning streak over the Hawks and went into the fray hoping to extend that streak, which they did, winning the game by the score of 35-14.  The win gives Gilmer the inside track to their third consecutive district championship.  The Liberty-Eylau Leopards could be a dark horse based on their play in non-district competition.  The Buckeyes will entertain the Leopards next Friday night at Jeff Traylor Stadium in Gilmer.

The Hawks received the opening kickoff after winning the coin toss.  Jose Govea kicked away and the ball was returned two yards from the 25 to the 27.

Gilmer moved the ball down the field but at a key moment Tennison and his intended receiver weren’t on the same page and quarterback Ahkhari Johnson who also started on defense intercepted the ball at the PG 6 and returned the pic up to the 34, but the Hawks were called for an illegal block, putting the ball back at the 24.

The Black Flag forced a three-and-out again and Gilmer set up on their 26 after the punt.

The Bucks picked up one first down thanks to a face mask call but were forced to punt the ball away on the next series.  PG went back on offense at their 38 following the kick.  Once again the Black Flag forced a three-and-out.

Tennison brought the offense back on the field at the Gilmer 23 after the punt.  The Buckeyes had to grind it out and were aided by 30 yards in penalties, but they finally managed to get into the end zone on a 1-yard TD run by Ashton Haynes with 10:18 left in the first half of play.  Jose Govea added the PAT and Gilmer led 7-0.  The drive was 9 plays, 77 yards and took 3:26.

For the fourth time in as many tries, the Black Flag forced another three-and-out.  After the punt Gilmer went back on the offensive at their 28.  For the first time on the night Gilmer went

three-and-out.  PG set up on their 30 on their fifth possession of the night.  Once again, the Buckeye Black Flag forced another three-and-out, the sixth of the first half.

On the first play of the possession Tennison hit Rohan Fluellen for a 1-yard TD but the Buckeyes were called for a 10-yard holding pushing the ball back the PG 11 with 5.5 seconds left in the half.  Coach Alan Metzel gambled on the next play and went for a TD rather than take the easy field goal.  The decision proved to be masterful, as Tennison hit Fluellen on an 11-yard TD strike with 1 second left in the half.  Govea nailed the extra point and Gilmer extended the lead to 14-0.

After a squib kick to the PG 47 Johnson threw incomplete down the field and the half ended with Gilmer to get the second half kickoff.

On the second half kickoff Halston Baca booted an onside kick that was taken by Noble at the Gilmer 39 and Gilmer went back to the offensive once again.  It took just 1:04 and 3 plays for the Buckeyes to find the end zone again.  The first play was an 8-yard pass to Fluellen, followed by a 22-yard run by Haynes with and then Tennison finished the drive off with a 30-yard run into the end zone with 10:55 left in the quarter.  Govea added the point after touchdown and the Gilmer lead advanced to 21-0.

The ensuing kickoff went to the PG 28 and was returned to the 40 where the Hawks set up for their first possession of the half.  On the second play of the possession Johnson picked up 13 yards on a run for the first 1st down of the game.  He led his team on a 5-play, 60-yard drive that consumed 2:29 off the third quarter clock.

After another onside kick attempt, this one out of bounds, Gilmer set up on their 49 for their second possession of the half.  They managed one first down before back-to-back penalties forced Gilmer to punt the ball from the PG 46 down to the 6.

The Hawks picked up two first downs and then on the first play of the third series Omero Orona intercepted Johnson and returned the ball 31 yards for a pick-6 with 3:13 left in the third quarter.  Govea was true on the extra point attempt and Gilmer led 28-7.

The teams exchanged punts and on their next possession the Hawks moved 65 yards in 6 plays over 2:09 to get into the end zone.  The score came on a 22-yard run by Spencer Danner with 9:04 left in the game.  After a successful extra point the Hawks narrowed their gap to 28-14.

Frustrated by their opponent’s score the Bucks were determined to get ball into the end zone.  PG kicked onside once again and Gilmer covered the ball at their 49 and Tennison and the offense went back to work.

It took just 1:19 and 6 plays for the Buckeyes to cover the 51 yards and score another TD.  The score came on a 30-yard pass from Tennison to Fluellen with 7:36 left in the game.  Govea added the extra point and the Gilmer lead advanced to 35-14.

There was no further scoring in the contest and Gilmer moved to 1-0 and in the driver’s seat for their third district championship in a row.  PG falls to 0-1 in district.

“Well, it’s huge to be able to come into a hostile environment against the number 3 team in the state.  You know, we made mistakes, they made mistakes, but you just have to play 1 play longer than your opponent.  Our defense tonight kept giving us opportunities.  We were finally able to capitalize on some things and get the win and I’m just so thrilled for our guys.”

We wanted to also get his thoughts on the total dominance of the Black Flag Defense in the first half, forcing 6 three-and-out possessions through the first two quarters.

“Amazing job of coaching by the defensive staff, Coach Edwards, the plan, the execution of it–they were on fire tonight, on point and just so proud of them.”

We wanted to know about the decision to go for the TD rather than a field goal with 5.5 seconds left in the half at the PG 11, and Coach Metzel responded, “Well, we felt like if we throw it quick, then you’ve got a chance to line up and do something else.  We knew that was a play that wasn’t going to hold it long and then we could make our decision from there.  Good job by Ro, beautiful throw by Cadon and a huge momentum swing.”

We asked how big it was to get the touchdown rather than the field goal on that play with just over 1 second left in the half.

“Well, I think it was really the turning point in the game.  That was what I think what put us over the top.”

We pointed out that the team did a great job of holding down penalties in the game as well, and the coach agreed and said, “(It was a) super job of guys just doing their job.  They could have lost their focus over those open weeks but they didn’t.  They just kept pushing and it showed tonight.”

We ended our interview by asking the coach if he was surprised at how well the PG defense played in the game.

“I’ll say this, I want to compliment them.  They did play well.  We misfired multiple times where if we had just been a little sharper I think we could have gotten something, but that’s part of it.”

We also visited with Defensive Coordinator Tommy Edwards and began by asking his thoughts on the dominance of the Black Flag Defense in the big game.

“It was huge.  We knew coming out that their chili was going to be hot with the last 3 (wins) coming to us and we just preached to the kids it’s 7 seconds.  That’s all it takes.  If you stay focused for 7 seconds, the length of the snap and the end of a play, be disciplined, do your job, we might not get a shutout but we’re going to get a win.  They came out in the first half, we got the ball back to the offense as many times as we could and the kids played their tails off.”

We wanted to know what it did for the defense when the offense scored the big TD with just over 1 second left in the half after the PG turnover at their 1 with 9 seconds left in the half.

“It was huge and it was just a big huge momentum swing back to us.  Even bigger than that was the turnover on the 1 with 9 seconds left when we stuff them in the hole and get the ball right back.  That was a dagger right there because we got the ball, scored, came out the second half got the ball and scored, so it was awesome.  (I) couldn’t be more proud for Omero (Orona).  He played his tail off and it was really a big huge turning point for us.”

We finished our conversation asking Coach Edwards how big it was knowing that the Hawks were not a good passing team gave them the opportunity to put 8 men in the box defensively.

“We preached to the kids that the one thing that scared me was the quarterback scramble on a pass, so we had guys that were spying him.  We kept 8 in the box.  We were going to take away the run and make him do something he didn’t like doing.  The game plan worked to a T; take away the run and make him throw the ball, put some pressure on him when we can, and we did.”

Without a doubt the win was huge for the Buckeyes, but they now have to set their sights on a much improved Liberty-Eylau Leopard team next Friday at Jeff Traylor Stadium.  The Leopards will come into the game at 5-1 and 1-0 in district play after their 40-25 victory over Spring Hill Friday night. 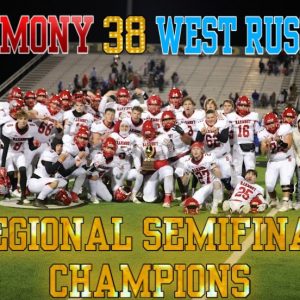