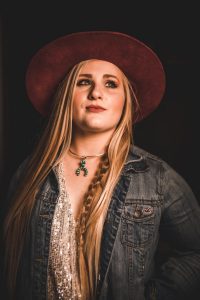 COLLEGE STATION — (October 5, 2022) – She is Texas Country Music Association’s reigning Female Artist of the Year and nominated for the top honor again this year. College Station’s Morgan Ashley has had an incredible 2022 so far, which includes two Top 25 songs on the Texas country charts – and she is now bringing her current hit, “Warning Label,” to life with a powerful music video.

Ashley teamed up with The Playlist Films and Front Pocket Productions to visually tell the story her hit single conveys. “Warning Label,” holds nothing back as it addresses the angst we often feel when in a troubled relationship. She wrote the song with a friend who discovered some toxic things about the guy she was dating. “She said, ‘I wish I would have seen the signs. If he would have come with a warning label, I could have avoided all of this,’” said Ashley.

Ashley knew the song’s relatable message and visual lyrics were the perfect combination for a music video.

“Fans have really connected with this song, and they want to know more about the back story. Shooting a music video just made sense, and I knew who to call,” said Ashley. “I have worked with the guys at The Playlist Films and Front Pocket Productions on projects in the past, and they always know how to bring my vision to life. I love how the video turned out.”

Ashley and team shot the music video at Baker Street Pub in The Woodlands, Texas, and it is now available on her YouTube channel. Click here to view.

Visit www.morganashleyofficial.com to find out when Morgan Ashley will be playing a show in a town near you.

Hailing from College Station, Morgan Ashley grew up raising show cattle and barrel racing. She decided at age 17 to finally pick up the guitar that sat in the corner of her room for years and hasn’t put it down

since! The Texas Music bug bit hard, and she knew she belonged on a stage somewhere in Texas. Morgan currently plays over 150 dates a year at venues across Texas and beyond, introducing her unique brand of country music to fans at each stop. She has had seven songs chart in the Top 40 or higher on Texas Radio, and her all-time Spotify streams are over 100,000! She won the 2021 New Female Vocalist of the Year award at the Texas Regional Radio Music Awards and the 2021 Female Artist of the Year award at the Texas Country Music Awards.

In defamation lawsuit against Beto O’Rourke, lawyers debate whether Kelcy Warren is a public figure

10 questions to ask before signing a carbon credit contract