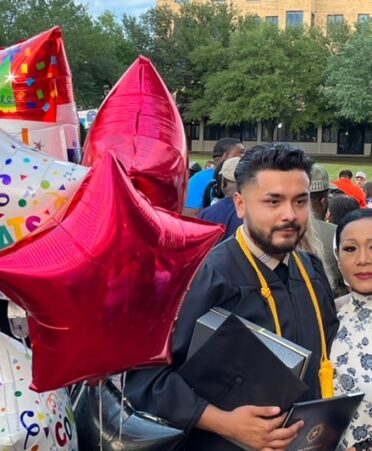 “It’s great to see so many youngsters train and be eager to join the Texas workforce and good to see so many families here to show support for their achievements,” he said.

“While carrying top-notch grades and working full time to support his family, he assisted other students in achieving their dream by hosting study groups, loaning others needed tools to further their in-class experience, and topped off those efforts by playing industry matchmaker and helping three other students gain significant employment while they too were completing their studies,” Day said about Tucker.

Alexander Aguilar, of Longview, received a certificate of completion in Diesel Equipment Technology – Off-Highway Equipment Specialization. He began work two months ago as a technician at HOLT CAT in Longview.

“The instructors really got me through it,” Aguilar said. “I graduated because of them.”

Aguilar said his parents, aunts, uncles and work supervisors watched him walk across the stage. Since he has to go back to work on Friday, he will celebrate with his family this weekend.

Alvin Skipworth, of Brownsboro, received a certificate of completion in Electrical Lineworker and Management Technology. He will start work in early September as an electrical lineworker apprentice  at Oncor in Sulphur Springs.

“I really enjoy working with my hands and helping people,” he said.

Skipworth said his parents and girlfriend were in attendance to watch him graduate. He said he was being taken out to eat after the ceremony.

Emmanuel Leyva, of Mount Pleasant, received a certificate of completion in Electrical Lineworker and Management Technology, He will soon start work as a ground hand at Orbital Power Inc. in Irving.

“I’m excited and nervous and a little scared,” he said with a laugh.

Leyva said he was appreciative of what his program’s instructors did to support himself and other students.

“There were some hard days, but we had fun,” he said.

For more information, go to tstc.edu.