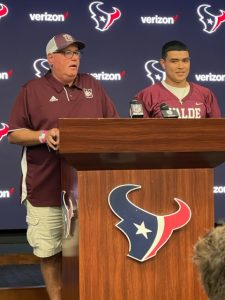 Almost everyone in the United States knows all about the horrific assassin attack at the Uvalde, Texas Elementary school where 19 students and 2 teachers were murdered in their class.  It has been a tough time for the Southwest Texas team but they are beginning to put their lives back together.

The Uvalde Coyotes football team has been a big part of the healing, and they got some unexpected attention over the last couple of weeks.  They played their first game of the season last week and came from behind at the eleventh hour to secure the win and give the town something positive to build back on.

Cal McNair representing the Houston Texans ownership and Coach Lovie Smith and several Texans players made a visit to Uvalde to show support for the town and the team.  Additionally, the Texans informed the team that they and their head coach would be flown to Houston for the Texans-Colts opening game on Sunday, September 11th and they would be provided free tickets and food and beverages.

One hour prior to kickoff of the game, Head Coach Wade Miller and #21 Justyn Rendon met with media representatives in the Team Auditorium to answer questions.  Rendon was chosen to represent the team because he wore #21, the number of people killed in the attack.

Miller was asked his thoughts on the experience the Texans provided to the Coyotes.

“Just to see my guys’ faces, a lot of these guys have probably never been to an NFL game and probably won’t ever go to another one, but to see their faces when they got to walk in and go up in the suite, no words!”

“As far as the 21 (who lost their lives), it’s important to us.  We all either lost somebody or knew somebody.  I’ve not been there very long.  We’re like the rest of the world; we just want to help in some way.”

Rendon was asked what it was like to come out and enjoy something positive after having endured such a terrible tragedy in their town.

There is no doubt that it will take a long time for the City of Uvalde and its residents to heal, but thanks to the Houston Texans’ generosity, the football team began to heal and they can pass the healing on to others in their town.

Great job, Texans!  You exhibit what everyone on the planet needs to do.  You TRULY care about others!