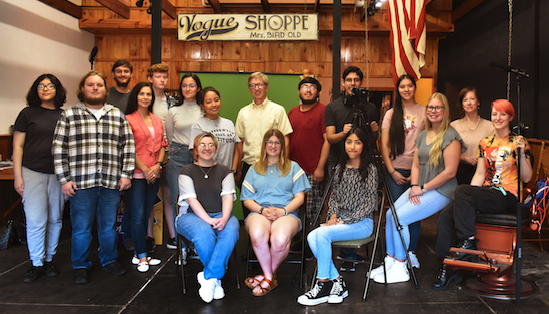 For the students of Honors Northeast involved in this year’s film effort, the days of 8-12 August represented an unprecedented challenge to adopt the methods of a film company.  Suddenly, Skylar Fondren, a prize-winning presenter in honors, and avid writer for the NTCC Eagle, found herself attempting to galvanize a cast and a crew to complete fifty-six scenes of a script she co-composed. Suddenly, Monse Rivero, an incoming honors student, and assistant director, found herself trying to figure the singular calculus of filming which must take scene, actors, time, makeup, props, and other variables into account in order the sequence the production judiciously.  Then there was Luis Olvera, who had never served as a cinematographer before, learning the ropes from sophomore, Raul Leija. Or Victoria Matiz wondering why the audio had gone dead, and sophomore Evan Sears finally deducing that a boom mic itself was not working.

It was neither a class in cinema, nor a club activity, but an attempt of NTCC honors students to create a feature-length film from scratch.  The exercise, which is part honors indoctrination, and part, public service, has yielded results in the past thanks to the anomalous way the State of Texas encourages collegiate history projects.  The NTCC Webb Society which is roughly coterminous with Honors Northeast, is part of a larger state society that is the collegiate auxiliary of the Texas State Historical Association.  The NTCC Webb-Honors cinema teams, pursuing feature-length films on Texas legends, have racked up four Caldwell Awards over the years, as the best history projects produced by any collegiate or university group in the state, and three Webb Chapter Awards, a citation of excellence among two-year schools. They have also featured their film at the national level in panels of the National Collegiate Honors Council, eight times.  Once more this past summer, thanks to the input of the donors of Honors Northeast, and particularly Jerald and Mary Lou Mowery, the NTCC team tried their best.

The story this year reflected the fact that the women of Honors Northeast wanted something diametrically opposed to last year’s film on the emissary of the muscle car, Carroll Shelby.  The theme of the Texas suffragettes from 1915-20, certainly swung the spotlight over more toward the lives of women.  It also proved intriguing on its own accord.  The tale of the Texas suffragettes, as developed by NTCC scholars who researched the topic at the University of Houston earlier this summer, was a story of intricate, indirect politics. The voters of the state of Texas—all male in 1919–never granted the vote to women outright.  But women nevertheless gained the vote in Texas.  In fact, the Texas suffragettes even made Texas a bellwether state for suffrage among the states of the former Confederacy. At the helm of the movement in Texas, Minnie Fisher Cunningham, a former pioneer woman pharmacist, found herself continually trying to satisfy the liberal wing of the Democratic party, hoping they would return the favor.  In the end the Texas suffragettes won an impressive victory with the Texas legislature which passed the Nineteenth Amendment—even as the voters opposed the state suffrage referendum. Cunningham thus led an impressive organization that destroyed the conservative unanimity of the other former Confederate states, and made Texas the ninth state in the union to ratify the Nineteenth Amendment.

The group in Fredericksburg at the “Little Acorn”
Sunday House

The film effort this year–which could mark the eleventh feature-length production in as many years–saw many firsts.  No student has so dominated the writing of the script as did this year’s Texas Heritage National Bank Scholar, Skylar Fondren.  The journalist major had a special vision that Minnie Fisher Cunningham should tell the story, and that it should be her story. Perhaps no other film has received such a talented actress from the community as this year’s effort.  Dr. Maryna Otero from the High School had a galvanizing effect on the cast playing the role of the original Texas suffragette, Annette Finnigan.  Crew and cast also traveled further to finish the filming.  Without the Director of Title V, Erika Garza agreeing to drive, and honors alumna, Ann Goodson, driving a pickup truck with a coat rack separately on her own accord, it is difficult to conceive how the group could have made it to the old homes of Fredericksburg, Texas for their “historic” cover.  The visuals, and especially the costumes, meticulously laundered and sewed by honors alumna, Ann Goodson, and assisted by this year’s Winkle Scholar, Hope Kelly, were exemplary.  The troupe also owed a debt of gratitude to Theatre Northeast, and Director Page Petrucka for their generous assistance in the realm of costumes.

Alas, for many reasons, the filming also encountered snags this year.  Honors student directors of the past like Brian Ramirez, Jordan Whelchel, Brenda Godoy, and Kayleah Cumpian assembled a coterie of top actors and assistants who pushed through the filming with a velocity of a soap opera, something necessary given the ambitions of fifty-something scene scripts.  This year Andante substituted for Allegro, and it remains to be determined whether Sam Pollan as producer, or the leaders can pull out some way to complete the story.  The culture shock of film production appeared more pronounced, and the team had trouble with rudimentary factors such as memorization, pronunciation, and blocking (adding action to a scene).

On the other hand, the filming is not finished even yet. Fondren just arranged for several scenes to be filmed in an old, picturesque Daingerfield home during the early half of September. No other film has had a director more meticulous and knowledgeable about camera work.  Fondren, who just placed first in NTCC’s 2022 Image Contest, has developed cinematographically as an aspiring journalist. Moreover, predictions about what scenes or what actors will look best on film are often erroneous.  Throughout the experience of the NTCC film series, scenes that appeared highly flawed often improved markedly as snippets of various takes were pulled together.  On the other hand, slam-dunk, one-shot scenes can sometimes have serious flaws.

Honors Director, Dr. Andrew Yox notes: “There are several serendipitous aspects about honors filming that are not for the weak of heart.  Valuable items can sometimes go missing, the specter of one person catching the flu can test the resolve of making large down-payments, and every new location taxes resources.  But the challenging nature of the experience also serves, I believe, as a memorable learning experience. Students learn in a rather dramatic and personal way, the value of high-fidelity recall, the fun of putting emotion into their discourse, showing initiative, and of collegiate teamwork. The exercise has served to provide a windfall of résumé citations for our students. Beyond this, our excursions in niche cinema—filming the un-filmed legends of Texas—promotes a patriotism and a novel awareness for the distinctive aspects of our state.”

The NTCC film series has also remained beholden over the years to Jerald and Mary Lou Mowery of Mount Vernon for their row of contributions and encouragement, the Whatley Employee Enhancement Fund, the patrons of Honors Northeast, and quick and creative decisions made by the staff, and business office of NTCC.

As with previous years, the NTCC group hopes to have a trailer by October, and the premiere by March of 2023.

In Central Texas, an urban tree canopy bends to the ice