The girls will also be 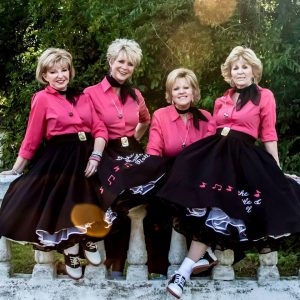 back up vocals for #1 Elvis ETA in the world Travis Powell.

From hula-hooping to hoop skirts, the 1950s and 60s often evoke fond memories of a more innocent time. Those halcyon days of long ago, when there were no loops, no layering, and definitely no autotune. If only there were a way to relive the excitement of real voices and real performers ….

Enter the four blonde bombshells of Shake, Rattle and Roll.

These internationally known, award-winning ladies will quickly have you dancing and laughing and loving the music of an era gone by.

Comprised of band leader Tavie Spivey, her sister LeAnn Bemis, avowed funny girl Brenda Spencer, and relative newcomer Debi Comis, the band is on a mission to bring the fun of the 50s and 60s to both those who were there, and those who came after.

“It’s a real family show,” says Bemis, “People bring their kids and grandkids to the show; we cater to those people.”

Achieving the level of success that the band currently enjoys did not happen by magic, though.

Tavie Spivey was freshly retired from 27 years in the army and had always wanted to have an all-female show group. She had begun singing when she was 15, and quickly discovered that she could make more money singing on weekends than she could in a whole week at work.

Spivey’s husband, Tom, was getting ready to call it a day as well, and entertainment was needed for his retirement party.

Bemis recalls the event. “They wanted her to bring entertainment for the show, and it ended up being just me and her. We didn’t have a group so we had to put a group together.”

“It went well and the phone started ringing.”

The group has been together for 16 years now, and although Spivey admits it was a bit difficult to find the perfect blend of harmonies and personalities for the show, she says “things are trucking, comin’ back and we’ve got a lot of people interested.”

Spivey relates, “We do male and female so it’s not all just women’s songs.” She describes some of the stars that they pay tribute to, “Roy Orbison, the Four Seasons, Elvis … we do everything from Lollipop to Little Darlin’!”

“A big draw on our show,” adds Spivey, “is that we get the audience involved with us, we do singalongs, and we’ve got some gals who love to work the harmonies!”

Bemis notes, “We’re there to have fun and love entertaining other people to make sure they have fun. Our show isn’t just singing, it’s a show.” She adds, “We have choreography, jokes, we go out into the audience; we try to get everyone involved. It really is an interactive show.”

As it happens, all four members of the group used to sing gospel, and that love of music and harmony shines through whenever they perform.

While some of the support from their husbands is more of the cheering from backstage kind, Spivey’s husband, Tom, is actually their sound engineer, and Bemis’ husband, Doug, handles their merchandise sales, photography, and security.

“So many of the fans follow us from show to show,” says Bemis, “they’re almost like friends, they call out from the audience and say ‘we’re here, we’re here!’’

“It’s really neat,” she adds, “We’ve (also) become friends with the bands and other entertainers we work with.”

In addition to the satisfaction of winning awards (including a recording contract at a doo-wop contest in Las Vegas, and “Vocal Group of the Year” by Valley Star Awards), it’s the love of the music that keeps them working hard to continue to hone their skills and bring their show to as many fans as possible.

As Bemis says, “We’re excited about returning to Gilmer!

“I think my favorite thing is the friendship that the four ladies and I have together, and we love entertaining other people; we’ve been together so long it’s almost like we’re sisters!”

Truly a family effort and a fun, family oriented production, Shake, Rattle and Roll will be performing at the Gilmer Civic Center Nov 5th 6:00 pm. Call (832) 312-0074 for tickets and/or more information.