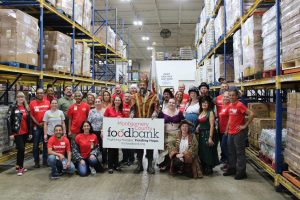 “The King believes that it’s important for the Kingdom to support the surrounding community” says Carl Foy, Marketing Director for Texas Renaissance Festival.  “The need for support from food banks is on the rise.  We felt that doing a road trip, broadcasting their message at each stop and telling the story of the Food Banks, it’s volunteers, and key partners in the community is very meaningful.”

Tour number two will take the King and his court to Galveston, where there will be another four tour stops.  First stop is Moody Gardens, at noon, where they are collecting food donations and discounting admission.  Next, at 2pm is the Galveston County Food Bank in Texas City.  Lagoonfest Texas in Texas City will be the third stop at 4pm.  The tour will conclude at Haak Winery in Santa Fe, with a Ren Fest styled celebration, all benefiting the Food Bank.  Donations for this tour can be made at any tour stop, or online at https://www.galvestoncountyfoodbank.org/donation-now/

For more information about the Texas Renaissance Festival, including admission to the festival and camping options, please visit www.texrenfest.com.

The Texas Renaissance Festival is the nation’s largest and most acclaimed Renaissance themed event. Established in 1974, the event attracts over half a million visitors each year to its 55-acre New Market Village and Fields of New Market Campgrounds in Todd Mission, Texas. This immersive experience features world renowned live entertainment works by master artists and craftspeople, award winning food and drink, hand-powered rides, and games, and over 100 interactive characters during its eight themed weekends from October 8 through November 27, 2022.