The Houston Texans entertained the San Francisco 49ers at NRG Stadium in Houston Thursday night as the preseason drew to a close.  Both teams came in a 2-0 on the preseason. 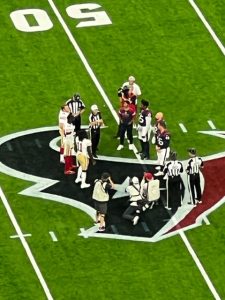 Houston won the coin toss and elected to defer to the second half.  After a return of a Matt Ammendola kickoff the Niners set up shop on their 19.  San Fran picked up one first down but they were forced to punt the ball away from their 44 on the second series.  After a Mitch Wishnowsky 41-yard punt Houston went on offense for the first time at their 15 with starting quarterback Davis Mills under center.

Mills led his unit the 85 yards into the end zone in 11 plays that took 5:12 off the clock.  The score came with 7:33 left in the first quarter.  Ammendola added the PAT and Houston took a 7-0 lead.

The Niners began their second drive on their 23 after a return of Ammendola’s kickoff.  After a 7-yard sack on first down San Francisco had a quick three-and-out and Houston appeared to be set to get the ball back but the defense was called for an illegal contact and after a 5-yard penalty the Niners were back in business.  The Texans defense rose to the occasion and forced a punt after 3 more plays.  The set back up on offense at their 24 after the kick.  They had a quick three-and-out.

Houston’s defenders took care of business and the home team got the ball back at their 15 nearing the end of the first half, giving Mills a chance to run the two minute offense.  It was much ado about nothing and Houston was forced to punt the ball back to the Niners.

The Texans did a great job defensively and the clock ran out on the first half with Houston leading 7-0 and set to get the ball to begin the second half.

Houston moved the ball down the field thanks to a pass interference and a roughing the pass call against the Niners.  The drive ended with a   yard TD pass from Davis Mills to Chris Moore with 11:27 left in the third quarter.  Amendola added the extra point and Houston extended the lead to 14-.  The drive was 6 plays, 77 yards and took 3:33.

Houston forced a punt and the Texans got the ball back.  They drove down the field and Ammendola hit a 45-yard field goal with 1:58 left in the third quarter to extend the Houston lead to 17-0.  The drive was 10 plays, 53 yards and took 5:26 off the third quarter clock..

On the net possession San Francisco went for a 4th and 1 at their 29 and Sudfeld was stuffed at the line of scrimmage and Houston went back on the offensive with Kyle Allen at quarterback.

The Niners forced a 31-yard field goal attempt by Ammendola.  The kick was no good and San Fran took over at their 21 with 12:56 left in the game.

The teams exchanged punts the rest of the way and when the final gun sounded Houston had completed a perfect 3-0 preseason record.

When Coach Lovie Smith faced the media after the game he was obviously pleased with the way his team played not only in this game but throughout the preseason.  The win capped the first undefeated preseason since 2016 and only the second undefeated preseason in the team’s 20 years in the NFL.

“When we started training camp, there were so many questions. We had a plan of what we thought about our team, but we needed to play these games. We have a long way to go still. Whenever you keep score, of course, you want to score more points as often as you can. But we needed to finish tonight, and the plan was to play the guys a little bit more. I think offensively I know Davis (Mills) went all the way in. I think it’s important to come out, play the first half and then come out at least one series of the third quarter, which we were able to do. We’re a running football team. Offensively we have a good offensive line, even though we held a couple of our top-line players out. But running back wise, Dameon Pierce has been that way every time we’ve given him the ball. He’s a good football player. There’s some other good things we did on the offensive side of the football. Protecting the ball of course is important to us. Defensively, whenever you get a shut-out, that’s big. You’ve got to take the ball away. You’ve got to win that turnover ratio. There’s a lot of good things we did tonight.

Houston will open the season at home on September 11 when they host the Indianapolis Colts in a noon kickoff at NRG Stadium in Houston.  While preseason doesn’t mean a thing as far as the standings, Houston fans at least have hope for a good season in 2022.  Hopefully the team can deliver!