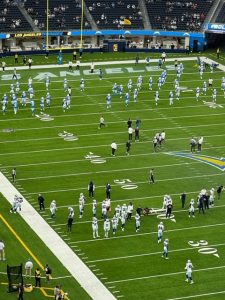 The Dallas Cowboys traveled to Los Angeles Saturday night to take on the Los Angeles Chargers in the second preseason game for both teams.  The Chargers lost a week earlier by the score of 29-22 to the Los Angeles Rams and the Cowboys lost to the Denver Broncos 17-7, giving both teams an 0-1 record in preseason play.

Interestingly enough, even though the Rams and Chargers play in the same stadium the Chargers don’t have a lot of support in the City of Angels.  Their San Diego fans pretty much abandoned them when they left San Diego.  As a result, when the Cowboys entered the field they had a roar of cheers, much as if they were playing a home game.

In a strange occurrence, the video board and scoreboards and all the boards around the stadium went out.  The only things working were the time and the 40-second clocks in the end zones.  According to an official we talked to in the press box the routing system went down and the whole system has to be rebooted.  About 35 minutes later the digital signage began to come back on but the entire system was not completely functional until 11:38 left in the third quarter.  .

The Chargers won the coin toss and elected to receive.  Brett Maher kicked the ball away to begin the game.  The kick traveled into and out of the end zone and after a touchback the Chargers began play on offense at their 2 and 5.

Backup quarterback Easton Stick started under center as play began.  An off sides on 3rd and 5 gave LA a first down and continued the drive.  Two plays later Israel Mukuamu intercepted Stick at the Dallas 37 and Cooper Rush came out to lead the Dallas offense.

They managed to pick up one first down and then Bryan Anger came in to punt the ball away.  The kick went into the end zone and the Chargers went back on offense at their 20.

Stick took advantage of a Cowboys defense that struggled for the second straight game with most of the starters not making an appearance.  The drive ended when Dustin Hopkins came in and booted a 22-yard field goal with 6:17 left in the first quarter, giving the Bolts the early 3-0 lead.  The drive was 4 plays, 76 yards and took 4:21.

On the ensuing kickoff wide receiver KaVontae Turpin who was back deep to return the kick took the ensuing Hopkins kickoff at his 2 and returned it 98 yards into the end zone for a Dallas TD.  Maher nailed the PAT and Dallas took a 7-3 lead.  The score took just 12 seconds off the clock.

Maher kicked the ball out of the end zone, but the Cowboys were called for an illegal formation on the kick and the ball was moved back to the 30, setting up a re-kick.  LA came up on the short end of the stick on the re-kick as the returner was downed at his 18.

Stick led his team down the field and into the end zone for their first TD with 14:14 left in the first half of play.  The score came on an 18-yard run by Joshua Palmer.  James McCourt came on and added the extra point and the Chargers led 10-9.  The drive was 12 plays, 82 yards and took 6:51.

McCourt kick off after the TD and Malik Davis took the ball back to his 31.  Rush remained at quarterback on the next possession for Dallas and led the offense into the end zone.  The score came on a 1-yard run by Rico Dowdle with 8:18 left in the half.  The Cowboys chose to go for a 2-point conversion.  The try was good when Rush hit Jake Ferguson, giving the ‘Boys a 15-10 lead.  The drive was 12 plays, 69 yards and took 5:56 off the clock.

Maher kicked the ball away once again and it went out of the end zone, resulting in LA setting up on their 25 once again.  The Dallas defense got the job done, forcing a three-and-out.  Following a punt and 10-yard penalty against the Cowboys for holding, the Cowboys began their net drive at their 8.

Will Grier came in to replace Rush at quarterback on the possession.  After moving the ball down to the LA 49 Anger punted the ball away to Michael Bandy who fair caught the ball at the Chargers 19 where the home team took over with 2:30 left in the first half.

Stick remained in a qb for the 2-minute offensive drive.  They picked up one first down due to a 5-yard defensive pentalty before JK Scott punted the ball away.  Turpin took the ball at his 14 and returned it 86 yards into the end zone for his second TD return of the evening, the first coming on a kickoff.  The score came with 52 seconds left in the half.  Hajrullahu hit the extra point and the Dallas lead advanced to 22-10.

After yet another touchback Stick was hit hard and fumbled the ball away and Trysten Hill recovered the pigskin for Dallas at the Charger 15 with 46 seconds left in the half.  Grier remained in a quarterback.

The offense got into the end zone again when Malik Davis ran into the end zone from the 1 with 23 seconds left in the half.  Maher kicked the point after and the Dallas lead moved to 29-10    The drive was 4 plays, 15 yards and took just 23 seconds.

Maher drove the ball out of the end zone again and Stick brought his unit out at the 25 and took a knee ending the first half in a game dominated by Dallas.

With all of the substitutions by both teams after halftime, the third quarter turned into a defensive battle.  There wasn’t a score in the third quarter, so the score remained 29-10 in favor of Dallas going into the final stanza.

Dallas padded the lead when Hajrullahu booted a 35-yard field goal with 12:14 left in the game, putting Dallas up 32-yard field goal to cap off a 9-play, 57-yard drive that took 4:22 off the clock.

Ben DiNucci came in on the next Dallas possession with just over 10 minutes in the game to show what he could do at the helm.  LA didn’t allow a first down but Mike McCarthy chose to let Maher attempt a 61-yard field goal.  The kick was right down the middle but fell just short of making it over the crossbar, leaving the score at 32-10 with 8:33 left in the game.

The Chargers got one more TD in cleanup time when many players who most likely won’t be on the team when the final cuts are made were in the game.  The TD came with just 1:27 left in the game, capping off a drive of 12 plays, 58 yards and consuming 3:17.  The score came on a 1-yard pass from Chase Daniels to Michael Bandy.  A try for a 2-point conversion was good when Daniel hit Gabe Nabers, moving the score to 32-18 in favor of Dallas.  Interestingly enough, the victory was the FIRST preseason win for Mike McCarthy as a head coach.

The Cowboys ran off the final 1:27 and moved their preseason record to 1-1.  The final preseason game will be on Friday, August 26th when they entertain the Seattle Seahawks at AT&T Stadium in Arlington.

We asked Coach McCarthy in his postgame presser if he felt he saw what he needed to see of the younger players in order to make the cuts down to the final 53-man roster.

“Oh it’s huge.  We’re not looking forward to it.  We know it’s going to be very difficult and it’s going to be extremely competitive, and that’s what you want on your football team and we felt that way when we put the 80-man roster together.  We sat 25+ players tonight and gave it to our young guys.  We’re just trying to get these young guys as many reps as possible.  This is what your draft and develop looks like, so this is our process.”

Once the preseason is over Dallas will have 16 days to get ready to open the season when they host Tom Brady and the Tampa Bay Buccaneers.