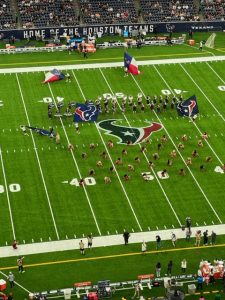 The Houston Texans opened their 2022 NFL preseason at home at NRG Stadium in Houston Saturday night.  Both teams entered the game with new head coaches for 2022, as Brian Allen replaced the retired long time head coach Sean Peyton in New Orleans and Lovie Smith took over the reins in Houston.

Smith had said earlier in the week that his plan was to play his starters for a bit at the start of the game.  He indicated he had a play count but did not disclose that the count was for the starters.  With the league dropping down to three preseason games in 2021 in is now even more critical to see a lot of the rookies on the teams in order to make the necessary cuts before the regular season begins.

New Orleans won the coin toss to begin the game and deferred to the second half, giving Houston the ball first.

John Parker Romo kicked the ball away to Tremon Smith who returned the ball from just outside the goal line to the 26 where Davis Mills and the offense went to work for the first time in game action in the preseason.  The teams managed only 4 yards on three plays before Cameron Johnston punted away from his 30 to the Saints 25.  The kick was returned 8 yards to the 33 by Easop Winston, Jr.

Andy Dalton began at quarterback for the Saints. He methodically led his unit down the field 67 yards into the end zone for a TD and the first points of the game.  The score came on a 9-yard TD pass with 7:48 left in the opening frame.  The drive was 10 plays and took 5:22 off the first quarter clock.

Houston got the ball back after the score and went three-and-out for a second time and following a Johnston 57-yard punt and a 9-yard return New Orleans set up on their 21.

After picking up one first down Tremon Smith intercepted an errant Ian Book pass at the Saints 46 and Houston took over at the 34 following a 12-yard return.  Jeff Driskel came in at quarterback for the Texans as they began their third drive of the game.

Following an offensive pass interference call against Houston, although they couldn’t recover, the did manage to gain 3 net yards and Ka’imi Fairbairn came in and kicked a 49-yard field goal with 1:20 left in the opening quarter to cut the New Orleans lead to 7-3.  The drive was 4 yards, 3 pays and took 1:31 off the clock.

The Saints fumbled the ball away to the Texans at the New Orleans 47 and the home team was back in business. 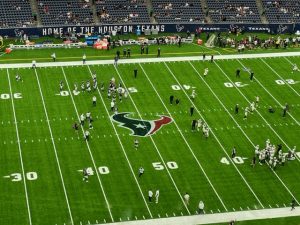 Houston took advantage of the turnover and Driskel led the offense into the end zone for their first TD of preseason.  The score came following a 5-play, 47-yard drive that took 2:41 when Driskel hit Jalen Camp with 11:50 left in the first half of play.  Fairbairn added the PAT and the Texans led 10-7.

After forcing a Saints punt, Driskel was moving the offense down the field again but a tipped pass by intended receiver Dameon Pierce was picked off by Chase Hansen and returned 44 yards down to the Houston 42 with just under six minutes left in the first half.

Houston got the ball back at their 26 but went three-and-out.  Following a 65-yard Johnston punt New Orleans set up on their 15 with 52 seconds left in the half.  The defenders in for Houston knocked the Saints back to their 1 in three plays, forcing a punt.  Tremon Smith returned the kick down to the NO 38 and Houston had 21 seconds to try to break the tie.  Things didn’t go well, as the Texans were called for an offensive pass interference with 7 seconds left in the half.  A pass traveled down to the Saints 41 and with 2 seconds left in the half Fairbairn attempted a 59-yard field goal.  The kick was wide right and the half ended with the teams tied at 10-10.

As is expected in a preseason game, the second half tends to become boring with many bubble players and players who won’t make the final roster cuts seeing extended playing time.  That was the case Saturday night, as the third quarters was punt after punt until New Orleans intercepted a pass at their 45 with 1:27 left in the third quarter.

The Saints got the ball back after Houston was forced to punt and Book began what looked like would be another scoring drive for his unit.  They moved the ball down to the Houston 2 before fumbling the ball away to Houston’s Fabian Moreau with 5:51 left in the game.

Driskel threw an intereption on the possession to the Saints at their 40 with 4:10 left in the game and New Orleans went back on the offensive again.  Houston’s defense held and after a punt the Texans got one last chance for victory beginning at their 10 yard line with 2:15 left in the game.

Driskel led the Texans down the field and on a 3rd and goal from the New Orleans 6 he hit Johnny Johnson, III for a TD with 25 seconds left in the game to put Houston up 16-13.  Fairbairn added the extra point and the lead moved to 17-13.  The impressive drive was 7 plays, 90 yards and took 1:50.

New Orleans was called for a holding penalty on the return and following the mark off they began at their 9 with 20 seconds left in the game.  Book was sacked back at the 2 and the clock expired and Houston walked off with the 17-13 win.

When Coach Lovie Smith held his post-game press conference we asked him how big a boost it was for the Texans to come back and find a way to win the game in the final seconds.

“Any time you play to score and want to win, so to be able to do that whenever you have a chance and you find a way to put it together.  We had some adversity, turned it over a few times and they were able to put a few drives together, but how the guys finished has to give us a boost heading to who we play next week, they’re the World Champions or something like that, so we need to be at our best when we go out there.”

The Texans will travel to Los Angeles on Friday, August 19th to take on the Rams at SoFi Stadium.  The Mirror will be in LA to cover the game.  Hopefully, as the starters will get more playing time, they can build on the victory over the Saints and continue to develop a winning attitude. 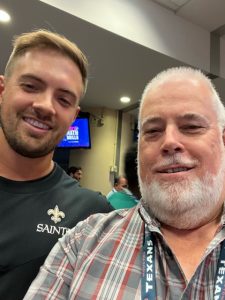 JORDAN TRAYLOR, left, pictured with Elwyn Henderson at halftime of the preseason game between Traylor’s New Orleans Saints and the Houston Texans at NRG Stadium in Houston Saturday night.

Jordan Traylor enters his fourth NFL season, his second in coaching as a defensive assistant with the New Orleans Saints. During his first two seasons in New Orleans, Traylor served as a scouting assistant.

The Gilmer, Texas native, who played quarterback and wide receiver in high school, started his collegiate playing career at Mississippi College from 2012-13, before transferring to play quarterback at Texas A&M from 2014-15, where he was a Southeastern Conference All-Academic selection. Traylor is the son of University of Texas San Antonio Coach Jeff Traylor.