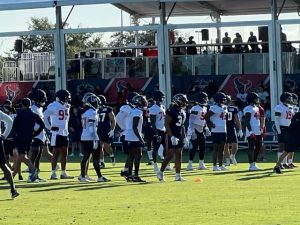 In April of this year I had the opportunity of covering my first NFL Draft in Las Vegas, Nevada.  That was a very enlightening and exciting time for me and I wrote a story about that experience earlier this year.

On Friday, July 29th, I had the opportunity to cover my first NFL Training Camp when the Houston Texans began preparation for the 2022 season and it was also very enlightening.

I enjoyed watching the intensity of the athletes as they attempted to make plays as if they were playing in a regular season game with victory hanging out there for them to snatch.  They were sweating profusely and taking frequent Gatorade and water breaks, but every single man on the field gave it everything they had.  Many of them knew that this might be their one and only big chance to make it in the NFL and they were focused and giving everything they had within themselves to impress their position coaches and their head coach.

The experience was elevated even higher getting to see Head Coach Lovie Smith as he talked with the media after the practice.  You could see his excitement about the challenges in front of him and it was clearly visible just how much he loves the game of football and being a head coach and the opportunity he has been given once again to be one of 32 men who are head coaches in the NFL.  It shows on his face that he is like a young child in a candy store who can’t wait to get started with the season.

Everyone knows that the team is in rebuilding mode, but the exuberance of Coach Smith is definitely a spark that could possibly spark a fire with the Houston fans who are begging to have a good team once again that can make a deep playoff run.  If that spark starts a fire, the Texans just might be able to surprise the whole NFL and have a decent season.  Even if that doesn’t happen, you can sense that Smith will field a competitive team that should be in every game the play in 2022. 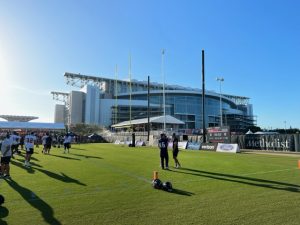 It will be fun to watch as the season unfolds just how things will turn out.  Now that I have had the opportunity to see how an NFL team prepares for the season and sets their goals, I can hardly wait to see how it all unfolds.  Let the 2022 season begin!

Today’s scrimmage vs. Pine Tree will be Live Streamed on YouTube