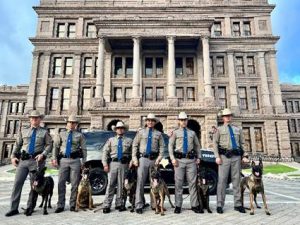 AUSTIN – The Texas Department of Public Safety (DPS) graduated six new K-9 teams earlier this month, as the inaugural class for the Texas Highway Patrol Canine Tracking Operations Program. These teams will be strategically located in the border regions to track individuals who may otherwise not be found.

“This is yet another step in increasing our efforts to secure our southern border,” said DPS Director Steven McCraw. “K-9 units have long played an integral role within DPS and we know these newly graduated teams will have a positive impact not only in the areas they serve, but really in keeping all Texans safe.”

Each of the six K-9 teams completed a rigorous five-week training program conducted by DPS in conjunction with Pacesetter K9, LLC.  The training focused on human tracking across a variety of terrains over long distances. In all, the handlers and their canine partners ran approximately 700 tracks during the training in order to prepare them for their new roles.  Handlers also learned canine health awareness and medical care techniques to ensure the safety of their canine partners while in harsh environments.

The graduating breeds include three Dutch Shepherds and three Belgian Malinois. The new teams will be stationed in Laredo, Del Rio, Uvalde and Hebbronville.