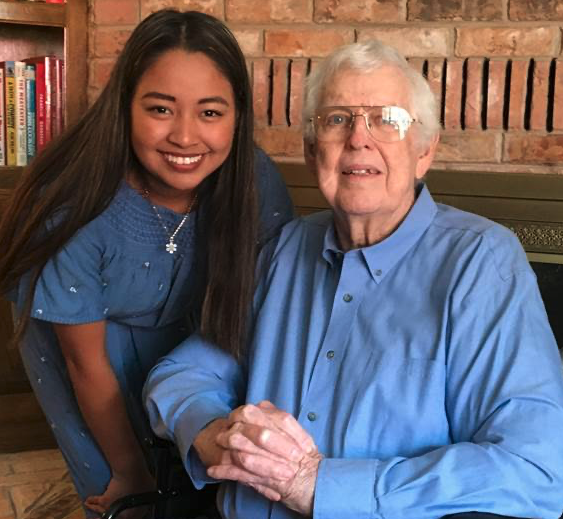 She is already studying for the fall semester.  Her professor has approved her upcoming topic in Texas history.  This Friday, she plans to attend a dinner for those students in Honors Northeastinterested in being a part of this year’s film on Texas Suffragette, Minnie Fisher Cunningham.

Monserrat Rivero, known by her friends as “Monse,” has a coloratura tone to her voice, and a ready smile as she first meets two sophomores, Victor Diaz, and Raul Leija, in the new study wing the NTCC Humanities building.  Her look is a little more unassuming than one might guess, given her academic achievements. Rivero notes: “I am so grateful for the opportunities and help I have already received at NTCC.”

Rivero began her High School years in Mount Pleasant with a disadvantage.  She was unable to maintain a conversation in English. With her family still in Mexico, Rivero, as a sixteen-year-old, emigrated to the United States for a better education. She spent her first year at the high school in a self-contained classroom, learning English via the Newcomers Program, under Landon Johnson.

By her sophomore year, she was ready, as she now notes, “to sink or swim.”  Often, she had to ask her fellow students with help translating a few words or phrases uttered by a teacher.  She readily became interested in afterschool activities, not only to learn English faster, but because she felt a need to give back to the community that was giving her a chance.  As a member of HOSA, for future health professionals, she began her first volunteer work.  By her senior year, her volunteer work had escalated to a 200-hour stint with a community-service project she initiated called “Mi CASA es tu CASA.” Rivero organized and collected thousands of donations made through regional classrooms, and distributed them to children in the local foster care system. For this service she was invited to the stage of the plenary meeting of the Texas Association of Secondary School Principals (TASSP) this past June in Austin.  She was one of five students in Texas to win a Teens Serving Texas Award of the TASSP. 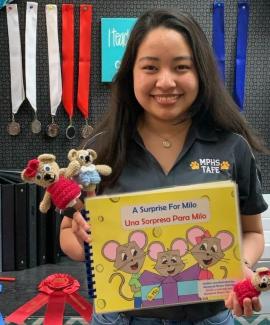 Rivero also advanced toward a goal she articulated in her junior year to obtain a Master of Arts in Multilingual and Multicultural Education, and to make an impact as a future educator. An active member and competitor in the Texas Association of Future Educators (TAFE), she became the president of the association’s area six, and then TAFE Student of the Year while a junior. As a senior, she was a national qualifier in TAFE, writing the children’s book, “A Surprise for Milo,” in both English and Spanish, and then narrating the story in both languages in a vodcast using puppets. Not too surprisingly, she won the academic blanket at Mount Pleasant High School for Education and Academic Training in her senior year.

Honors Director, Dr. Andrew Yox, notes “we are excited to have Monse at NTCC and in honors.  Because of her interest in education, we were able to have her visit a well-known local educator who has since retired, Dr. Jerry Wesson, in his home in Mount Pleasant. The two had a very pleasant conversation, with Dr. Wesson telling the story of the college course he developed for El Centro that eventually enrolled one-half-million students, and Monserrat showing Dr. Wesson a recent video of her activities.”

Rivero will be taking a full-course load at NTCC in the fall, and hopes to find ways to be an active member of campus life.