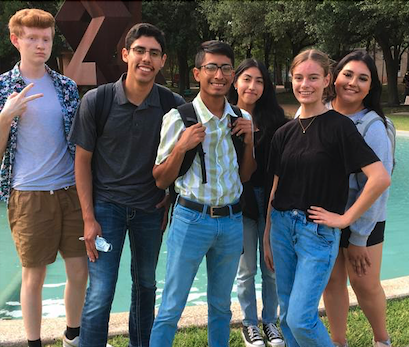 In early June, Honors Northeast students returned from a three-day trip to the special collections department of the University of Houston M.D. Anderson Library. Their goal was to learn as much as they could about the story of how women gained the right to vote in Texas, 1915-20. As with similar efforts at archival research pursued by NTCC honors students for the last ten years, the ultimate aim is to convert this research into a feature-length film on a Texas legend.

The honors team enjoyed remarkable access to the voluminous files of Minnie Fisher Cunningham, the president of the Texas Equal Suffrage Association during those years.  Christian D. Kelleher, the director of Special Collections and the Emily Scott Evans Endowed Library Professor at the University of Houston engaged many assistants to help guide the NTCC students through the research, and oversee the use of century-old materials.

The research team found a number of surprises: the lackluster effort of the poorly led women of Northeast Texas to obtain the suffrage; the special friendships that emerged between Cunningham and a younger Maryland volunteer, Lavinia Engle, as well as the national leader, Carrie Catt; the maddening way in which pro-suffrage males such as Governor Hobby attempted to use the movement for their own ends; and the effort of many Texas women, as with the Equal Rights Amendment controversy later in the 1970s, to oppose a feminist movement.

The bottom line, however, was that Cunningham led Texas to become the first Southern state to ratify the amendment.  With the other Southern states except Arkansas opposed, the Texas victory in 1920 galvanized the whole suffrage movement early on, leading to the passage of the Nineteenth Amendment.”

Honors Director, Dr. Andrew Yox notes, “we were especially pleased this year by the exceptional facilities provided for us by Mr. Kelleher at the University of Houston, and by the student response.  Every student prepared a separate story based on their research which they presented on the way back to NTCC. With the combination of notes, our script team already has an 80-page draft of feature-film length.” 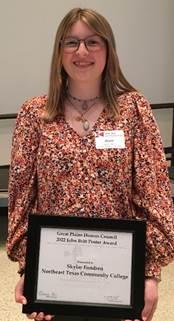 Sophomore Skylar Fondren (left), the winner this past year of McGraw Hill, and Britt awards, will direct this year’s film effort, and is also heavily involved in writing the script.  Anyone interested in becoming involved in this effort is welcome to contact Honors Director Yox at ayox@ntcc.edu.  The film project is again beholden to the institutional resources of Honors Northeast, a Whatley Employee Enhancement Fund grant, the special support of Jerald and Mary Lou Mowery, and other honors donors.

Past films in this series have included the stories of Carroll Shelby, Bo Pilgrim, Adina De Zavala, Barbara Conrad, Mary Kay, Sam Houston, and the Texas Cherokee, Ma and Pa Ferguson, Harriet Potter Ames, Wright Patman, and Morris Sheppard.  Four of the films have won state Caldwell Awards as the best project in Texas history pursued by any college or university group in Texas.  All past films of the series can be viewed on www.ntcc.edu/honorsfilms.