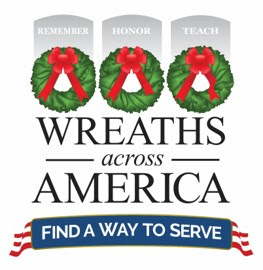 Wreaths Across America Kicks off its annual “Giving in July” campaign
by recognizing local volunteers giving back to their community.

COLUMBIA FALLS, Maine and Texas – July 5, 2022 – Throughout the month of July, national nonprofit Wreaths Across America (WAA) will be celebrating it’s annual Giving in July campaign. It is a month dedicated to recognizing the volunteer Sponsorship Groups and individuals who “give back” to their communities while helping to share the mission to Remember, Honor and Teach, all year long.

Through this national program, WAA has given more than $17 million in local contributions over the last 14 years and has helped support local charitable efforts that include helping living veterans, combating homelessness, and feeding those in need.

In Texas last year, the following local Sponsorship Groups ranked at the top in the state for their efforts to raise funds for local philanthropic efforts while raising wreath sponsorships for local service members laid to rest in their communities.

“I have long said it would be disingenuous for us as an organization whose mission is to Remember the fallen, Honor those that serve and their families, and Teach the next generation the value of freedom, if we do not support other like-minded programs doing just that in their communities,” said WAA Executive Director Karen Worcester. “Our Group Sponsorship Program is a year-round effort, but through Giving in July we hope to remind people that veterans and our current military service protect us 365 days a year and it is never too early to make a difference in your own community.”

Wreaths Across America is the non-profit organization best known for placing wreaths on veterans’ headstones at Arlington National Cemetery. However, in 2022, the organization placed more than 2.4 million sponsored veterans’ wreaths at 3,100 participating locations nationwide. Throughout the calendar year, you can tune in to Wreaths Across America Radio, 24/7, to learn more about the mission and those who support it across the country, as well as the hundreds of local charitable efforts nationwide that are funded through wreath sponsorships.

The organization’s mission – Remember, Honor, Teach – is carried out in part each year by coordinating wreath-laying ceremonies in December at Arlington, as well as at thousands of veterans’ cemeteries and other locations in all 50 states and beyond. This year, on Wreaths Across America Day, December 17th, 2022 more than 3,100 cemeteries will participate in National Wreaths Across America Day, including these locations in (state) (top five cemetery locations).

Since being formalized as a 501 (c)3 in 2007, WAA has partnered with hundreds of local charities, community programs, and civic groups throughout the country to remember and honor our nation’s veterans and active-duty military throughout the year. Giving in July celebrates these local “give back” efforts and highlights the opportunity to ‘do good twice’ through the sponsorship of veterans’ wreaths.

You can help a deserving group in your area by sponsoring a veteran’s wreath. Each $15 sponsorship goes toward a live, balsam wreath that will be placed on the headstone of an American hero as we endeavor to honor all veterans laid to rest at noon on Saturday, December 17, 2022, as part of National Wreaths Across America Day. To sponsor a wreath, go to www.wreathsacrossamerica.org and sponsor a wreath today. Click here to find a local participating cemetery near you.

About Wreaths Across America
Wreaths Across America is a 501(c)(3) nonprofit organization founded to continue and expand the annual wreath-laying ceremony at Arlington National Cemetery begun by Maine businessman Morrill Worcester in 1992. The organization’s mission – Remember, Honor, Teach – is carried out in part each year by coordinating wreath-laying ceremonies in December at Arlington, as well as at thousands of veterans’ cemeteries and other locations in all 50 states and beyond.

For more information or to sponsor a wreath please visit www.wreathsacrossamerica.org.