The hot conditions will pose an increased risk of heat-related illness to occur, particularly among those working or recreating outdoors, as well as residents without access to air conditioning.

AccuWeather Global Weather Center – July 5, 2022 – AccuWeather meteorologists expect temperatures to skyrocket across the Intermountain West heading into this weekend, with a few locales potentially reaching their hottest levels of the year thus far. 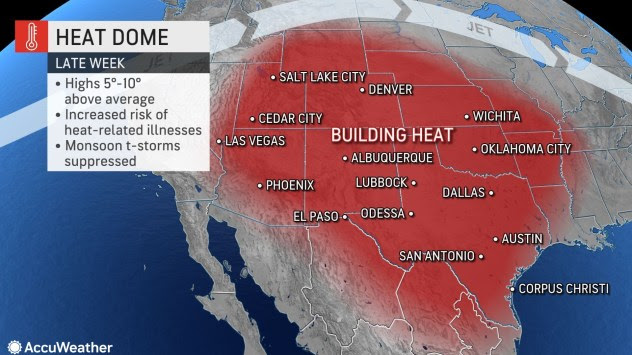 A northward shift in the jet stream will allow a ‘heat dome’ to build across much of the West and High Plains during the latter part of the week. Underneath these heat domes, the air sinks, causing temperatures to climb and precipitation and cloud cover to generally be limited.

Following a generally seasonable first part of the week, high temperatures in the 90s F are expected to surge as far north as Montana by the end of the week, with the deserts of the Southwest likely to eclipse the 110-degree Fahrenheit mark.

“By the upcoming weekend, highs could be around 105 in places such as Salt Lake City, which is 10-15 degrees above normal for this time of year and would eclipse the hottest day of the year they’ve had thus far, which was 102 back on June 12,” AccuWeather Senior Meteorologist Dan Pydynowski said.

Pydynowski added that the city’s daily record highs spanning July 8-10, could be challenged amid the building heat. These records range from 102 to 104.

Greg Abbott and Dan Patrick diverge ahead of the legislative session on property taxes, power grid