High temps in Phoenix could crack the 115-degree mark

AccuWeather Global Weather Center – June 7, 2022 – A scorching heat wave that will last for days is in the cards for the southwestern United States heading into the weekend. AccuWeather meteorologists say the weather pattern could set dozens of new daily records as temperatures soar to their highest levels yet this year, including in Phoenix, which could see the mercury soar above the 115-degree mark. 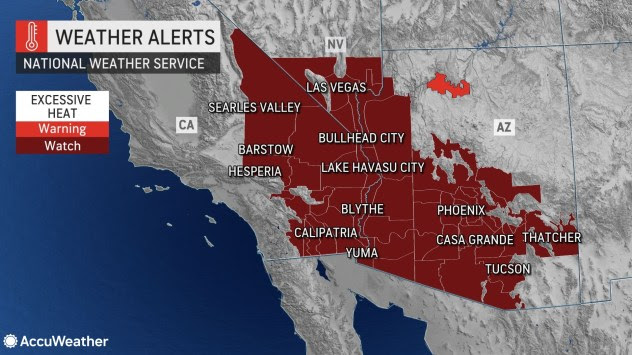 Excessive heat watches stretched from southeastern California to southern Nevada and central Arizona Tuesday ahead of the building heat. Las Vegas, Phoenix and Palm Springs, California, were included within these watches, signaling to residents the need to prepare now for the sizzling conditions. 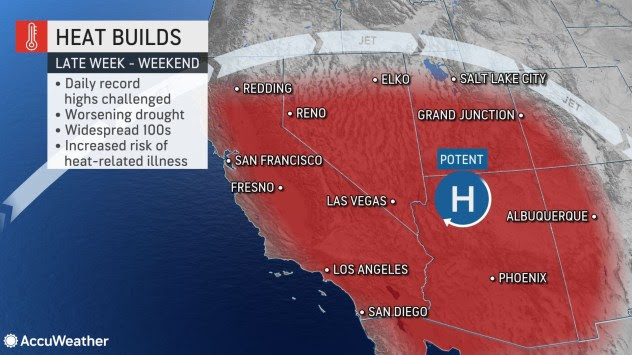 Daytime temperatures are predicted to top out 5-10 degrees Fahrenheit above normal late this week and into the weekend. The heat is likely to peak in most areas Friday and Saturday.

Although these temperature departures may seem far from extreme, forecasters say it’s important to keep in mind that average highs in the Desert Southwest are already in the upper 90s to middle 100s at this point in the year. That means this wave of heat will push temperatures into the upper 100s and 110s, levels that can be dangerous for even those who are accustomed to extreme heat.