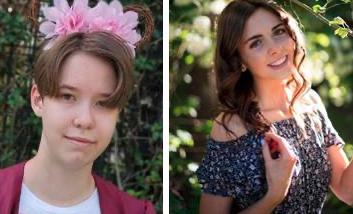 Three NTCC history students emerged on top in the 2021 Bonnie Spencer competition, for the best student essays in history.  Essays could have been entered from any history course from any history instructor, full-time or part-time, on campus or off, such as with embedded dual history classes.

Hannah Molandes won first place and $100 with an essay, “Social Work and Jane Addams: A Woman’s World.”  Caroline Ford won $50 and second place for her essay on “Slavery after the Civil War.” Stephanie Ornelas won third place and $25 for her essay on Frederick Douglass.

History Professor, James McGregor notes that “Hannah has been a terrific student for the past two semesters and her essay on Social Work is one the best student essays I’ve read in several years. I don’t generally see many “Bonnie Spencer worthy” essays from my classes but I knew this was one before I even finished reading it.”

Molandes is an art major. Second-place winner, Ford majors in Human Performance. She hopes to use her courses at NTCC to benefit “my dance and fitness journey. I hope to one day open my own dance studio and gym. I just completed my freshman year.”

The contest honors the student founder of the college’s first history club in 2002. Bonnie Spencer subsequently helped transition the efforts of the NTCC Webb Society and Honors Northeast toward feature-length films.  She has also raised and donated funds for activities in history at NTCC.

History at NTCC offers courses in American, African-American, Texas, and World Civilization. The college’s Walter Prescott Webb Society, linked both to Honors Northeast and to the study of Texas history, recently won a Caldwell Award on the state level, for its film on Carroll Shelby. Each year since 2008, students at NTCC have presented works of history nationally, regionally, and locally. Since 2010,  as noted on the Wall of Honor in the Honors Northeast website, NTCC history students have  published twenty-three essays in refereed journals.