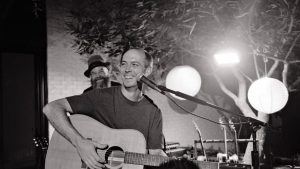 LONGVIEW, TX – The House on 1844, a new music venue in North Longview, hosted Cole Allen (@coleallenmusic) for a sneak peek of his latest album, Dry County Culture. This is the third album for Allen, who was born and raised in White Oak, Texas and typically performs as a one-man band, simultaneously playing guitar, harmonica, and a Farmer Foot Drum. Early in his career, Allen worked full-time as a civil engineer and rode bulls competitively on the weekend. His solo act formed out of necessity because he didn’t have enough time for a band.

“Not only did my strange combination of occupation and interests shape my performance style, but it shaped my approach to songwriting as well,” Allen says. “My songs are the perfect marriage of practical, left-brained structure to adventurous, right-brained storytelling.” 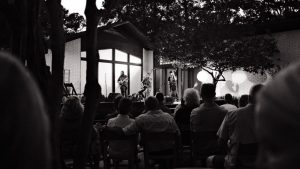 Dry County Culture is a departure from Allen’s previous two albums in that he says it displays maturity in theme, songwriting and production. Notable songs include “Old Oak Tree,” written shortly after the death of his father and “Never Been More Beautiful,” an ode to his wife. In addition to his usual ensemble of instruments, Allen introduced mandolin, upright bass, piano and organ, as well as electric and pedal steel guitars. And while the album’s collection of songs range from introspective to lighthearted, he says Dry County Culture may “sell more Zoloft than beer.”

“It is an album that is well worth a listen on a Sunday afternoon or a late-night drive back home,” says Allen, adding that it will be available in hard copy and ready to stream on July 2. The concert at The House on 1844 was the only way to get an advance preview.

“My good friend Josh launched a new venue and is hosting ‘1844 Sessions’ to help spotlight the talent of East Texas,” Allen says. “It is an amazing setting and to have the support of this community means everything to me.”

Fellow White Oak native Josh Smallwood is the owner of The House on 1844, as well as the custom framing business Smallwoods, and community gathering place 80 Acre Market. His goal with 1844 Sessions is to provide a unique listening space, currently absent from East Texas, inside a mid-century modern-style ho 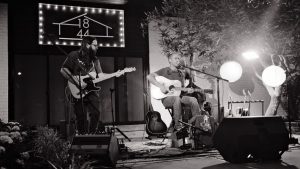 me built by Harold Deteau, designer of the first Wal-Mart. The collaboration with Allen is the first of four 1844 Sessions on the books, with more in the works.

“I’m honored to have Cole be our first artist showcase,” Smallwood says. “There are few people like Cole, who are genuine from the minute you meet them. Not to mention he is extremely talented.”

For now, 1844 Sessions are invite-only. Catering will be provided by 80 Acre Market’s No Name Food Truck but Smallwood says “the main focus will truly be on the music itself.