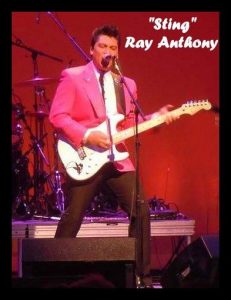 Do you remember saddle shoes and poodle skirts? How about jukeboxes and cars with fins?

Sting Ray Anthony does–although in the 1950s, he wasn’t even a gleam in his father’s eye yet.

But for Trinidad-born, Canada-raised Anthony, it was love at first listen.

His mother, as it happens, was a bit more modern than his father (who favored the standard bearers of the previous era, such as Frank Sinatra and Dean Martin). She was into rock and roll.

“When I was around eight or nine,” says Anthony, “my mom turned me onto the rock and roll stuff.” He then proceeded to buy and listen to every Elvis Presley recording he could.

Anthony turned his love of music into a passion for playing. He got to playing rock and roll music around town and was doing quite well. Then, the movie La Bamba came out.

It was a biopic of the late young California musician who was hitting the charts in the early 1960s with songs that touched a generation, Ritchie Valens. The movie starred Lou Diamond Phillips, and changed the course of Anthony’s career.

“I was already out there playing,” says Anthony, “and when the movie came out, people started saying, ‘hey, you look like the guy from La Bamba!’

With his uncanny resemblance to Lou Diamond Phillips, Anthony literally brings Valens’ music and more back to life.

But if you want to see the real thing, there is Sting Ray Anthony and his Juke Box Rock show.

For those who long to relive the 50s and 60s music of their own youth, and those who are discovering it for the first time, Anthony presents a legendary line-up of songs of the era.

“I’ve been very fortunate to help keep Ritichie’s memory alive,” says Anthony, “and play all kinds of rock and roll.” Anthony has been able to meet and work with several performers of the era, and help introduce them to a new generation of fans.

“I’ve gotten to play on the biggest stages and befriend my heroes,” says a proud Anthony, “Just last week I met James Burton (famously known for working with Elvis); i’ve met and played with and befriended just about everyone who played with Elvis and in that era, including Chubby Checker, Bill Medley, Peter Noone, Frankie Avalon, and even Valens’ sister, Connie.” 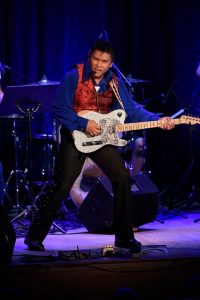 Perhaps the most touching meeting, though, has been Anthony’s encounter at a show in York, Pennsylvania. Gil Rocha, the only surviving member of The Silhouettes (Valens’ original band), was moved to tears of gratitude to Anthony for keeping Valens’ music alive.

“The bottom line of this whole thing that we do here,” says Anthony, “is to keep the music and the memory alive; the music is dying out, the radio doesn’t play it anymore.”

Anthony says his show is old school, it’s entertaining. He talks to the audience and encourages them to sing along. “You wanna get up and dance,” he smiles, “That’s why I’m here–to entertain you!”

“It’s not a serious show,” says Anthony, “I like to have fun! That’s why I keep playing this music … by the time you leave this show you’re gonna be rock and rolling out the door; bringing out the spirit again!”

Along with the vocals of all-girl do-wop band, Shake Rattle and Roll, it promises to be a fun-filled night of rock and roll music.