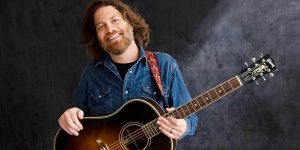 Kevin Galloway poses with his guitar.

Galloway grew up in Big Sandy and Hawkins playing classic country and chasing a career in banking before he moved to Austin in 2002 where he began putting together the band, Uncle Lucius. They really couldn’t have come from anywhere else other than Austin, given the sound of the band. Rooted in the old-time country, blues, and rock of Texas music, dripping with soul, with a groove that made them sound loose but tight, with a jam band mentality that was always going to endear them to the live crowd, Uncle Lucius was the physical embodiment of the Austin independent music scene.

Mark “gum B” Williams self-identifies as “bassist, cellist, and bicycle mechanic in Austin, Texas available for your musical and mechanical needs” and he will accompany Galloway on cello.

Learn more about upcoming concerts and ticket information at WCA under the Bowery Stage section at www.winnsborocenterforthearts.com.