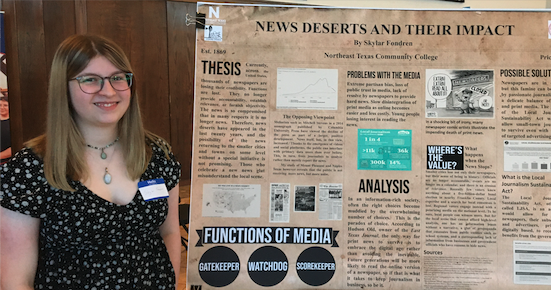 On 6 May, for the fourteenth time, community judges and NTCC honors students converged on the foyer of the Whatley Center for the Performing Arts at NTCC for an annual poster contest.  The scholarly competition was enabled again by generous grants, from Jerald and Mary Lou Mowery of Mount Vernon, and the McGraw-Hill Education Corporation—through the special work of Casey Slaght who works in the corporate office in Iowa.

“This will be close!”—noted the contest’s loyal adjudicator, Andrea Reyes, as she reached the moment when the tabulations of the reported scores in Microsoft Excel could be ranked through the “sorter” function.  She was right.  This year’s contest subsisted amidst one of narrowest bell-scoring curves in the contest’s history. Mean scores ranged from 7.5 to 10.5, with 12 as the maximum score possible, and 9 representing a level of excellence for all rubric scores. 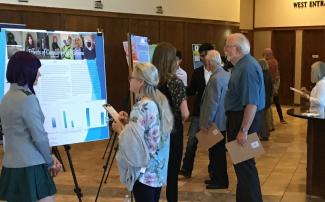 Skylar Fondren, recent winner of a 2022 Britt Poster Award at the Great Plains Honors Council, ranked first in the contest, and won $400 in cash.  Fondren’s story of the emergence of a news desert in Northeast Texas appealed to local concerns.

But at the same time, her research addressed a national discussion concerning changes in journalism spearheaded by a 2014 book by Mitchell Stevens, published by Columbia University Press. Fondren disagreed with the assessment of Stevens that access to news, via live feeds and social media, stands to increase in society.  She noted that many local communities are losing their sense of history, a collective calendar, and a sense of what is important. Smaller locales emanate not more news, but more noise. 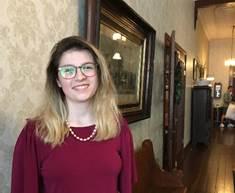 Victor Diaz placed second and won $300.  His work concerned the interaction between student GPA and time spent on social media sites. Diaz’s zeal for the project and sample size enabled a local news bulletin of sorts to sift through the gathering.  Diaz found that students may well want to delimit their visits to Instagram, Snapchat, or Tik Tok. There was an inverse relation between the time spent on such sites, and course grades. 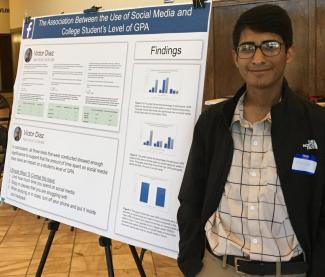 Maxime Risner placed third and won $200.  Her work featured a look at medieval medicine, noting the ways in which Greek texts, superstition, folk remedies, theology, and even astrology all intermingled to produce pseudo-scientific treatments.  One type, called “trepanning,” involved boring through the skull. With doctors consulting astrological tables, and drawing blood to balance “humours,” medicine indeed passed through a scary phase. 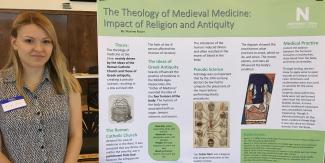 Finally, Bekah Contreras came in fourth, winning $100, with her work on moral systems and romance.  Contreras focused on a seminal recent work by Edward Ruben that equates polarization today, with the emergence of a new moral system–based on self-fulfillment, comingling with an older system—based on a principle of “higher ends.”  Using the novels of Jane Austen, and F. Scott Fitzgerald, Contreras showed that appeals to new moral systems are not new; making that new system based on the need for self-fulfillment work in romance, however, is unlikely.  The greatest novelists of romance could not conceive it.

The particular élan of the contest, and the opportunities presented for student growth arise each year because of the quality of the judges.  This year, Andrea Reyes of Hughes Springs again served as adjudicator and judge, Elaine Beason, Suzy Boatner, Lisa Ellermann, Ed Florey, Dr. Wayne Renning, and Bryan Trickey judged from Mount Pleasant.  Dr. Shirley Clay, NTCC Emeritus Professor, also judged.  Brenda Godoy, an Honors Northeast alumna who has just recently been admitted into Medical School also was on hand to interact with the student presenters.

Honors Director, Dr. Andrew Yox, noted that a “marvelous avidity is apparent when we are able to juxtapose such well-read representatives of our community, with young scholars bearing their own ideas.  The generous awards stimulate still more self-awareness, and achievement.  It is not merely bright students performing well, but a kind of regional Areopagus, a scholarly event, a marketplace where the best creative expressions have an outlet and a reward.”

New Round of UWorld Cares Grants Will Provide $150,000 in Education Funding for Dallas/Fort Worth Organizations