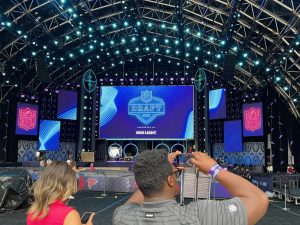 For decades the NFL had wanted nothing to do with Las Vegas and gambling, but when the NFL owners approved allowing the Davis family to move the Raiders from Oakland to Las Vegas things changed quickly and dramatically.

The league partnered with Caesar’s properties as the official casinos of the NFL and things were off and rolling.  The Raiders built their new Allegiant Stadium just off the strip and have completed two seasons in the city.

The 2020 NFL Draft had been scheduled for Sin City, but COVID-19 changed all that.  The decision was made to reschedule the Vegas hosting until 2022 as the 2021 Draft had already been assigned to Nashville.  The 2020 Draft was held remotely with everything done via zoom and Commissioner Roger Goodell announced the picks from the safety of his home.

Things in Nashville went well in 2021 and finally, two years after having to wait, Vegas finally got their chance to host.

Plans were changed a good bit from what was originally planned but an impressive show was put together.

The Mirror had the chance to make it to Vegas on Tuesday of this week to cover some of the media events prior to the beginning of the Draft on Thursday.