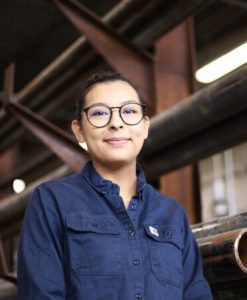 (ROSENBERG, Texas) – Hannah Balli has always liked to work with her hands — especially on cars with her father.

Balli will now have that opportunity through an internship with Phillips 66. Though her father works in the corporate office while Balli will be welding, she is excited for her wish to come true — and to get her foot in the door to work at a refinery.

Her father is excited too.

“As soon as I got the phone call, I ran downstairs and told my dad,” Balli said. “Seeing my dad smile and glow, he was like, ‘OK — good for you.’”

Balli, of Richmond, did not know that her grandfather had been a welder until she started welding herself.

“I was like, ‘When did this happen?’” she said, laughing.

Her parents told her about the family history when she decided to enroll in TSTC’s Welding Technology program after a frustrating experience at another college.

“I was getting discouraged,” Balli recalled. “I said, ‘I wanted to go to school, but I can’t do it.’ My parents said, ‘Remember, you said college or a trade school. If college isn’t for you, find a trade.’”

When Balli first walked into the Welding Technology lab at TSTC’s Fort Bend County campus, she worried about her lack of experience.

“I came with no knowledge, knew nothing, and could not strike an arc the first day,” she recalled. “I was so embarrassed and nervous.”

However, one-on-one attention from her instructors kept Balli going. When she finally mastered the skill, it became a point of pride.

While Balli is a little nervous to be a woman entering the male-dominated field of welding, she encourages other women to pursue it if they are interested.

“Don’t overthink it,” she said. “Once you get the hang of it and your work starts to show that you’re trying your best and doing good, it’ll all be worth it.”

TSTC offers its Welding Technology program at all 10 of its campuses across the state. The program is part of the college’s Money-Back Guarantee, which promises tuition refunds for participating graduates who do not get hired in the field within six months of earning their degree.

In Texas, welders can earn an average annual salary of $47,820, according to onetonline.org, which forecasts the positions to grow in the state by 13% through 2028.

Registration for the summer and fall semesters is underway. For more information, visit  tstc.edu.